Yes, 'The Irishman' Will Be a Killer Contender at the Oscars

Martin Scorsese’s melancholy mob epic, which premiered at the New York Film Festival on Friday, is a film that all awards voters will have to come to terms with 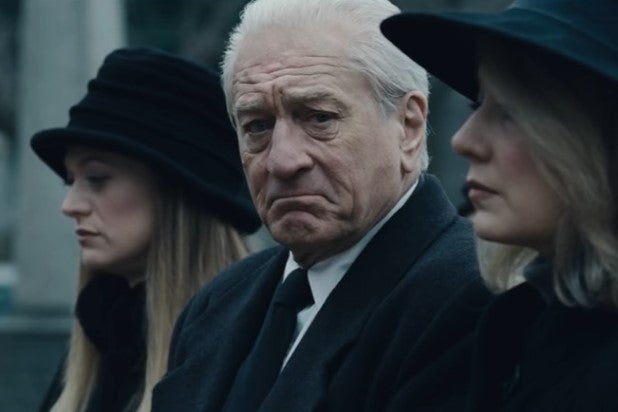 Long before anybody outside of Martin Scorsese’s inner circle had seen “The Irishman,” the gangster epic sat near the top of many Oscar-watchers lists of the films most likely to contend for the Best Picture Oscar.

And now that the film has screened at the New York Film Festival and for critics and journalists in Los Angeles, it’s going to stay there.

Based on the book “I Heard You Paint Houses,” about Frank Sheeran, a mob hitman who claimed he killed Jimmy Hoffa, “The Irishman” is big and bold and monumental, which are usually good things for Oscar voters. Scorsese’s last narrative feature, the Best Picture nominee “The Wolf of Wall Street,” had the manic energy of youth to it, but his new film is a meditative, melancholy old man’s story, which might hit closer to the Academy demographic than “Wolf” did.

Its length and deliberately slow pacing might be a problem for some, and cinematic fact-checkers will no doubt raise questions about the truth of Sheeran’s claim that he shot Hoffa in a house outside Detroit. But as the first batch of reviews pointed out, “The Irishman” is a swaggering, decades-spanning epic that finds room for violent deaths, classic Scorsese conversations and acres of regret and loss; the director shows you the appeal of the life he has so often depicted on screen, and the steep price it extracts.

If you are an awards voter, you need to come to terms with “The Irishman.” And that means it will remain high on this year’s list of Best Picture contenders.

As for just how far its awards reach will stretch, Scorsese is of course a formidable Best Director candidate, particularly since he’s bringing something new to the mob genre rather than simply recycling his past glories.

As the title character and the person who is on screen for almost all of the film’s 209 minutes, Robert De Niro is one of the most subdued hitmen you’ll ever see, and one of the most affecting. His understatement allows Al Pacino to dominate sections of the film as Jimmy Hoffa, simply because Pacino has the loudest, flashiest role and knows exactly what to do with it.

Both men should be strong contenders in the acting categories, with Pacino joining a long list of supporting-actor hopefuls who in many ways are really co-leads: Brad Pitt in “Once Upon a Time in Hollywood,” Tom Hanks in “A Beautiful Day in the Neighborhood,” Anthony Hopkins in “The Two Popes,” Christian Bale in “Ford v Ferrari”…

Pacino’s fiery performance, by the way, could hurt Joe Pesci, who delivers a much quieter performance but one that is just as essential to the success of “The Irishman.” And Ray Romano might shine in a gem of a supporting role as a mob lawyer, but he’ll likely be overshadowed by the trio of Scorsese stars around him, two of them competing in his own category. Bobby Cannavale, Stephen Graham, Harvey Keitel and others will probably meet the same fate.

As for Best Actress or Best Supporting Actress contenders … Well, probably not. This is a story about the guys — and while Anna Paquin may have the best female role as one of Frank Sheeran’s daughters, she just doesn’t have enough screen time to register strongly with voters. (Will the lack of women hurt the film? In some circles, it might.)

One key and widely publicized aspect of the acting is that the lead characters are all de-aged through the use of state-of-the-art visual effects — which, if it is done clumsily or obviously, could either detract from the performances or convince voters that we’re seeing technology, not acting. But the de-aging is for the most part seamless enough to disappear, which should help the actors and could be a mixed blessing for the chances of a Best Visual Effects nomination.

In other below-the-line categories, cinematographer Rodrigo Pietro will certainly be in the running for his rich, burnished camera work, and legendary editor Thelma Schoonmaker should be an easy editing nominee for the way she artfully juggles timelines and multiple flashbacks. Costumes, production design and the rest are likely to be noticed by voters as well.

One more thing: Yeah, it’s a Netflix movie. That means some movie-biz diehards will resist it on general principles, still balking at giving big prizes to the company that’s supposedly helping destroy theatrical exhibition. But let’s face it: If Netflix could win three Oscars, including Best Director, for a black-and-white, foreign-language film (“Roma”) last year, and make a strong run at Best Picture as well, it’s not going to have a problem making a lot of noise with a wildly acclaimed Martin Scorsese epic starring Robert De Niro and Al Pacino.

It’s a long season, but this one is in it for the duration.