'Yellowstone': Is This the End for Kayce and Monica? Kelsey Asbille Says Monica Is 'Done' With the Dutton Family 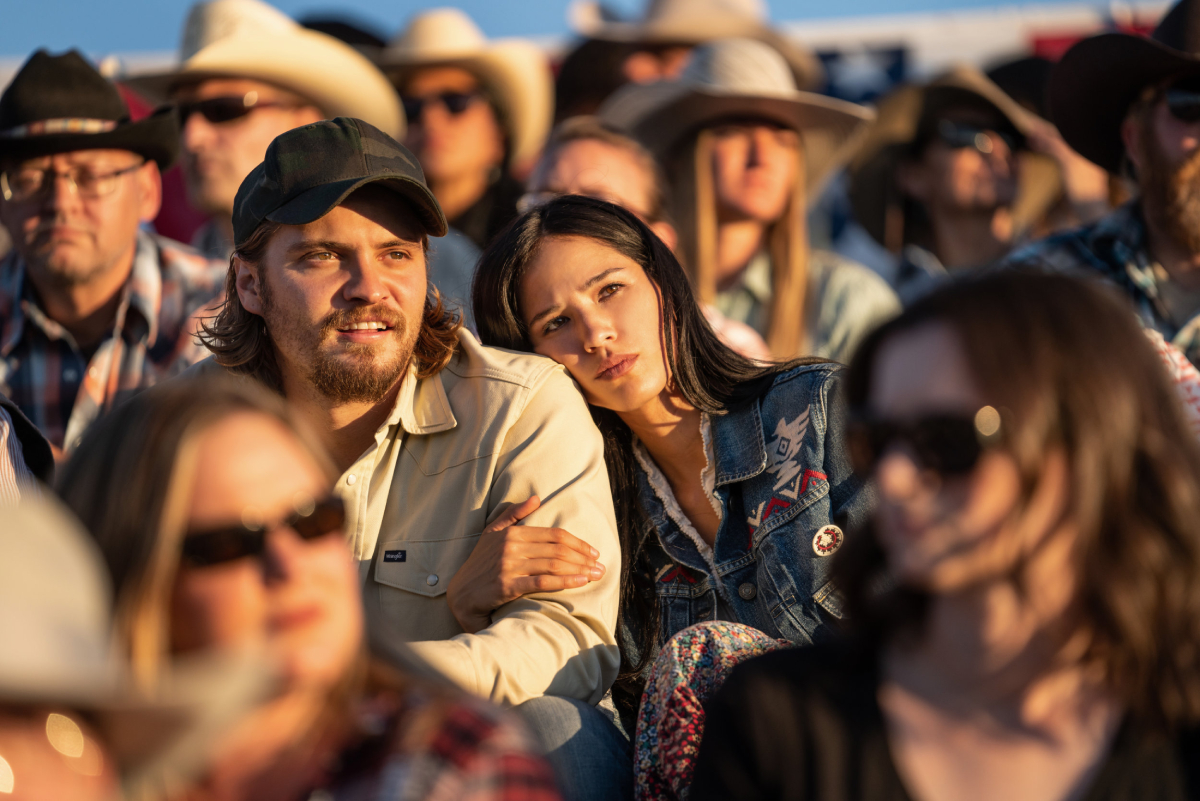 Yellowstone season 4 began with an intruder in the Dutton home. While John (Kevin Costner), Beth (Kelly Reilly), and Kayce (Luke Grimes) were under attack elsewhere, the trespasser on the ranch was going after Monica (Kelsey Asbille) and Tate (Brecken Merrill). Kayce’s wife and son were able to make it out alive. But Asbille says that after this latest incident, Monica is “done” with the dangerous Duttons.

Warning: Spoilers ahead for Yellowstone season 4

During the intense opening of Yellowstone season 4, it looked for a moment as if Monica was doomed. But Tate showed up at the last second with a shotgun and killed the intruder, which allowed the two to make it to safety.

“It’s so intense. We are right where we left off. Monica doesn’t know what she is up against and, so, Tate’s safety is her No. 1 [priority]. It definitely informs the rest of the season, for sure,” Asbille said.

Asbille says that season 4 will feature Monica finally confronting Kayce about his dangerous family and lifestyle. She told The Daily Caller that Kayce and Monica’s marriage is “going to get dark and they’re going to have it out.” Something she says has “been a long time coming.”

“They were both in the [emotional boxing] ring, and Luke and I were up to the challenge. It was a scene we hadn’t done before. It was a conversation we hadn’t had before,” Asbille explained.

Since Monica and Tate moved to the Dutton ranch with Kayce in season 1, the family has dealt with a lot of trauma. In addition to this latest attack, Tate was kidnapped by the Beck Brothers at the end of season 2.

Kayce was able to rescue his son, but Asbille says that Monica is done with the dangers that come from marrying into the Dutton family.

“She is done… I think what she sees in him [Kayce], too, is she sees the Dutton coming out, which is really terrifying for her,” Asbille explained. “She’s always been a person fighting for her family. She wants to be a good mother, so this is really the tipping point and she’s like, ‘I’m out.’”

Another cliffhanger is coming at the end of ‘Yellowstone’ season 4

Asbille promised that the dark turn Kayce and Monica’s marriage takes will mean big changes for the college professor and her son. She also teased that “the biggest cliffhanger” is coming at the end of the season for Kayce and Monica.

“I think that it definitely opens a new chapter for Monica and Tate,” Asbille teased. “It comes with its own crazy cliffhanger at the end of the season. There is something that comes at her that’s unexpected but also kind of playful. It brings out a different side in Monica that we haven’t seen.”

Will Kayce and Monica get their own spinoff?

With another big cliffhanger coming — and the fact that Taylor Sheridan is expanding his Yellowstone universe — is it possible Kayce and Monica will get their own spinoff? According to Asbille, that’s probably not going to happen.

“As long as it’s Kayce and Monica in space,” Asbille joked. “No, honestly, I’ve worked with Taylor for over five years and he’s a really special mentor to me and I’ll follow him anywhere.”