Will Walker Prequel's 1800s Wardrobe Be Made CW-Sexy? 'I'm Definitely in a 20-Pound Dress and a Corset, So…'

When one thinks of a CW series, bulky, constructed frontier dresses and dingy, scratchy-looking shirts don’t ever come to mind. The upcoming Walker prequel, though, will aim to make 1800s fashion as fetch as it can.

Set in the late 1800s and filmed in Santa Fe, New Mexico, Walker Independence follows Abby Walker (played by Arrow‘s Katherine McNamara), an affluent and tough-minded Bostonian whose husband is murdered before her eyes while on their journey out West. After crossing paths with Calian (Justin Johnson Cortez), a curious Apache tracker, Abby arrives in the town of Independence, Texas, where she encounters diverse and eclectic residents — including Hoyt Rawlins (Walker‘s Matt Barr), a slippery rogue, thief and con artist; Kate Carver (Katie Findlay), a burlesque dancer with perhaps too keen an interest in Abby’s origins, Kai (Lawrence Kao), a Chinese immigrant who runs a local restaurant/laundry; and Augustus (Philemon Chambers), the town’s noble deputy sheriff.

Speaking with TVLine in the cast video above, McNamara shrugged off the suggestion of any CW-ified togs, saying, “I’m definitely in a 20-pound dress and a corset!” 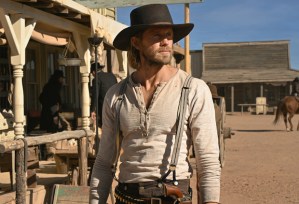 Instead, costar Barr said, the series will give the Old West a fresh look by “[leaning] into a color a bit, in the the way that Baz Luhrmann movies [such as Moulin Rouge and Australia] do.”

So winning is McNamara’s wardrobe, Barr suggested, “no one is going to notice me in a scene!” — to which his leading lady scoffed, “When this guy rides in on a horse, you can’t look at anything else.”

Katie Findlay, who plays burlesque dancer Kate, hails the wardrobe as “fantastic,” though she has to wonder how women of the actual time endured.

“I don’t understand how every woman between 1800 and 1900 wasn’t as serial killer,” the Nancy Drew alum quipped. “It feels like being in a moving circus tent with things trying to take your organs out of you…. I feel like a rock star, but also like I want to die at all times!” 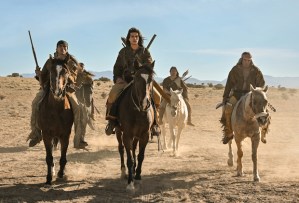 Meanwhile, which cast member felt “like a superhero” on their old-timey get-up? Press play above to hear more from McNamara, Barr, Findlay, Cortez, Kao and Chambers!

Want scoop on Walker Independence, or for any other show? Email [email protected] and your question may be answered via Matt’s Inside Line.