This Morning vet Dr Scott Miller was forced to deliver heartbreaking news to a pet owner on today’s programme, telling the caller that her dog might not live for much longer.

For any pet owner, one of the worst possible moments that they can imagine is the day they have to say goodbye when their pets reach the end of their lives.

On Friday’s edition of This Morning, Dr Scott answered a call from a woman called Alison from Devon, who expressed concern over a growth inside the mouth of her 16-year-old dog Olly.

Alison explained that she first noticed the growth on the inside of Olly’s cheek several months ago, which has continued to grow over time.

However, as Olly is an older dog and has a heart murmur, she was told by her vet that it wouldn’t be safe to operate.

Dr Scott grimaced as he looked at a picture of the growth inside Olly’s cheek on the screen, before sharing his shattering view on the situation. 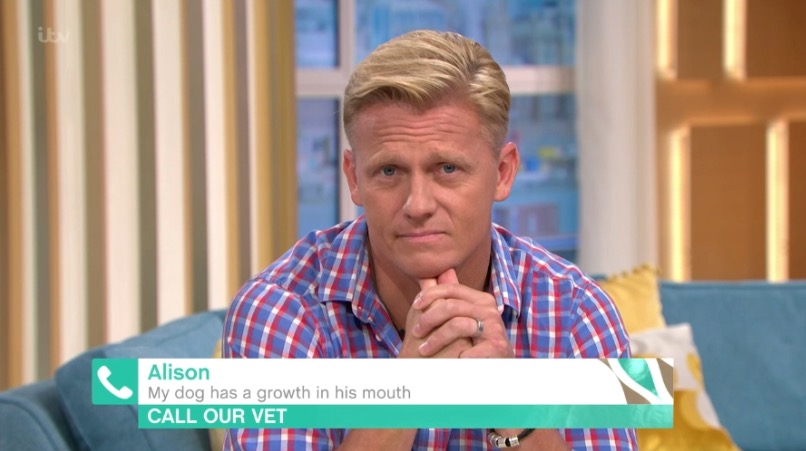 While Alison said that Olly doesn’t seem to be in any pain from the growth, continuing to act as normal in his daily life, Dr Scott told her he ‘doesn’t like what he sees’.

‘I’ve got to say, we don’t want to diagnose things without seeing them, but I don’t like what I see there. That doesn’t look nice, and cancer tends to look exactly as you would think it would look, and that does not look nice,’ Dr Scott said.

‘I would be concerned that that is something significant and the fact that it’s growing quickly in a short space of time also would suggest malignancy.’

Dr Scott acknowledged that Olly is 16 years old, ‘which is an incredible credit to you’, he told Alison.

‘I know he also has a heart murmur which is one of the reasons why you’ve sat on your hands and you’ve not moved forward because of the chance that he might not make it through an anaesthetic. Do you know Alison – my heart goes out to you on this one,’ he said.

Dr Scott looked at the picture, as he continued: ‘That doesn’t look great, and all I would say to you is to focus on the fact that you’ve given him 16 wonderful years, that you want to make sure that his passing is kind in that he’s not in discomfort, in any pain, and I know that you wouldn’t want that for him.’

The vet said that his ‘heart goes out’ to Alison, as her dog’s growth may be ‘problematic’, adding: ‘I’m sorry to say that.’

Several This Morning viewers shared how upsetting they found the news that Alison received about her beloved dog.

‘Gosh you phone in for advice and get told you need to have your 16 year old dog put to sleep ALL my love to that owner,’ one person tweeted.