The very best of the TV Christmas adverts 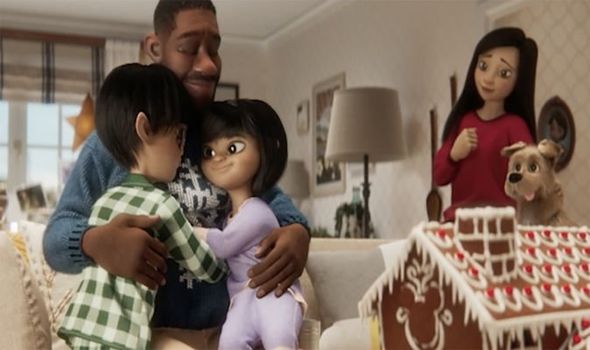 And today one of the most anticipated ones of the year is released – the John Lewis advert. But which of the commercials so far are Christmas crackers… and which ones are total turkeys? We reveal all…

The heart-tugging storyline of the Unexpected Guest – which has parallels with ET – centres on an enigmatic young alien whose spaceship crash lands in woods on earth. Stranded Skye – played by 14-year-old Raffiella Chapman – is discovered by wide-eyed schoolboy Nathan, played by Jordan Nash, also 14, who lives nearby.

Jordan visits his new pal every day and teaches her about festive traditions from the must-have Christmas jumper to putting up fairy lights. Having never seen a mince pie she stuffs a whole one, including the foil casing, into her mouth.

We watch her joy at seeing snow for the first time and the tear-jerking final scene as Skye leaves for her home planet with a parting gift of Nathan’s customised Christmas jumper with a light-up tree design and a star that matches the one on her space suit. As she leans in to kiss him on the cheek, millions will be reaching for the tissues at the emotional ending that has become a trademark of the retailer’s epic festive ad.

The soundtrack – a powerful, stripped back cover of Phil Oakey and Giorgio Moroder’s 1984 hit Together in Electric Dreams by rising star, 20-year-old singersongwriter Lola Young – is destined to shoot to the top of the charts.

The two minute ad airs on TV for the first time during the 8.15pm break in The Daily Mirror Pride of Britain awards on ITV.

Early birds who have My John Lewis loyalty cards can see the ad online from 6.30am today and it will be on their website for everyone from 8am.

Londoner Jordan, who has starred alongside Angelina Jolie and David Oyelowo in fantasy film drama Come Away, said: “Once the ad comes out, Christmas is here.”

And in Hastings, Sussex born Raffiella – known as Raffi – whose list of roles includes playing five-year-old Lucy Hawking alongside Eddie Redmayne’s portrayal of Stephen Hawking in The Theory Of Everything and Claire Densmore in Tim Burton’s Miss Peregrine’s Home for Peculiar Children described the ad as “bittersweet”.

The ad is out around a week earlier than usual but John Lewis denied the date change was to allow people to buy early to avoid shortages on shelves and said it was driven by shoppers who had started searching for festive goodies early following a pared down or cancelled Covid Christmas last year.

Spin-off merchandise is expected to sell out with versions of Nathan’s Christmas jumper costing £29 for adults and £14-£18 for kids.

Families can also “shop the look” of Nathan’s family’s home and buy a decorated tree, dinner table and accessories that feature in the mini-film.And 10 stores will have an interactive experience to get a closer look at

Skye’s spaceship.The ad ends with the tagline “For a Christmas as magical as your first” and Unexpected Guest is a return to the much-loved, heartwarming, tearjerking format that has become a trademark.

Boots has collaborated with Oscar-winning British-Australian film director Tom Hooper – known for The King’s Speech and Les Miserables – on this year’s campaign focusing on the joy of spending time with loved ones.

Called Bags Of Joy, it stars actress Jenna Coleman as Joy, a woman getting ready in her bedroom for a night out.After reaching into a bag given to her by her grandmother, with the note “this is what Christmas feels like”, it begins to produce seemingly never-ending gifts.

Surprised, Joy then tips out the bag on to the bed, leaping delightedly into a huge pile of Boots products including a Dyson hairdryer and a skincare set from Rihanna’s Fenty line.

Then, we see Joy head to a Christmas party, where she pulls a Polaroid camera from the magical bag, gets baubles to decorate the family tree, a cosy hat and scarf set to wear during a spin on aWaltzer at a Christmas fair and even false eyelashes to glam up a snowman.

At the end, we see Joy return the favour to her nan, giving her a bottle of perfume as a gift with a card saying “this is what love smells like”.

“I love Christmas and I’ve always loved Christmas films,” Jenna said. “Celebrating family, togetherness and the simple joy of giving, mixed with a healthy dose of festive magic and charm felt so poignant this year.” While this has a focus on products, the ad – airing on Saturday during the Jonathan Ross Show on ITV – does deliver the touching family moment when Joy reunites with her nan at the end.

Last year the crafting retailer’s advert focused on the fact that despite the pandemic, many of us had found new ways to be creative in lockdown.

This year, Hobbycraft have gone for one that delivers a very simple message, focusing the story around the sense of achievement and happiness you get when you give and receive something handmade.

Called “MomentsWe Make”, the 30-second film is soundtracked by a Leeds-based folk band called The Dunwells, who composed the track of the same name especially for the advert.

During the festive period, the full-length version of the song will be played on Hobbycraft’s in-store radio.

While it is a sweet advert full of nice family moments, it falls a bit flat compared to others which have pulled out all the stops with special effects and storytelling.

This is not just a Christmas advert… it’s an M&S Christmas advert, and for the first time it features their omnipresent oinker Percy, who started off as a bag of sweets and is now found on cakes, cotton bedding and clothing.

Called Percy’s First Christmas, Percy is voiced by Hollywood actor Tom Holland – and it’ll premiere today at 8:40am during ITV’s Good Morning Britain. Percy is joined by comedian Dawn French who voices a festive fairy sat on top of a Christmas tree. She brings the cuddly toy pig to life from his gift box when she accidentally drops her wand in the M&S Foodhall in Stratford Westfield, London after the security guard has left for the day.

Dawn has called her role in the advert “the best gig in the world”, adding: “Christmas is M&S Food, isn’t it? So, when the call comes in asking you to be in the M&S Christmas ad, it’s pretty much a guaranteed yes – I mean they are so iconic each year.”

And Spiderman star Tom said: “When I was asked to be Percy’s first ever voice it took me less than a second to say yes.”

This year’s advert is a very fun idea from M&S and instead of going the tear-jerker route, it is rather a bit of magical escapism… and having a national treasure like Dawn bringing the comedy chops to your advert is always going to be a winner.

It wouldn’t be Disney without a lot of magic, and for this year’s advert the company has pulled out all the stops.

Called The Stepdad, it follows Nicole, the granddaughter from last year’s story that went viral and racked up 106 million views, who is grown up with a family of her own to make festive traditions with.

The three-minute film shows Nicole and her children Max and Ella as new stepdad Mike tentatively moves into the family home and they all navigate their first Christmas together.

It features no dialogue and is instead soundtracked by soul singer Gregory Porter, whose catchy song Love Runs Deeper was written especially for the advert. At its heart is the concept of family togetherness – after scenes where Mike brings in his belongings, we see Nicole reading Max and Ella Disney stories from a storybook that Max received from his birth father.

The stepdad hangs back as he watches his wife read to his stepkids – but as the advert runs its course we see Mike becoming closer to his new family as they begin to share stories with each other.

As they all read, Disney characters including Mickey and Minnie Mouse and Pocahontas come to life on the pages.

The video is also in support of the Make-A-Wish foundation and throughout the advert, there are drawings by kids the charity supports including Max, 13, whose drawing of a cheetah can be spotted on the family’s fridge.

A real tearjerker for a good cause, this advert definitely is one that will warm even the biggest Scrooge’s heart this Christmas.