‘The Rescue’: Thai Cave Rescue Doc From ‘Free Solo’ Directors Overcame COVID and a Messy Battle for the Rights

In April 2021, filmmakers Elizabeth Chai Vasarhelyi and Jimmy Chin were nearly done with their National Geographic documentary “The Rescue,” the first non-fiction look at the dramatic underwater rescue mission that saved the lives of 12 young Thai soccer players and their coach in 2018. The married couple were two years out from winning the Oscar for the daring rock climbing saga “Free Solo” and had made peace with a new project that was devoid of the exclusive access they achieved on their previous effort.

But it was still a frustrating ride. “We never made a film where we weren’t present during the principle action,” Vasarhelyi said in an interview with Chin over Zoom. The pandemic forced them to interview their key subjects, the British divers who drove the mission, from afar. Underwater reenactments were shot with the divers at Pinewood Studios in the U.K. rather than at the actual Tham Luang cave in Chiang Rai. And while the filmmakers expected to find extensive footage from the operation in the possession of Thai Navy Seals, they couldn’t travel to the country to find it.

But then the vaccines arrived. “Once we got our second vaccines, we went to Thailand and found this footage,” Vasarhelyi said. “We always thought it was going to be 30 or 90 minutes or so. It turned out to be 87 hours.”

That turning point sent them back to the edit room to scramble for a final cut, yielding the latest chapter in a filmmaking saga almost as nerve-wracking and unpredictable as their subject. From a battle over rights issues to the story through the sudden discovery of material that upended the final version, “The Rescue” forced the acclaimed directors to adapt to circumstances beyond their control.

“This film was always about working around what we didn’t have,” Vasarhelyi said.

The result provides a thrilling new context to the first-person accounts from the divers, particularly British volunteers Richard Stanton, Jason Mallinson, and Jim Warney. Those men, considered to be the best cave divers in the world, talk through the sheer mania of navigating narrow passages for a rescue effort that could go wrong at any moment. The additional footage recovered this year captures frantic planning sessions surrounding the mission as the team grew.

It also includes both the rousing moment when the boys were first discovered in the cave’s third chamber and prompted to cheer for the international efforts ongoing outside, as well as frantic efforts taking place above water as the drugged children were moved from one cave chamber to the next. “We never had visuals on what transpired inside the cave,” Vasarhelyi said. “That was the craziest thing to see.”

The material also showed how the Brits worked closely alongside a vast network of collaborators that included Thais, Brits, Americans, and others. “It was a treasure trove of footage,” Chin said. “It changed our perception of how much this was a global effort.” 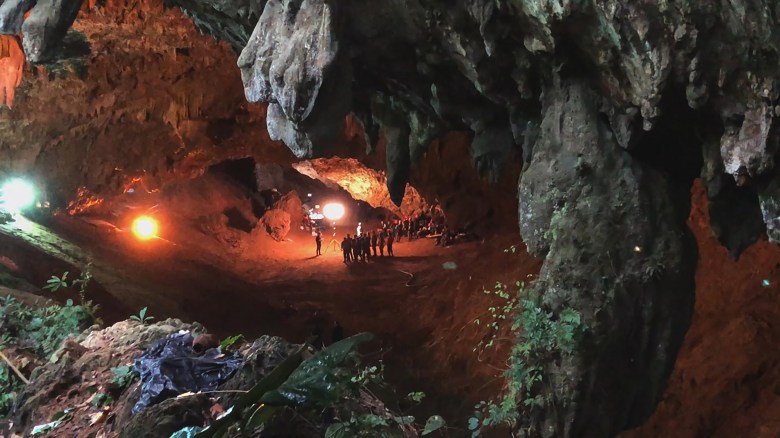 E. Chai Vasarhelyi and Jimmy Chin’s “The Rescue” chronicles the 2018 rescue of 12 Thai boys and their soccer coach, trapped deep inside a flooded cave.

For the world’s greatest divers, finding their target was the easy part; the group then had to figure out a way to get them out of there. That mandated the arrival of Dr. Richard Harris, whose use of anesthetics provided the risky key to extracting the marooned players one by one. In the movie, Harris explains his own resistance to the idea until the very last minute. “The ingenuity involved in coming up with a solution to an impossible situation is the kind of story you dream of finding,” Chin said. “This is a story of common humanity and moral obligations.”

Vasarhelyi put it in broader terms. “What is absolute morality in the post-Trump era?” she asked. “We’re always worried about protecting our own and we all have different political opinions. But thousands of people came together from around the world on this.”

Of course, the story itself wasn’t a secret, and many power brokers scrambled to acquire the rights. “The story is a rights mess,” Vasarhelyi said. “There was a real rush on it after it captured the imagination of the whole world.”

While National Geographic locked down the divers’ story early on, Netflix managed to acquire rights to the experiences of the soccer team. The resulting limited series, “Designated Survivor,” premieres on the service next year. (A biographical drama based on the events, “Thirteen Lives,” is also in the works with Ron Howard attached to direct.) The existence of the Netflix project prevented the directors of “The Rescue” from exploring their story from the perspective of its survivors — although they tried. “We did everything in our power to allow them to give us a minute of a child or parent,” Vasarhelyi said. “It was the most painful creative experience of our lives.”

They felt comfortable with the footage of the survivors that they had since it didn’t dwell on the children as individual characters. “We’ll see what happens,” Vasarhelyi said. “We don’t at all want to get in the way of the significant income the children will gain from participating in the Netflix project.”

They faced a similar conundrum with the absence of underwater footage. “This film is about constraints,” Vasarhelyi said. “The cave is black, the water is so muddy you can’t see your hands in front of your face.” But the divers were able to resurrect many of the scarier moments from the rescue in the reenactments, including one moment in which a diver got lost in the tunnels while dragging an anesthetized kid. “There’s a kind of exactitude to getting things right in our films,” said Chin, looking back on the climbing documentaries they’ve made in the past. “There’s nobody else who was going to be able to show what actually went down aside from them.”

While conducting interviews over Zoom, the filmmakers pushed the divers to go beyond practical details to explain the fear they felt for their families back home. “The compassion and empathy for the children and their parents tied it all together,” said Chin, acknowledging the resonance for the couple, who have two young children. “We could relate to that.”

They also saw a representational value to the overarching drama. “There are very few non-fiction accounts that do well by Asian protagonists,” Vasarhelyi said. “There are really very few that are positive. A lot of them are about positive strength in an Asian environment. This was one of those stories.” As for the connections to the earlier work, climbing docs “Meru” and “Free Solo,” she added: “It was kind of amazing to go from someone free-soloing a mountain to jumping in a muddy puddle. Our strengths are not just in climbing stories but characters facing profound constraints.”

And while they might admire the divers’ efforts, they aren’t quite sure if they’re up for the same task. “The idea of cave diving, where you don’t have a direct access to air, is one of the scariest things I can imagine,” Vasarhelyi said. “There’s no amount of money that could get me to do that.”

“The Rescue” premieres this week at the Telluride Film Festival. National Geographic will release it in October.