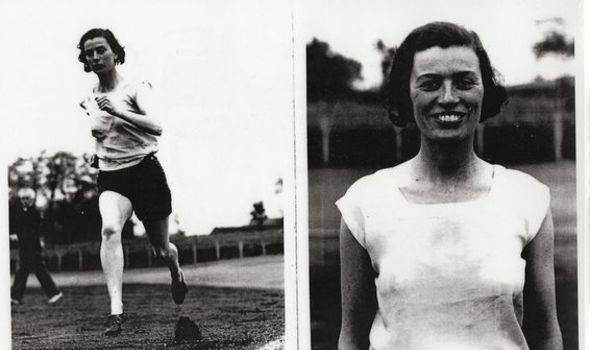 The battered old running shoes that carried a beloved grandmother to Olympic medal glory under the nose of Adolf Hitler have been lovingly restored on BBC TV show The Repair Shop.

Just three years before the outbreak of the Second World War, sprinter Audrey Brown competed for Britain at the infamous 1936 Berlin Olympics, which the Nazi dictator had planned as a Third Reich propaganda coup – a testament to what he believed to be the superiority of his so-called master race.

As the infuriated dictator looked on, Audrey and her teammates snatched the silver medal for the 4x100m relay from the German favourites, whose last runner dropped the baton on the final leg.

The athlete, who died in 2005 aged 92, proved a great inspiration for her grandson Tom Wenham, a former England lacrosse player who is currently coaching Team GB men’s lacrosse for next year’s World Games.

Audrey, who had three children, four grandchildren and nine great grandchildren, enjoyed a lifelong love of sport, starting out as a keen university hockey player before turning to athletics and winning numerous other international medals.

It was a passion she loved to share with Tom, so he was honoured when she bequeathed to him the precious bespoke leather running spikes that she wore on the medal podium in Berlin.

Sadly though, they were so severely damaged that he hardly dared touch them.

The 49-year-old dad-of-two from Ilkley, West Yorkshire, says: “Sport’s been an enormous part of my life, all absolutely driven by my gran. Her running shoes represent her igniting that fire.”

So it was a huge responsibility for expert cobbler Dean Westmoreland when they landed on his workbench on BBC1’s The Repair Shop, to be screened tonight.

Dean describes the 85-year-old leather as “very thirsty”. He had to stabilise it and hand-stitch new soles. “I’ve worked on running shoes but nothing of this age, it’s a challenge,” he says.

“I believe they used kangaroo leather. It was very thin and very strong and it molded to your foot nicely.” Tom says: “My gran gave me those shoes wrapped in a tea towel in a carrier bag. She gave them to me with no fanfare. They were never on display.

“I’ve also got her Olympic tracksuit top and medal certificate and the suitcase she took to go from Waterloo to Berlin, covered in all the official stickers.

“There are a lot of gran’s stories and our memories tied up in those shoes. You can picture her wearing those, pulling them on for an Olympic final, that’s something truly special. She would have been enormously proud.

“Hitler was there and watched my gran run. The German team were nailed-on favourites for the gold, then dropped the baton in front of Hitler. America took Gold, Great Britain took silver and Canada won bronze.

“Gran’s medal was not presented to her by Hitler – in hindsight something she was quite happy with – but she was certainly aware of the enormous significance of the event.”

The 1936 Olympics were a massive personal event for the Brown family too because Audrey’s brother Godfrey won a gold medal in the 4x400m relay and silver in the 400m. Their brother Ralph, a hurdle champion, had also been expected to do well but was forced to miss out through injury. It was at those historic games that the black American athletics legend Jesse Owens won four gold medals, delivering a devastating blow to Hitler’s myth of Aryan supremacy.

Audrey, who ran for Birchfield Harriers in Birmingham, which also boasts Olympian Denise Lewis among its alumni, always wanted to champion women in sport.

After her athletics career, she worked at the Rowntrees factory in York, later going on to be made an MBE for services to family planning at Brook Advisory Clinics.

Tom says: “In her sporting and working life, my gran was interested in opportunity and equality for women. She came from an era where women’s sport just wasn’t taken particularly seriously and that idea of her being able to support and inspire other young girls to get involved in athletics, I know that would be hugely special to her.”

It was only when Tom became a teenager that he started to become aware of his gran’s sporting background. He says: “Growing up she was just my gran, she was a fantastic cook and just didn’t look like an Olympic sprinter.

“My mum remembers being in fear of being late to catch a bus because gran would grab them by the hand and sprint, dragging them down the street.

“Watching sport with my gran, particularly the Olympics, was like having Google next to you. Gran knew everybody’s time, she knew who was likely to win, who had done well in the heats. She had a real grasp of the intricacies of track sports and could talk tactics.

“We would have her round for Sunday lunch and quiz her, listening to all her stories. She talked a lot about the pride of competing, although she certainly did feel uncomfortable about some elements of the event, with Hitler using it as a propaganda machine.

“But she was very proud to be selected to represent her country. My gran had some deafness so she often talked about how she had real trouble hearing the starting pistol and always had to react to the other runners.

“She also told us how the tracks were made out of crushed cinders and you had to dig out your starting point with a trowel.”

Tom adds: “She was a trailblazer but did everything with huge humility. We had to piece together her amazing life as she never shouted about it.

“She once mentioned that while staying in a hotel in Princeton University, America, with my grandfather for his work, an annoying man in the apartment above would interrupt her phone calls home and ask the switchboard to prioritise his call. It turned out that the man was Albert Einstein.

“Gran would be enormously proud to see her shoes restored. There’s nothing more personal to an Olympic sprinter than their running spikes. They are part of her sporting history.

“I felt it really brought to life what it must have been like for gran to wear them. They never really looked like running shoes, just pancake pieces of leather.

“It was touching that Dean put so much time into repairing them. Now they can be put to use and help to bring her story to life for another generation, perhaps as part of an exhibition.

“We’d love to have them on display. They are her legacy.

“It was emotional seeing them and brought back happy memories of me being with Gran.

“Now they can be put to use and help to bring her story to life for another generation.

“I do think that if Gran thought that one young person, in particular one young girl, was inspired off the back of her story, she would feel that was something really special.”