The Flight Attendant Season 2 Finale Recap: The Blonde Leading the Blonde — Plus, a Blast From Cassie's Past!

This Thursday in The Flight Attendant‘s Season 2 finale, a shellshocked Cassie tried to make sense of Grace’s shocking act, before finding out who is really behind her gaslighting. Plus, a new adversary surfaced!

Following the very worst Ferris wheel ride ever, during which a conflicted Grace decided to turn her gun on herself rather than take out her crafty coworker, as hired, Cassie somehow had the presence of mind to negotiate Megan’s surrender to a hospitalized Shane. Megan, who still has the would-be assassin locked in her car trunk, agreed to share everything she knows about the South Koreans’ illicit information network, in trade for WITSEC protection for her, son Eli and husband William, in an idyllic suburb.

CIA boss Dot showed up at the hospital to escort Cassie back to the agency for a debrief, but when they hit traffic, Dot suggested they stop by her home so that blood-spattered Cassie could clean up. There, Cassie discovered in Dot’s medicine cabinet the tell-tale, pricey perfume that she smelled on the incriminating wig, airline uniform, View Finder et al from Episode 1 — meaning, Dot had been her murderous doppelgänger all along! Alas, Cassie (she of zero poker face) was called out by Dot right after she phoned Max to set off Dot’s home alarm (to little effect), and before she could escape. 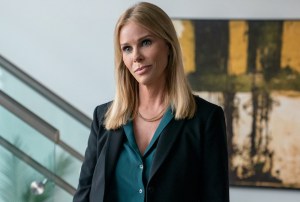 Sliding her blazer open to clock her handy sidearm, Dot ‘fessed up to zeroing in on Cassie as an easy patsy, given her propensity to “solve puzzles,” lie to the FBI, and reliably stick her nose where it doesn’t belong.  Dot also made clear that if Cassie tried to charge her, the eventual ballistics would show that she shot her in “self defense.”

But Cassie — emboldened after berating Dark Eyeliner Cassie in the mind palace — found the wherewithal to snipe at Dot, contending that no one would never believe the “f–king bulls–t” coming out of Dot’s mouth. Dot begged to differ and unholstered her weapon, at which point Cassie reached for the personal safety alarm in her coat pocket and activated it, deafening/distracting Dot just as two agents walked in. Dot tried to sic the men on a fleeing Cassie, but they in fact were there to arrest Dot for treason and murder, after getting tipped off by Agent Barry.

In the aftermath, Benjamin explained to Cassie how he began accumulating various clues pointing to Dot’s guilt and her grander scheme of selling access to CIA files. The two then agreed to forget about their impetuous hook-up as they continue to work together at the agency. 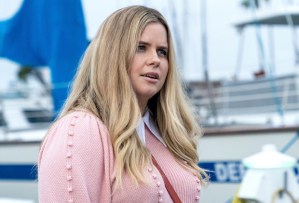 Cassie’s woes were far from over, though.

As she caught up on a series of frantic texts from Davey and calls from Rick about his missing husband, Cassie received a call from Jenny, the crime podcaster from AA. Jenny claimed that Davey was at her place, anxiously pacing her backyard/distraught about something. But when Cassie arrived at the house belonging to Jenny’s “late grandmother,” she instead found Davey drugged and unconscious on a sofa, after which Jenny locked the three of them in the small room. then focused on an elaborate “murder board” on the wall behind Jenny, which detailed the flight attendant’s assorted misdeeds and covert antics. Beside it was a shrine of sorts, dedicated to… Feliks, the dashing assassin from Season 1!

Long and very twisted story, short: Jenny is no podcaster, crime or otherwise. She instead is just someone who became a groupie of Feliks’, after reading about him on a blog. Feliks proceeded to manipulate Jenny into entering Cassie’s life (she’s no alcoholic, either) and gathering information. Through prison visits, phone calls and letters, Feliks eventually coached Jenny to believe that if Cassie was really out of the picture, maybe he could “love again.”

Now, Jenny aimed to take out Cassie, using a hammer. Cassie eluded Jenny best she could and, after doing away with her assorted mind palace demons, tried to talk rationally to her as Davey, who had thankfully come to, sneaked up on his captor and clobbered her with a skillet. For good measure, Cassie crashed a vase on Jenny’s noggin, KOing her good.

With Cassie’s Season 2 woes now truly and fully dealt with, a happy-ish montage followed, in which Megan entered her aforementioned WITSEC life… Brenda stopped by Cassie’s to mark her sponsee’s 30-days-sober milestone… Cassie phoned her mom to apologize for hurting her “a lot” over the years and reasserted her intention to (eventually) better herself — and a moved Lisa in turn said she hoped they could talk again “very soon,” and then exchanged ILYs with her daughter.

The action then shifted to a cheesy Las Vegas wedding chapel, where Annie and Max tied the knot in front of a guitar-strumming Elvis, while Cassie learned from Shane that because she helped put away Dot and save many CIA agents’ lives, their unpredictable civilian asset is now “golden” at the agency.