Tess Daly, 51, was once again on hand to host proceedings on Strictly Come Dancing as the remaining 11 contestants took on Movie week. One performance which stood out from the rest was Made in Chelsea star Jamie’s after he performed a Charleston to the soundtrack of Disney’s Hercules. However, the routine was rather comedic and had the presenter and the judges of the BBC dance programme in hysterics, which led to an unfortunate blunder unravelling. 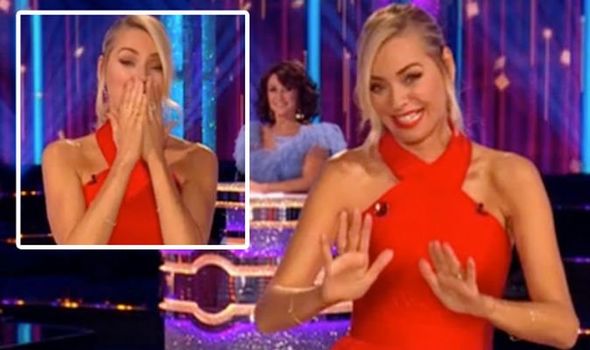 After Jamie and his professional dancing partner Karen Hauer, 38, received their scores from the panel, it was time for the host to welcome the next couple to the dance floor.

Unfortunately, she was caught completely unaware as when she returned to the screen, she was still laughing and almost choked on her own saliva.

Tess seemed quite composed but as she tried to introduce Clara Amfo, 36, her voice went off-piste before she put her hands to her mouth.

“Excuse me, but Jamie in that wig,” she said before carrying out her duties but she still had to issue an apology.

“Sorry,” the presenter whispered to viewers watching at home as the sequence rolled to bring the next couple to the stage.