“Do you believe in ghosts, Ted?” Ted Lasso’s boss, Rebecca, asks him in the first episode of Apple TV+’s Ted Lasso. “I do,” Ted replies, “but more importantly, I think they need to believe in themselves.”

Rebecca (Hannah Waddingham) has hired Ted (Jason Sudeikis) — a second-tier American college football coach with no soccer experience — to coach her Premier League club, AFC Richmond, as part of a clandestine plan to sabotage the team and punish its biggest fan, her adulterous ex-husband. She takes Ted’s joke about ghosts as confirmation that she has chosen the right idiot for the job. And in the series of ads for NBC Sports’ Premier League coverage that introduced Ted to the world back in 2013, that’s all he was. But by the time Sudeikis, Scrubs creator Bill Lawrence, and others brought Ted back to star in his own series, he had become a lot more than the yokel Rebecca took him for. He was someone who wanted not only ghosts, but everyone, to believe in themselves — in a way that felt aspirational rather than ridiculous.

It’s unclear if Ted is actually a good coach, at least when it comes to X’s-and-O’s strategy. (His main goal of Season One was just getting selfish star Jamie Tartt, played by Phil Dunster, to make the extra pass on offense.) But he is unequivocally a good man, in a way that made the series Apple’s first word-of-mouth phenomenon.

For the past two decades, television has been defined by its antiheroes — from fictional icons like Don Draper to reality-show staples like Simon Cowell and comedic figures like Larry David. Some of this was a response to the way that TV of the previous century prized likability above all else. But over time, it became a market overcorrection, with shows about morally gray figures feeling just as tired as the ones about nice guys. Tony Soprano liked to ask, “What ever happened to Gary Cooper?”(*) Somehow, our Gary Cooper turned out to be a mustachioed, underqualified soccer coach, with Ted’s fundamental kindness and empathy feeling like a radical choice in this era of TV.

(*) Despite their wildly different temperaments, Ted and Tony do have one thing in common: a penchant for the occasional panic attack.

“I believe you can outscore your opponent and still lose,” Ted tells sportswriters, “just like you can score less than them and win.” When coaches talk like that, it’s usually code for some kind of repressed, hypermasculine ideal of a bygone era. But with Ted, it’s about a genuine, radiating desire to help the people around him be their best selves, scoreboard be darned. He is curious about everything and everyone, and polite and caring in ways that Rebecca and the players keep assuming is a put-on, because who could possibly be this friendly all the time? He styles himself like Burt Reynolds without becoming prisoner of the sport’s clichéd macho ethos; at one point in the upcoming second season (debuting July 23rd), he even tells two feuding players to “get together and woman up.” When one asks if he means “man up,” he replies, “Y’all been manning up for a while, and look where that’s got you.”

That first season smartly acknowledged the downsides of pathological decency — Ted’s wife leaves him because she feels smothered by his attentions, and she’s presented sympathetically — but for the most part it was a Jason Sudeikis charm offensive. And bit by bit, Ted brought everyone — Rebecca most of all — to his side. “He thinks he’s mad now?” he says after meeting perpetually surly, past-his-prime midfielder Roy Kent (Brett Goldstein). “Wait’ll we win him over.”

Season One concluded with Richmond suffering relegation — demotion to a lower league as penalty for a poor record — but also with Ted having convinced them all to join Team Nice, determined to win their way back into the EPL. With Rebecca’s scheme abandoned, Season Two seems to open without any strife at all. Roy is retired and Jamie is starring in a reality dating show, and the Richmond players and management are all on the same page. When Ted arrives in Rebecca’s office each morning, she, general manager Higgins (Jeremy Swift), and marketing guru Keeley (Juno Temple) greet him like he’s Norm from Cheers. The players are constantly smiling, and Ted and assistant coaches Beard (Brendan Hunt) and Nate (Nick Mohammed) are so in unison they practically communicate with twin-speak. For a hot minute, it feels as if Sudeikis, Lawrence, and company saw how viewers responded to Ted’s goodness and decided to give them more of what they wanted, the narrative necessity of conflict be gosh-darned. If a comedy where everyone gets along all the time can still be appealing and funny(*), why does anyone ever need to get mad with one another? 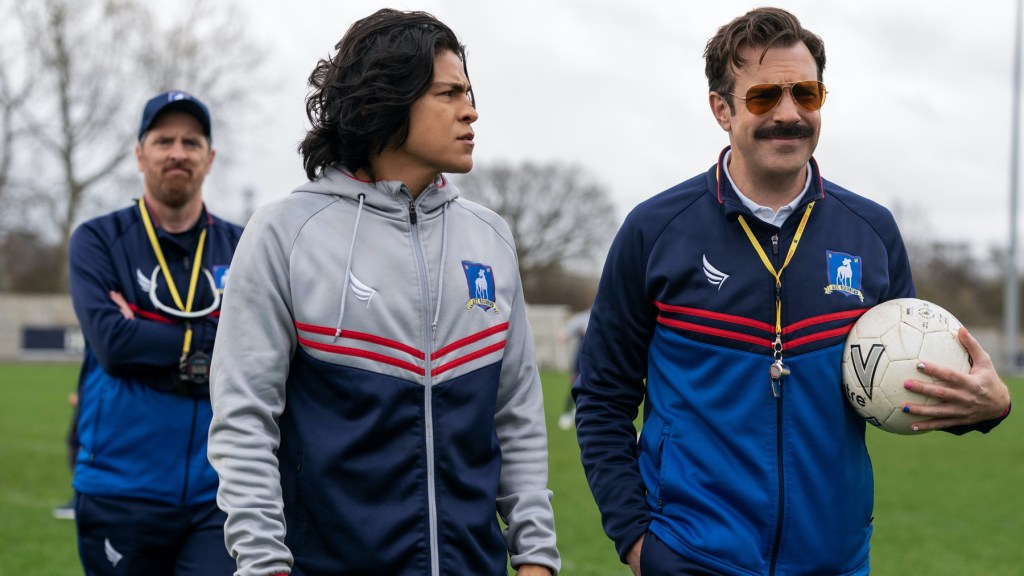 (*) If I had a quibble with Season One, it was that it rarely made me laugh, outside of the exuberant antics of Cristo Fernandez as new team addition Dani Rojas. Season Two takes the leap you often see at this stage of ensemble comedies (see also The Office, Parks and Recreation, and, recently, fellow Apple show Mythic Quest) where both the audience and the creative team better understands what makes each character tick and why they’re funny in various combinations. It’s a more consistently amusing show this year without selling out any of the characters in search of a punchline.

But there’s conflict in the new season. It’s just sneakier and even truer to the show’s larger themes than Season One‘s unapologetic rehash of the plot of the 1989 baseball film Major League. Rebecca hires pre-eminent sports psychologist Dr. Sharon Fieldstone (Sarah Niles) to work with the team, and Fieldstone proves both immune to and skeptical of Ted’s relentless schmoozing. She is treated not as a villain, but as someone who can see the title character with a clearer perspective than the co-workers and friends (and, for that matter, viewers) who just want him to make them feel better. When he asks for her assessment of the team after a few days, she notes, “There’s a wonderful atmosphere here. All the employees are thoughtful, and kind. And they actually listen to each other.” But then she adds that the team has yet to win a game this season, and wonders if perhaps there can be too much of a goodness thing in the competitive world of professional sports.

These episodes don’t lean too hard on this tension. For long stretches, it’s easy to luxuriate in the pleasure of seeing people get along, even when they’re trying not to. Roy takes up coaching his adorable niece’s team, and as he’s cursing the little kids out like the legendary hard case he was on the pitch, they can’t help but beam at him. Ted learns how to do girl talk when Keeley’s not available to help Rebecca make a romantic decision, and there’s an utterly charming, blatantly Frank Capra-esque — to the point of Ted watching It’s a Wonderful Life — Christmas episode. But the sentimentality of Capra only worked because he laced his films with plausible darkness and human emotion. While Ted Lasso doesn’t have its characters attempting suicide like poor George Bailey, it remains keenly aware that everyone gravitates to Ted because they need something happy in a world with so much misery to offer. And every so often, we get hints of what this upbeat persona costs both Ted and the team. At one point, Roy suggests that Ted has ruined one of his players by making him too generous and sweet, and the show very much agrees with Roy.

Confronting the fundamental flaws within a vibe that made Ted Lasso — both man and show — so beloved, without ruining that vibe in the process, is an incredibly delicate task. The start of Season Two stumbles occasionally — there’s a conflict with a sponsor that should be a much bigger mess, but instead gets forgotten instantly — but for the most part, the creative team handles this tough new assignment with the kind of aplomb that would merit enthusiastic attaboys from Ted, along with an obscure pop-culture reference from decades past. (After dropping an H.R. Pufnstuf punchline, he adds, “That is a joke for people born in the early- to mid-Seventies!”)

A few months ago, a handful of Europe’s top clubs attempted to form a new “super league” that would forgo relegation, which is both a crucial part of how the sport works in most of the world and a key story point on Ted Lasso. The craven, anti-competitive spirit behind the endeavor inspired so much protest among fans that the super league collapsed within days of its announcement. Once, that would have seemed too Pollyanna-ish a plot twist for real life. But in a world that’s given us Ted Lasso, anything seems possible.