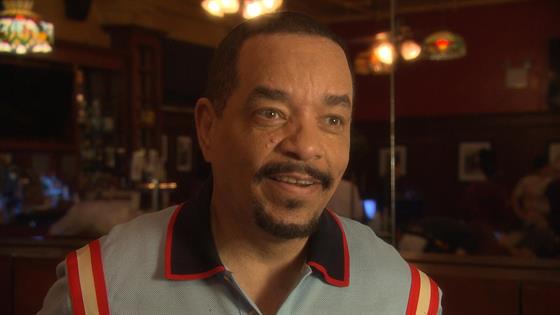 Law & Order: SVU “dun dun” made history. With the Thursday, Sept. 26 episode, Law & Order: SVU becomes the longest running primetime drama, usurping the title from Gunsmoke and the mothership Law & Order series. The milestone has been on the minds of the cast members.

“I came on SVU to do four episodes, so here I am now 20 years later, just still kind of living the dream. It’s a great thing. It’s a great crew, a great cast, and as long as they keep writing these stories, I think we’ll be on the air,” Ice-T told E! News during a set visit while the cast filmed the season 21 premiere.

Even though he’s a seasoned veteran, Ice said he still worries about his character Sgt. Odafin “Fin” Tutuola.

“I mean, I just hope I don’t die. That’s pretty much Ice-T’s view on Fin. If I make it to the end of the 21, I can make it to the 22nd season. So, whenever I get shot or something I quickly go through the script, ‘OK, alright. I’m back breathing. I’m cool.’ I don’t want Dick Wolf to throw a curve ball!”

Peter Scanavino, who joined the squad as Det. Sonny Carisi in season 16, making him the newest addition, said the night before the renewal announcement he spoke to Wolf and “that’s when it got real.”

“It’s incredible,” Kelli Giddish, who joined the cast as Det. Amanda Rollins in season 13, said. “When I signed for this show, I never expected to be part of something that’s become a legacy…I’ve changed so much, the show keeps evolving and that’s what’s so exciting.”

Click play on the video above to hear more from the Law & Order: SVU cast, including whether there’s still hope for a Rollins and Carisi pairing.

(E! and NBC are both part of the NBCUniversal family.)