Strictly Come Dancing’s sister show It Takes Two treated BBC One viewers to a sneak peek behind the scenes of Saturday night’s live show earlier this evening. And the clip showed the celebrities in the hair and makeup chairs, trying on their costumes and taking part in a dress rehearsal. But during one moment, Kevin Clifton was seen asking his fellow dancers and the crew of the show where Anneka Rice was.

Host Rylan Clark-Neal introduced: “Well, there was a load happening on the dance floor this weekend, there was also quite a lot going on behind the scenes as well did you know? And guess what? Our cameras were there to catch it as well! Let’s take a look.”

The sixteen celebrities were seen arriving at the studios, practicing their routines, and getting themselves spray-tanned and slammed up.

During one moment Kevin is seen talking to Emma Weymouth: “You look very dapper,” she compliments the 2018 winner.

“Just one of these old things I threw on!” Kevin replies in reference to his black tie suit. 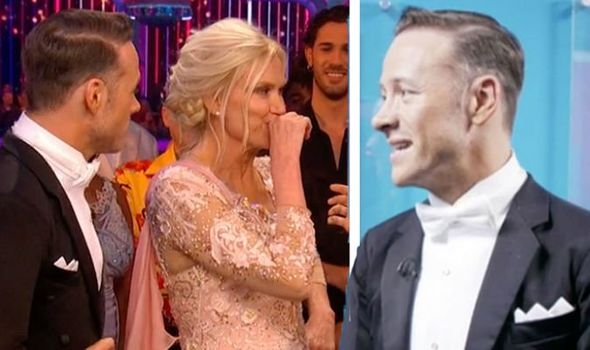 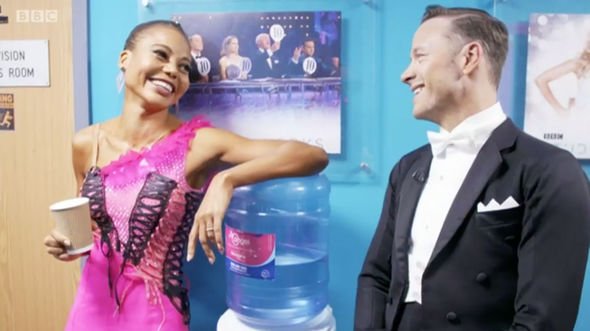 After laughing in response, Kevin changes the conversation and says: “Have you seen Anneka anywhere?” And Emma answers “no”.

The clip then shows many of the professional dancers and contestants walking down the corridor towards the studio.

And when it’s Kevin’s turn to enter the doors, he questioned his partners whereabouts again.

“Anyone seen my partner? Anneka?” Kevin asked around. 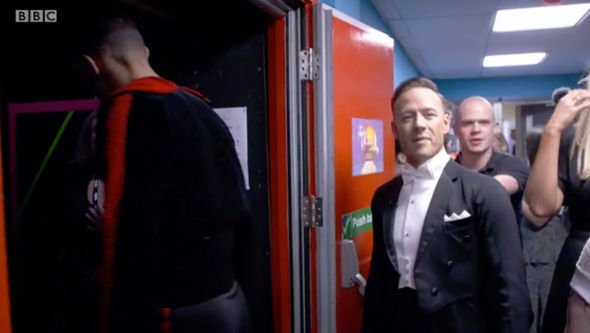 It comes after Kevin and Anneka danced the Waltz on Saturday night to Run To You and was awarded a combined score of 19 points.

“I am really really proud of you! That was great, well done!” Kevin praised the Treasure Hunt star seconds after the music finished.

As for what the judges thought, Bruno Tonioli was first to give feedback and he said: “First you look fabulous on the dance floor in that frock! I have to say you should be proud of yourself because we actually had some very nice moves out there.

“I could really see you were very hard on the footwork and it showed. One thing, your top line, you start all tense, don’t tense, relax, breathe, keep your shoulders down  with a nice long line.” 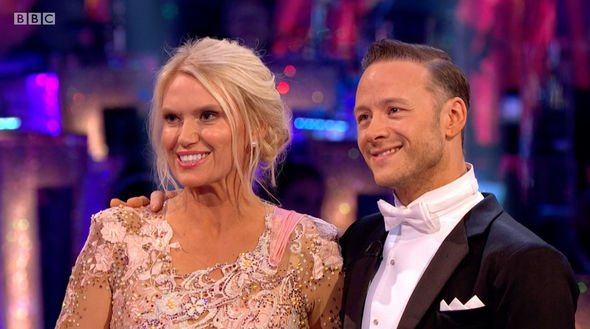 Craig Revel Horwood kicked off with criticism and said: “For me it lacked rise and fall, which is normal because this is the first time you’ve done the Waltz.

“You lacked a bit of flow at times, your arms always need to dance into position, but I think you’ve worked miracles Kevin! I really do.”

Newcomer Motsi Mabuse added: “You’ve made such a huge improvement, you have everything under control. It was simple but beautiful.”

“Do you need to improve on your footwork? Absolutely. Could your frame be better? Absolutely.

“But I think you should pat yourself on the back today because from last week to this week, it’s miraculous!”

Elswhere on It Takes Two, Anton Du Beke had to put Rylan straight when the host spoke about last year’s run of bad luck.

Strictly Come Dancing returns on Satruday night and It Takes Two airs weekdays at 5.15pm on BBC One.