Station Eleven: How the Brilliant Episode 3 Explores the Miraculous Tragedy of Art

On Friday, December 17, HBO Max released the first three episodes of its dynamite limited series “Station Eleven.” The cast is populated largely with relative unknowns and a few familiar faces, including Gael García Bernal (“Mozart in the Jungle”) and Mackenzie Davis (“Halt and Catch Fire”). But in Episode 3, “Hurricane,” a supporting player takes center stage and serves as the catalyst for the core story the series aims to tell.

Miranda Carroll, embodied by a magnificent Danielle Deadwyler, is alone. Even when surrounded by people on a crowded bus, or riding the “L” train, or at a dinner party, or in her lover’s bed. There is always a distance and we, as the audience, have no idea why. In the vast majority of her screen time, even in conversations, Miranda is seen alone in shots, often with a significant buffer between herself and the frames’ edges.

It would be easy to dismiss Miranda’s way of moving through the world as standoffish, if it weren’t for the fact that early in the episode, during a job interview, she states that her strongest quality is listening. And that’s exactly what she does in every scene.

In another performer’s hands, the logistics expert/graphic novelist might read as cold or disinterested, but Deadwyler — who deserves every possible acting award she’s eligible for — radiates a warm, if wary, energy. She is engaged with what’s going on around her, absorbing what she sees and repurposing the emotions in her work.

Even at a dinner party in which her husband’s co-star (and eventual second wife), Elizabeth (Caitlin Fitzgerald), gushes about spending time in Prague and getting lost in the world of the paintings, it’s Miranda who gently reassures the woman that her feelings are valid, not silly.

Broadly speaking, “Station Eleven” is about the creation of art. And the creation of art involves the artist absorbing elements of reality, then reflecting them back into the world around them. This is what Miranda does. She listens to people. She reflects them back to themselves. And then she absorbs those conversations into her art, a graphic novel that ends up nearly as important to post-apocalyptic society as the works of Shakespeare, through a cosmic accident.

That’s the dream for any artist, right? To pour your heart and soul into your creation only for it to resonate long after your own life has ended? 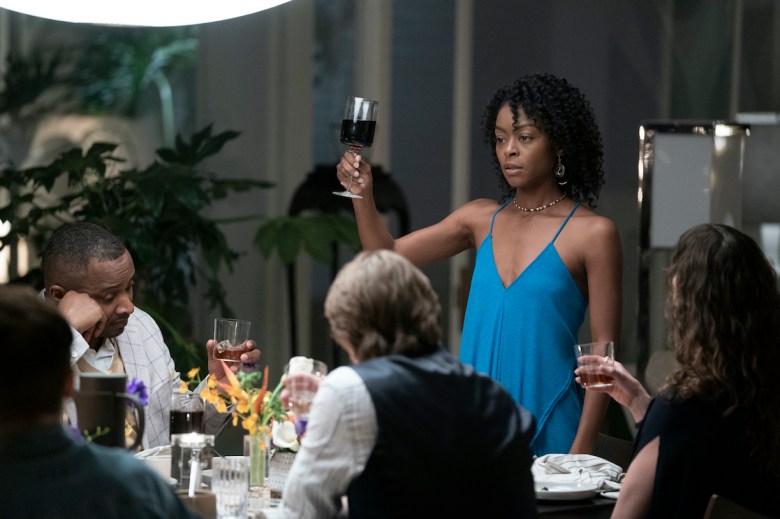 Theoretically, yes, of course. But when push comes to shove? Maybe not.

Throughout “Hurricane,” we see Miranda toiling away on her book, “Station Eleven” — during quiet moments in bars, in booths at underpopulated diners, in the gorgeous pool house she shares with Arthur during her marriage. In these moments she’s guarded, protective of her privacy and her process, unwilling to share information about her work with anyone, even those dearest to her.

She’s so dedicated to this ideal that it spurs her break-up with Arthur. “Love will try to see the words before it’s finished,” Deadwyler’s narration intones during a moment of betrayal, her voice low, resigned to the predictable fallibility of the human heart.

It’s about the work. She has to do the work. And once the work is completed, only then can she live.

This is how Miranda has chosen to process her damage and what she believes she must accomplish before she can come to terms with her unfathomable pain. So she proceeds with her plan, head down, toiling, perfecting, and eventually completing. She returns to Arthur with a few copies of the graphic novel. He invites her to dinner. She has a flight to catch but promises she’ll return. Finally, living.

And here is where Deadwyler truly shines. Because Miranda never gets that chance to start living, her plans, everyone’s plans have been disrupted by a flu that will reshape the trajectory of humanity and, in reality, Arthur is already gone. Dropping dead during his opening night performance in “King Lear.” A tragedy.

In a pointless business meeting with Chinese executives in which everyone involved has accepted that they are in the closing moments of their lives, Miranda cracks, vacillating between stoic resolution, intractable sobs, and hysterical laughter. She questions her choices. Her life. Why she got in a plane instead of being with the man she loved at the moment of his death. This is the core of Miranda laid bare, a reckoning of all she had believed to be true held in stark contrast to the way things are. She completes the work, but misses the chance to live.

And yet, within an imperfect life, Miranda has crafted a legacy. She has created a paean to loss and damage so pure and so recognizable that it outlasts not only her life, but the lives of millions of other people. It is transformed into something more: a religion, a prayer, a mantra, a hope, a captured shred of truth that speaks to those who have survived the unthinkable.

What “Station Eleven” (the series) understands so clearly is that art can be a legacy that shapes the future of humanity, and so can love, community, and connection. What binds us together, whether the words of William Shakespeare or Miranda Carroll, is what outlasts us all. It is the work. It is life. It is.

And that’s what makes it so goddamn beautiful.