The town of South Park is on the brink of collapse in the show’s latest Paramount+ special, and only one man is Karen enough to save it.

South Park: The Streaming Wars Part 2 finds the head of the Marsh household taking a long, hard look at what he’s become. And we’re not just referring to his Kate Gosselin haircut. Tired of always being the problem, Karen — sorry, make that Randy! — returns to his roots as a fluvial geologist and devises a plan to recycle de-salted seawater for public consumption.

And this plan couldn’t come at a better time, as Pi Pi has just launched his own streaming service, one that simply substitutes pee for water. It’s an objectively insane business model, but with stars like Matt Damon and Reese Witherspoon agreeing to promote it (while trying and failing to hold back their vomit), the public eats — or rather drinks — it right up.

Meanwhile, Cartman’s plan to sue his mom blows up faster than the breast implants upon which his lawsuit is based. To quote the judge directly, “You’re all a bunch of s–theads. Get out of my courtroom.” But Cartman and his enormous breasts aren’t done causing trouble, not by a long shot. Upon discovering that Cussler has been murdered — thus shattering his dream of landing a millionaire daddy — Cartman vows to prove that Tolkien has been sleeping with his mother. It’s an entirely baseless accusation, but since when has that stopped Cartman from doing literally anything? 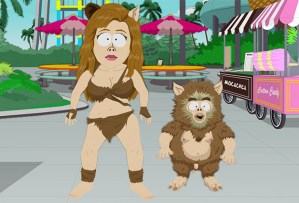 The boys then agree to investigate the mastermind behind the streaming wars, which leads them to the bowels of Pi Pi’s Splashtown. Here, they meet PigBearGirl and Chuck Chuck, the previously undiscovered wife and son of ManBearPig. Because if any character on this show needed their family tree expanded, it was ManBearPig.

Back at Tegridy Farm (what’s left of it, anyway), Sharon convinces Randy that he’s the only person capable of standing up to Pi Pi, but he’ll need to tap back into his inner Karen. He says it’s not possible without any weed, which turns out to be no problem at all, as Sharon still has a jar of his Thanksgiving Day special from three years ago. With his Karen powers fully restored a la Doctor Strange, Randy forces his way into Pi Pi’s Splashtown to confront his nemesis.

In the end, Tolkien is reunited with his father, ManBearPig beheads Pi Pi, and best of all, Cartman’s big ol’ boobies give Randy the inspiration he needs to save the town. With a little encouragement from Matt Damon, women from far and wide show up to have their breast implants de-salinated, ensuring that South Park will have enough water to last the summer. And that’s enough for now.

Your thoughts on South Park: The Streaming Wars Part 2? Grade the special below, then drop a comment with your full review.