David F. Sandberg addresses the long-running speculations that The Rock’s character will make an appearance in the ‘Shazam!’ sequel during an Instagram question and answer session.

AceShowbiz -Dwayne ‘The Rock‘ Johnson will not appear in “Shazam! Fury of the Gods“, David F. Sandberg has confirmed.

Fans have long been speculating that Johnson’s character Black Adam could make a cameo in the DC sequel movie, but the director has now confirmed it won’t be the case.

When asked, in Swedish, during an Instagram Q&A if the star will appear in the second “Shazam!” motion picture, he replied, “No, he has his own movie.” 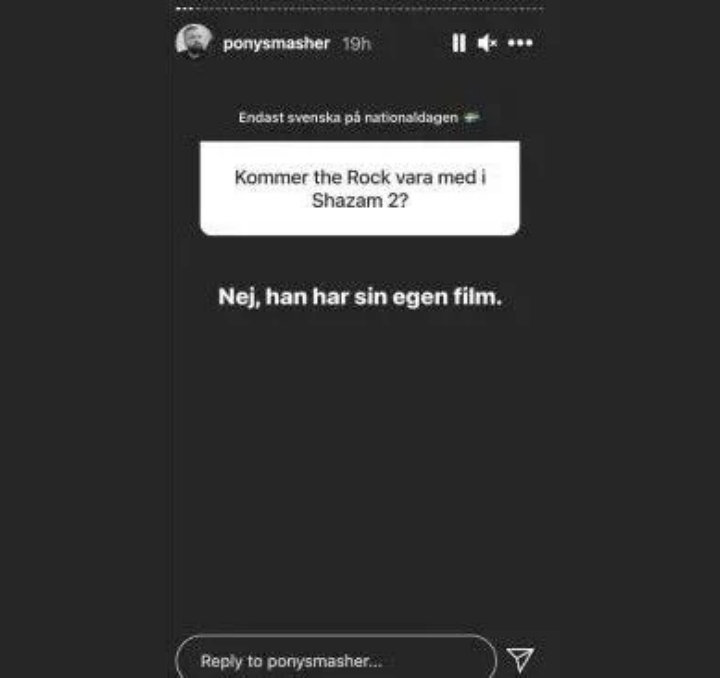 Last month (May 2021), Mark Strong – who played the villainous Dr. Sivana in the original 2019 film “Shazam!” – admitted he will not be reprising his role in the sequel.

He said, “You’re not going to see me in the sequel. Finally, I’m allowed to say it.

“I’ve had to sort of bite my tongue for so long, but I think they’re about to start filming in Atlanta and I’m very happy to give way to Helen Mirren and Lucy Liu, who I think are going to make a couple of fantastic villains.”

In April, it was revealed Liu had joined the movie as wicked demigod Kalypso, the sibling to Mirren’s character Hespera – the daughters of the god Atlas – and the pair are set to cause drama for Billy Batson (Asher Angel) and his grown-up superhero alter ego Shazam (Zachary Levi).

The sequel will continue the story of teenage Billy who, upon reciting the magic word “Shazam!”, is struck by the Living Lightning of the gods and transformed into Shazam.

Rachel Zegler was also confirmed to have joined the cast in an as-yet undisclosed role that will be key to the story.