Time to take another bite out of Shark Week.

Yes, that wonderful week of summer is back on Discovery with a lineup of new shows all about sharks, including the theme week’s first original movie.

“Capsized: Blood in the Water,” based on a true story, stars Josh Duhamel as the captain of a yacht that capsizes in a Florida storm as its crew is chased by sharks. But Duhamel says that even though it’s airing during Shark Week, it’s about more than just sharks.

“These people set out on what was a pretty ordinary trip, and it turned into a hellish nightmare,” he said. 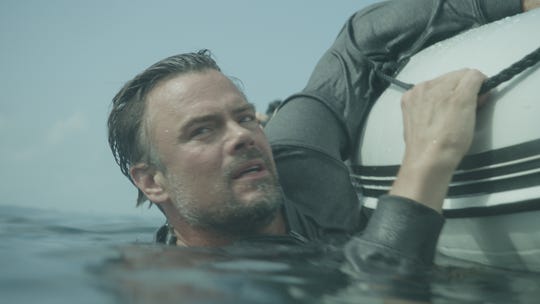 Speaking to a survivor of the attack, he says it was fascinating to hear how they  endured with no food or water and just a dinghy to help them.

For Discovery, it’s a change from the typical documentary-packed Shark Week, which is partially why Duhamel felt it was a challenge to take on.

“I think fans of Shark Week – and also fans of any movies based on true stories as harrowing as this one – will like it,” he says. “They’re going to be entertained by what these people had to go through, as heroic and tragic as it was.”

So maybe it’s better to keep away from the water for Shark Week. If your couch is more appealing than the beach, here are some other highlights from this year’s shark-fest.

The special includes a scene in which Riggle, Wayans and Anderson get into a “human bait box,” a plastic floating box,while sharks swim around them. Anderson even livestreamed the moment, which doesn’t seem like the smartest idea.

Riggle, who hosts ABC’s “Holey Moley,” emcees “Shark After Dark,” a half-hour talk show that airs Sunday to Thursday (11 EDT/PDT). The show features celebrity guests and shark experts to recap each night and tease what to expect next during Shark Week. 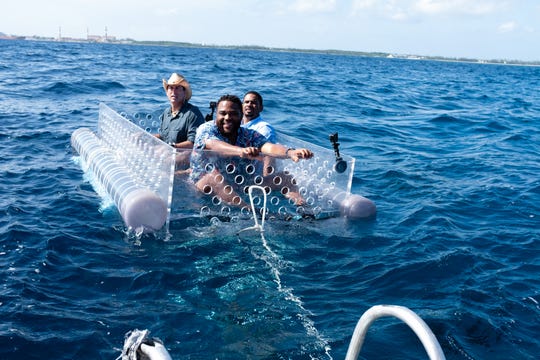 “Expedition Unknown: Megalodon” (July 28, 8 EDT/PDT): The Megalodon was the ultimate sea predator,  five times bigger than a Tyrannosaurus Rex. So what happened to it? Scientists use fossilized teeth, the only evidence of the Megalodon’s existence, to piece together what led it to extinction.

“Sharks of the Badlands” (July 29, 8 EDT/PDT): The number of white sharks around Cape Cod, Massachusetts, is growing, and scientists want to know why. They also hope to develop new shark-detecting technology that could alert beach-goers when the water isn’t safe.

ALL THE MOMS:‘Shark Week’ toys your kids will obsess over

“Sharkwrecked: Crash Landing” (July 30, 8 EDT/PDT): Hosts Paul de Gelder and James Glancy jump out of a plane to learn firsthand what they’d need to do to survive a wreck in shark-infested waters. The special was filmed on Palau, islands in the Pacific Ocean known for sharks.

“Great White Kill Zone: Guadalupe” (Aug. 1, 9 EDT/PDT): How does a great white shark stalk its prey? A team of experts heads to a small island off the coast of Baja California to watch great whites hunt seals and learn what makes them such deadly predators.

“Isle of Jaws: Blood Brothers” (Aug. 2, 8 EDT/PDT): A team of explorers heads to the Isle of Jaws, off the Australian coast, to observe two great white sharks as they hunt for prey.