'Seinfeld': There's a Simple Explanation Why Jerry and Elaine Don't End Up Together

Seinfeld wasn’t made to be a feel-good show. Creators Larry David and Jerry Seinfeld intentionally tried to do something different with the hit comedy, which meant turning television conventions on their head. Their efforts resulted in a show that wasn’t like anything else on the air.

But every TV show needs a romance, right? For Seinfeld, it wasn’t so simple. Fans learn early on in the series that Jerry and Elaine, two of the main characters, used to date but broke up and stayed friends. Most people assumed they’d start dating again or even get married by the finale. But that’s not what happened. 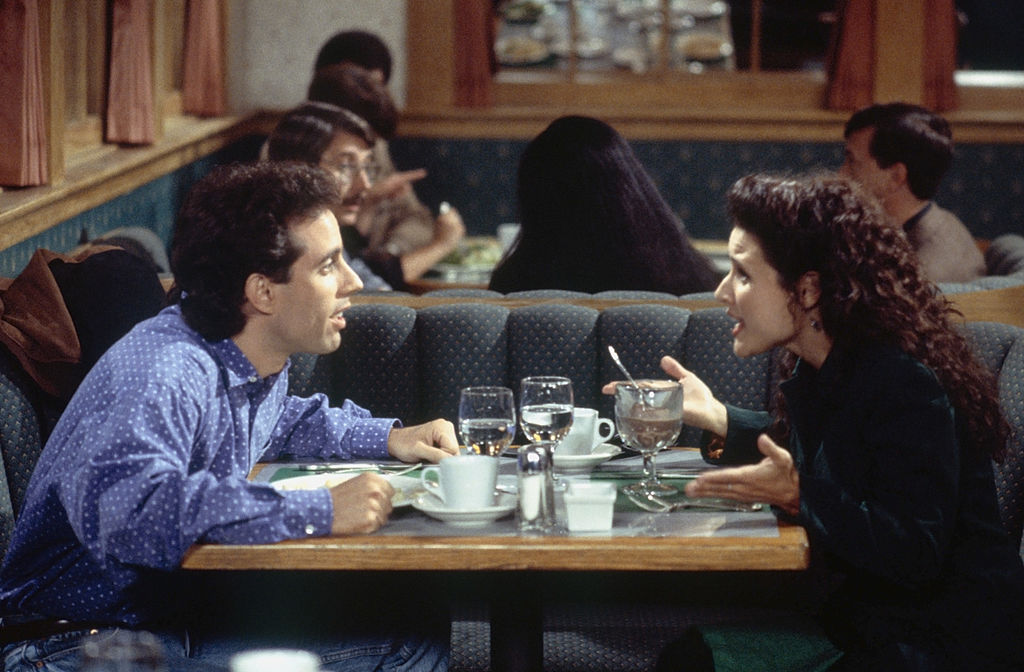 RELATED: The Worst ‘Seinfeld’ Episode Was So Cringeworthy NBC Had to Apologize

Jerry and Elaine have a surprisingly great relationship

Staying friends with an ex in the real world can be complicated. But Jerry and Elaine on Seinfeld make it look easy. They enjoy the joking, close relationship between two friends who know all of each other’s most intimate secrets. And somehow, that banter isn’t interrupted by awkwardness.

But there were a few moments when Jerry and Elaine were forced to confront their previous coupling and even a brief time when they gave love another shot.

Nobody wants to find out that their significant other isless than satisfied during intimate moments. In “The Mango,” Elaine confessesthat she sometimes faked orgasms while she was dating Jerry. He’s horrified byher admission and insists that he’d like to make it up for her. Unfortunately,Jerry experiences erectile dysfunction during their encounter, Screen Rantreported.

And that’s not the only time Jerry and Elaine explore a sexualrelationship again. In “The Deal,” Elaine reveals that she and Jerry had sex atotal of 37 times while they were dating and during the episode, the pair hassex three more times.

‘Seinfeld’ wasn’t meant to be neat and tidy

Trying to avoid germs during the quarantine.

The sitcom Seinfeld didn’t follow any rules exceptfor the one David set forth from the beginning: “nohugging, no learning.” He never wanted the show to become a vehicle for moralinstruction or a feel-good show like so many others. That’s exactly why itmakes sense that Jerry and Elaine don’t get together in the end.

In the controversial series finale, Jerry and Elaine almost confess their love to each other when they think they’re dying in a plane crash. At that moment, Elaine says there’s something she wants Jerry to know and he replies that there’s something he wants her to know, too.

“Jerry I’ve always…” she starts to say before the plane rights itself. With that, the moment is lost.

Many fans hated the ‘Seinfeld’ finale

Jerry, Elaine, George, and Kramer all prove that they learned nothing over the tenure of the show when they go to court for failing to help a carjacking victim. The foursome is still joking around even as they’re sent to jail.

Fans hated the storyline and the writers got plenty of criticism for the cynical nature of the ending. But for true Seinfeld fans, the show’s conclusion made way more sense than Jerry and Elaine tying the knot in some sappy ceremony. It wouldn’t have made any sense.