Scream was a game-changer. The horror movie sensation slashed its way into the hearts of an entire generation of fans sick to death of uninspired b-movie schlock. But what was it like behind the scenes? In a new interview, original stars Matthew Lillard and Skeet Ulrich look back 25 years later.

The original ‘Scream’ featured a cast of up-and-coming actors 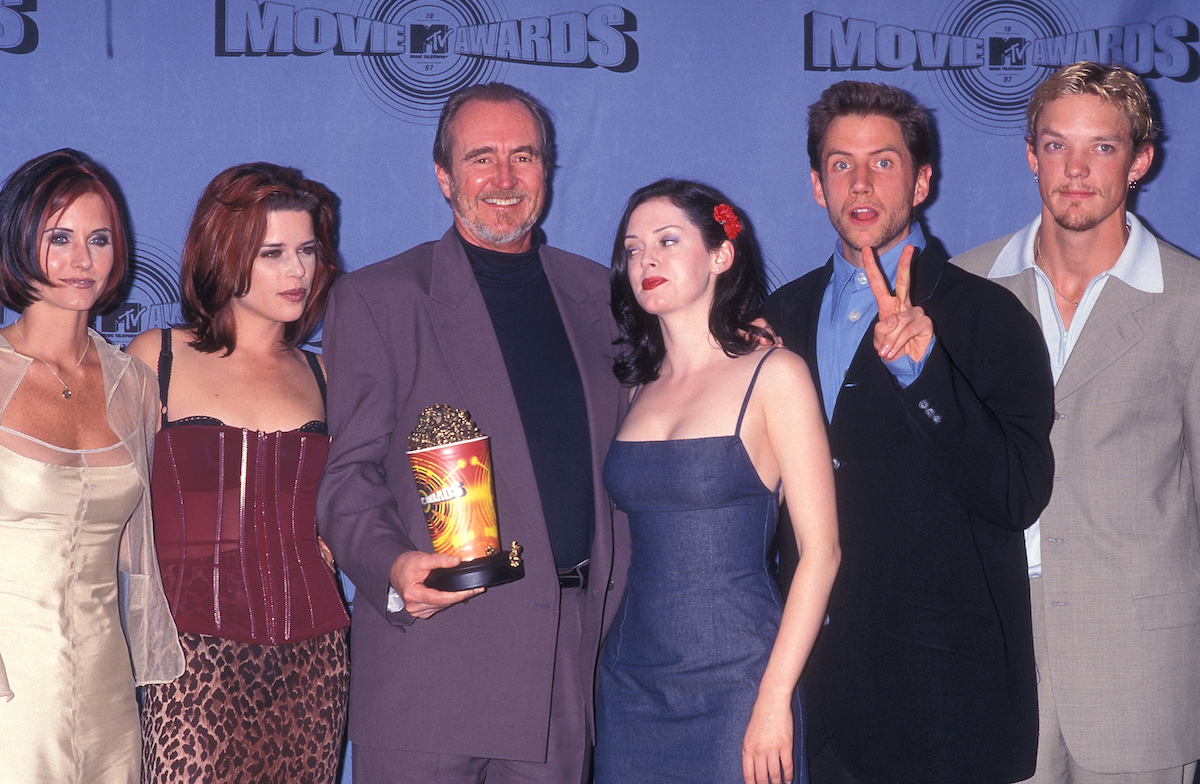 Director Wes Craven had a formula for success. And it started with a heavy serving of fresh talent.

To the dark comedy/bloody horror scream fest, Craven brought Drew Barrymore, Jamie Kennedy, Rose McGowan, and Matthew Lillard. Together, they would fight off the murderous slasher “Ghostface” — an iconic new masked killer in the same vein as Leatherface of The Texas Chainsaw Massacre and Michael Myers of the Halloween movies.

Additionally, Neve Campbell, David Arquette, and Courteney Cox appeared in the movie. Those three would go on to star in a series of sequels.

Craven introduced a horror screenplay that was as fresh as the movie’s talent. Sharply funny, full of sendups on ‘70s and ‘80s horror tropes, and really scary, Scream was the blast of terror Gen-Xers and millennials were waiting for. Additionally, it reviewed well — something horror movies often struggle to achieve.

Moreover, it hit the pop-culture spot at the perfect time. According to Variety, the budget was a mere $14 million. It has grossed upwards of $173 million globally since its late 1996 release.

With all that hoopla comes inevitable sequels. The now-classic horror movie spawned four follow-ups, including Scream 2 (1997), Scream 3 (2000), and Scream 4 (2011). As the original film approaches its 25th anniversary, yet another sequel threatens to hit screens. Scream (named the same as the first movie in the series, in the same vein as 2018’s Halloween) has a release date of January 14, 2022.

In a 25th anniversary interview with Variety, original star Matthew Lillard, who played Stuart, said that one of his favorite memories of famed director Wes Craven was a celebration dinner.

“Soon after the movie came out, we had a celebratory dinner at his house,” Lillard told Variety. “He was one of those people who was great at telling stories.”

“Because we were all so young and we went into that movie relatively naive in our careers, there was something very paternal about him,” Lillard continued. “He was definitely a father figure to a lot of us. He loved us so much. I think the original cast represented this rebirth for his career, and he was super proud of it. He was certainly a father figure to me in this business, without a doubt.”

On the topic of 25 years (!) Skeet Ulrich and Lillard couldn’t seem to wrap their minds around the anniversary. When Variety asked if they thought they’d still be discussing it so many years later, Ulrich quipped, “No, I couldn’t even think two years in advance, let alone 25 years in advance.”

Lillard didn’t hold back on his feelings about the experience. “It holds an emotional place for all of us because we were so young and had an incredible experience shooting the movie,” he said. “Going into it, none of us had any idea, right?”

To sum up, while Skeet Ulrich and Matthew Lillard aren’t returning for the sequel, they played a big part in making it the enduring cult classic it is today.