Reginald Hudlin wasn’t familiar with the story of Ray Ray McElrathbey when Disney came calling. But after reading the script for Safety, the director behind such films as The Black Godfather and Marshall was “knocked out” by what the young man had overcome. Now, Disney+ is ready to officially introduce everyone to Ray Ray.

Safety is inspired by the true story of freshman football player Ray (played onscreen by Jay Reeves), who stepped in to care for his 11-year-old brother, Fahmarr (newcomer Thaddeus J. Mixson), while navigating classes and practice at Clemson University. Corinne Foxx co-stars.

That the trailer arrives now, following Clemson’s upset over Notre Dame last weekend, is a much-needed win for the Tigers. “They deserve it,” Hudlin tells ET. “Any given Sunday you can win or lose, but you have to applaud the excellence of their program.”

Watch the trailer and read on for ET’s chat with the director about getting to know the real Ray Ray, casting Jamie Foxx’s daughter in her biggest role yet, and the challenges of filming in a stadium full of Clemson fans.

Tell me about your first time meeting Ray Ray.

It was really exciting, because here’s this guy who’s done all this stuff and he’s still a very young man. He was just as you would imagine, he was a nice guy and grounded and charming and smart. And I thought, “Well, this is great. I’m more than happy to tell his story and make sure he gets all his roses.”

And it seems like he worked closely with you on the film. What did it mean to you and the actors to have him there on set, seemingly every step of the way?

It was great. We all really appreciated having him there as a resource. He worked out with the actors, he hung out with the actors, and they loved it. We’re all still connected. It’s a story that if it was fictional, you’d go, “Oh, this is ridiculous! It’s over the top.” [Laughs] We knew that being true to the spirit of his story was important, so we were grateful to have him there to make sure that we’re telling it right.

What was the process of finding and casting Jay? And once you saw him, how did you know he was right to play Ray Ray?

It was tough. We’d have actors who’d come in, who read, and then we’d take them out to the field and have them catch and throw and run. We didn’t want some Hollywood movie where folks weren’t really athletic. We wanted the real thing. So, it was great to work with actors who were completely capable and totally understood the experience. And with the character of Ray, to find a guy who embodied all the qualities of the real Ray were really tough, but Jay Reeves was extraordinary. He was so charming, such a good guy, can handle a tough scene with the greatest of ease and it was just an absolute pleasure working with him every day.

You also have Corinne Foxx, who’s still relatively new to acting. What was it like working with her?

Well, it’s funny because I’ve done three movies with her dad. I’ve known her since she was a teenager hanging out on set with her father. So when they said, “Oh yeah, she’s acting now,” I went, “Great! Let’s bring her in.” It’s very funny, because she loves her father but she’s very much her own person and wants to do things on her own and was like, “Oh god, Dad, please don’t come visit me.” I was like, “Why?! I love your father!” She goes, “Please!” [Laughs] But she’s a wonderful actress, she’s a wonderful person, just a joy to work with every day, so it was a great experience.

So, did the Jamie visit come to pass or did she keep him away?

Well, you know, he’s busy making so many movies, he wasn’t able to. But we talked on the phone a few times and he’s just wonderful. He’s just really one of the best people in our industry. 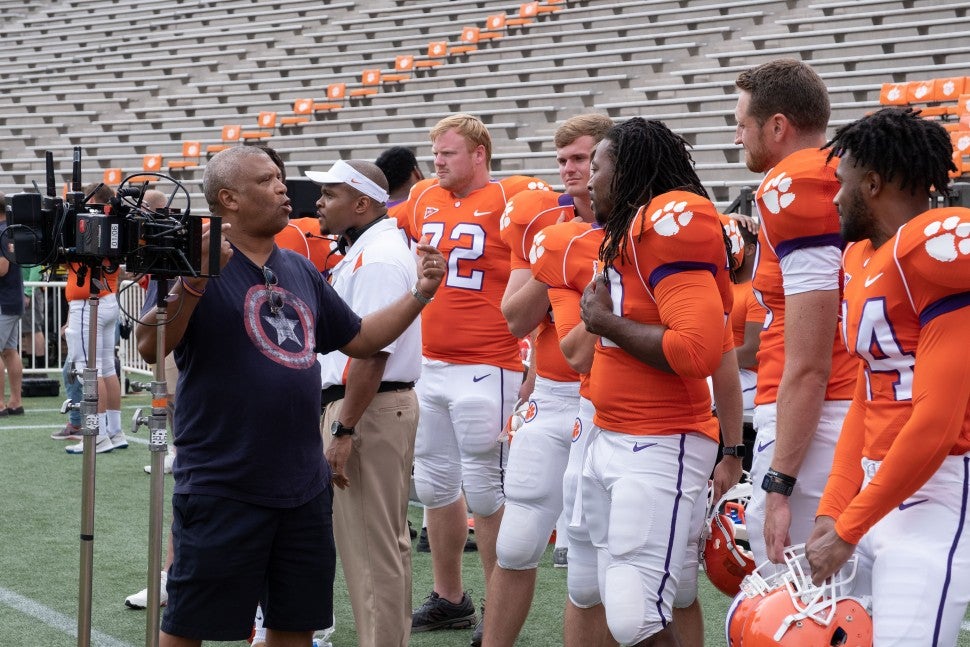 You filmed during the halftime of an actual Clemson game. What was that experience like? Does that make it more stressful, having all those people watching you work? Or are you able to feed off the energy?

Both. It was very tough, because even though the University of Clemson and the Clemson team were incredibly helpful and supportive of the film, when it came to an actual game, they were like, “Look here, you’re not going to do anything to mess up a game. You’ve got 10 minutes, and that’s it!” [Laughs] So, we had three different sequences we needed to shoot in that 10 minutes, and that’s a lot. Other films, they shoot maybe one play in the course of a halftime. We had to shoot three plays with no time for any do overs or anything. We told the crowd that we’re filming and, “We know it’s Hollywood, it’s not a real game, but if you could cheer like it was a real game.” And once we started filming, they were cheering so loud that literally every hair on my body stood on end. In fact, they recorded it and said it’s the third loudest time ever in the history of the stadium. We knew that communication was going to be a challenge, but with the crowd this loud, there was no way walkie talkies were going to work, that phones were going to work. But we had prepared, so we had flags. We went all the way back to the 18th century and we were literally waving flags amongst our crew to move from sequence to sequence. And we got the whole thing shot in seven and a half minutes. Well under our 10-minute deadline.

And then on top of that, the president of the studio said, “Hey, I’m going to come down and watch you guys shoot the game.” We’re like, “Of course, and the boss is watching!” And it was during our first week of filming! So, it couldn’t be a more high-pressure environment. We were still getting our collective act together, the boss is watching, he’s enthusiastic, we’ve got the do-or-die timeline, and we’ve got a lot of very tough sports plays to shoot, but we nailed it. It actually empowered all of that for the rest of the shoot. Because we said, “If we could do that, we can do anything.” It was a huge morale boost for the entire cast and crew.

Have you had the chance to show the movie to Ray Ray and Fahmarr yet?

Ray calls and he goes, “Well, I think we need a miniseries.” [Laughs] That was his way of going, I loved it and I want more. I was so relieved, because he’s such a wonderful man, such a lovely person and I really want to do right by his story. And when his response was, “I loved it,” it was just a huge, huge relief. 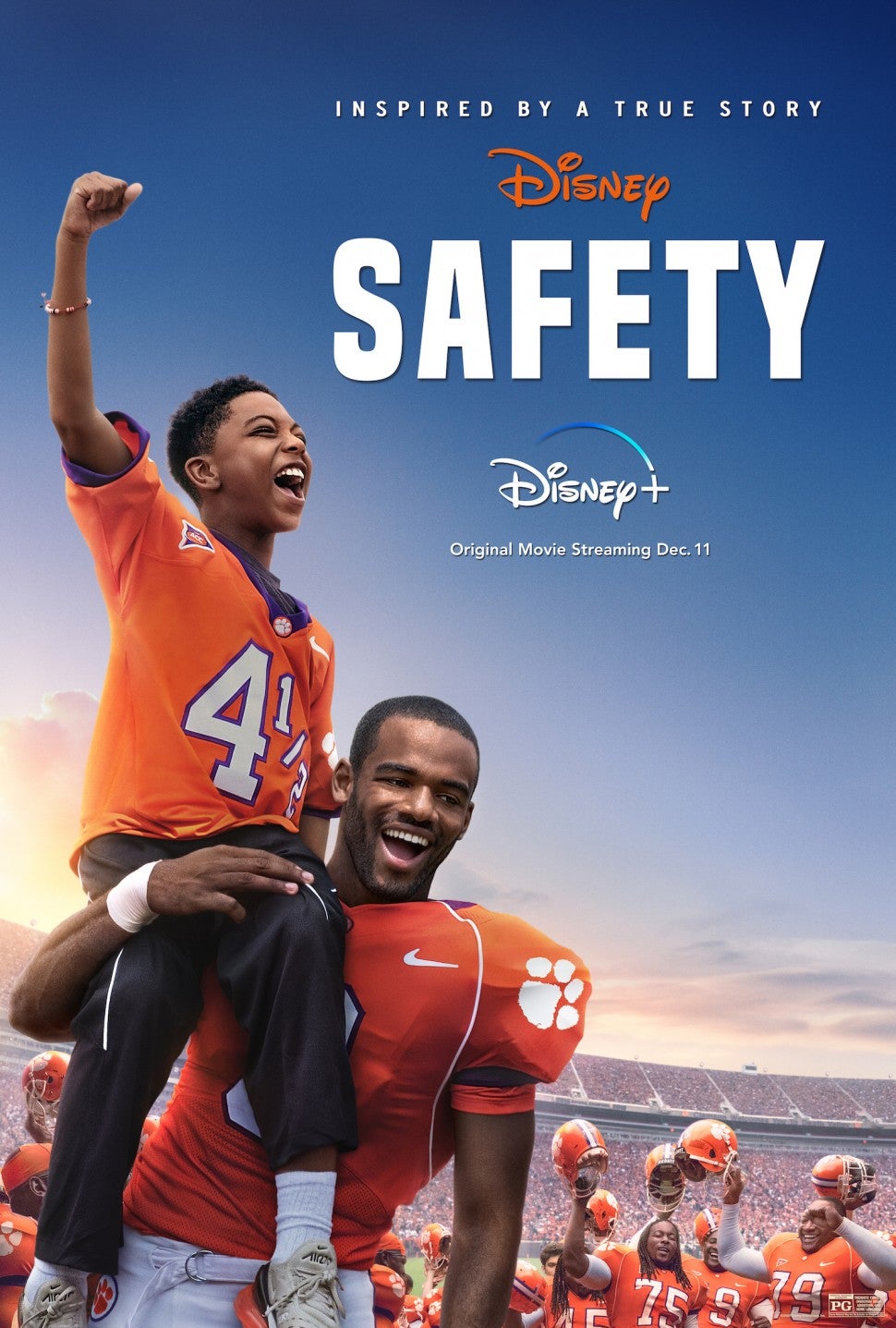 Safety is streaming on Dec. 11 on Disney+.