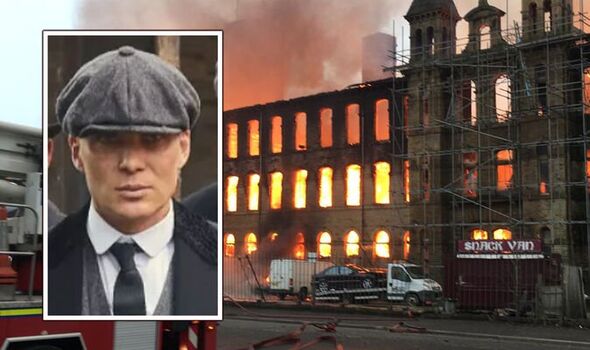 As Peaky Blinders season six hits the BBC this month, those in Yorkshire will likely spot a few familiar locations. The BBC series filmed in and around Keighley for the final season, using locations including the Keighley & Worth Valley Railway and the town’s Dalton Mills. Videos and images coming from Keighley on Thursday show Dalton Mills has gone up in flames.

One video posted by @OptimumFireworks shows fire engines at the scene of the blaze as smoke billows above the building.

A cordon has been put up around the building as firemen get to work on tackling the fire.

Alongside the video was the caption: “Dalton Mills in Keighley up in flames currently.”

Many other videos have popped up on Twitter with user @R4Shearer noting it is a “great loss” to the filming location.

“Another Mill fire what a great loss. Dalton Mills Keighley,” they posted.

Dalton Mills is just one of the locations in Yorkshire used for the sixth season of Peaky Blinders, which follows Tommy Shelby (played by Cillian Murphy) and his family.

The series has been partly filmed in Keighley for over seven years with production on the final episodes resuming in early 2021 following the coronavirus pandemic.