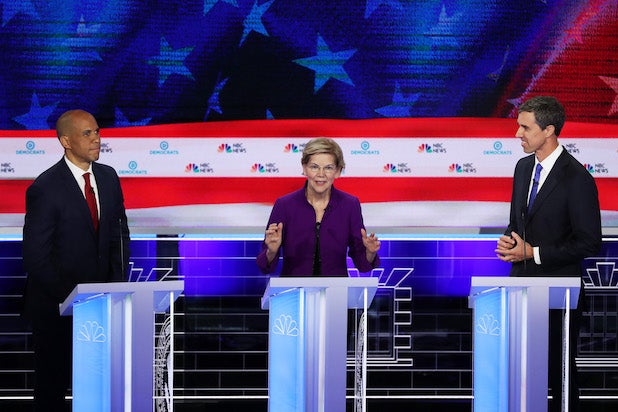 The first Democratic debate for the 2020 U.S. presidential election drew 15.3 million TV viewers across NBC, MSNBC and Telemundo. Another 9 million checked out the live stream.

That’s much lower (-36%, to be more exact) than the kickoff to the 2016 election cycle, which of course had the Donald Trump factor. However, it did fare better than the debates leading up to the 2008 and 2012 presidential elections.

Wednesday’s debate was easily the most-watched program on television of the night. In the key news demo of adults 25-54, the debate averaged 4.3 million viewers across all three networks. Among adults under 50, the number was 3.7 million.

On Thursday, 10 other Democratic hopefuls, including former Vice President Joe Biden, Sens. Bernie Sanders and Kamala Harris and Mayor Pete Buttigieg, will take the stage for the second night of the debate.