Naga Munchetty and Jon Kay were going through the morning’s papers highlighting stories which had caught their attention. One story was about James Ross who had lost his wedding ring but it was thankfully found in a tip in North Shields. Commenting on the story, Jon accidentally confused James’ wife with his own leaving Naga giggling.

“The BBC News website has a story about a man whose wedding ring fell into a pile of rubbish in a 10ft container at a tip,” Naga began.

“Fortunately for James Ross, it was found, unsurprisingly, caked in grime. I think that’s a nice way of putting it, who knows what it was caked in.

“[It was found] by staff at the tip after they sifted threw mounds of rubbish to find it. That’s going to be one very grateful man.” 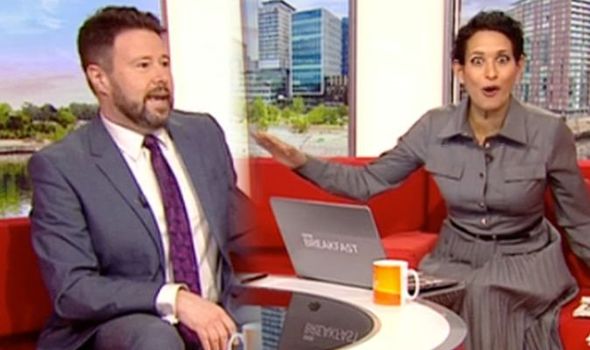 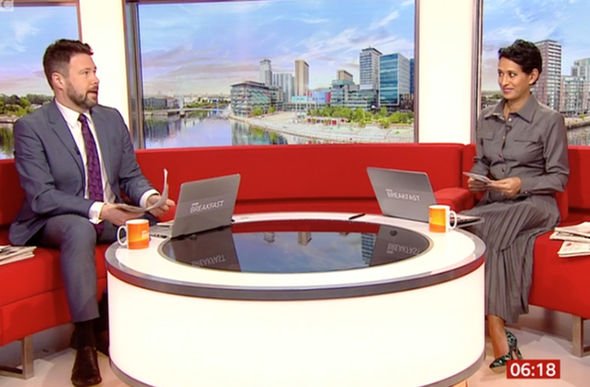 “Apparently James told the BBC that he was dreading, because of it was Valentine’s Day, he was dreading going back home and saying to my wife, ‘Not only have I…,” he continued before trailing off.

Jon quickly corrected himself: “Not my wife, his wife and telling her…”

“This is going down a whole different avenue isn’t it,” Naga laughed.

Her co-host continued: “Let’s move on, let’s look inside, they thought it was a washer they had found at the bottom of the skip but it was the ring inscribed.” 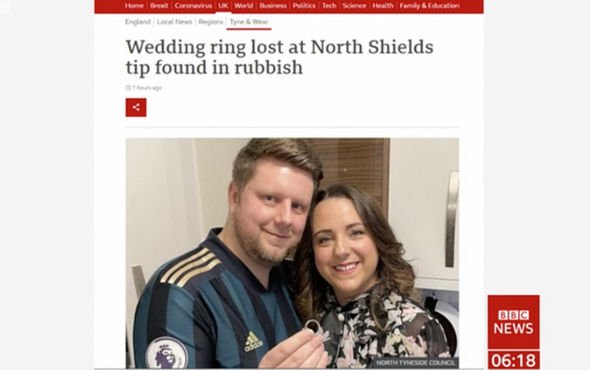 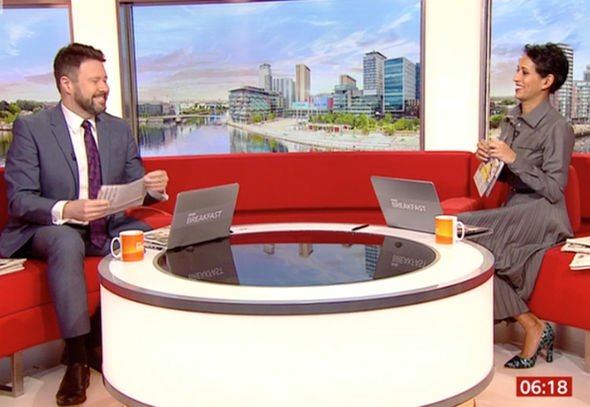 Naga cringed at her co-star’s blunder as Jon tried to move on to more stories from inside the newspapers.

“Let’s look inside,” he insisted before begging: “Naga, help me!”

“Help you? No I just thought I’d let you keep digging,” Naga laughed.

It came after James told BBC News of the incident: “It was a container where you push the rubbish through an opening.

“My hands were cold and, as I was shaking out the box, suddenly the ring was just gone.

“I don’t know if it caught the edge of the box, but my heart just sank.”

James quickly alerted staff about the incident with four workers helping to search for the ring on Sunday.

“I was losing hope and dreaded the thought of going home to my wife on Valentine’s Day and telling her my ring was lost,” he continued.

“It wasn’t what it cost – it was laser engraved with my wife’s handwriting and the date we got married in 2009. It was irreplaceable.”

The staff at the tip pulled out all of the rubbish before sifting through it in order to find the ring.

Thankfully James was reunited with his wedding ring and didn’t have to face an awkward conversation with his wife.

BBC Breakfast airs daily on BBC One at 6am.