Loose Women panelist Carol McGiffin has asserted that she would refuse to take a Covid test if asked by friends or family at Christmas time, with viewers expressing how ‘disgusted’ they are by her statement.

This week, the UK recorded the highest number of new daily cases of Covid-19 since the pandemic began, logging more than 78,000, amid the spread of the Omicron variant.

While Prime Minister Boris Johnson did not announce new restrictions during yesterday’s press conference, he did urge members of the public to ‘think carefully’ before going to events during the festive period.

On Thursday’s edition of Loose Women, the panel discussed their views on inviting people into their homes around Christmas time, with Strictly Come Dancing 2021 contestant Judi Love saying that in order to protect the mental and physical health of her and her family, she would be asking everyone to do a test if they came into her household.

‘If it is someone, a friend, who I know is out there doing whatever they want and has never stuck down to the rules, then you won’t be coming to my house unless you’re going to have a test,’ she said. 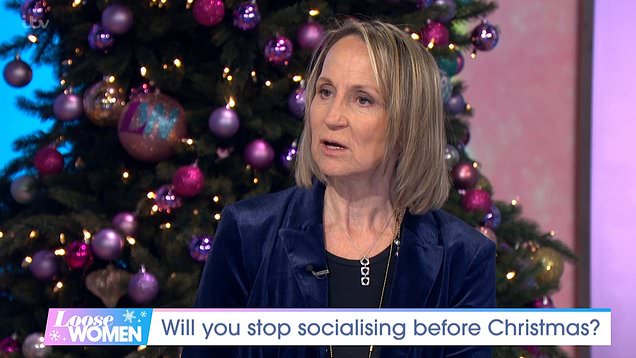 Kaye turned to Carol, acknowledging that if she were to ask her to take a test before coming to her house, ‘because of your views that you’ve expressed, you wouldn’t want to do that’.

She continued, stating: ‘Well I respect that you don’t trust me to come to your house even though I’m not ill without having to prove that I’m not ill, you know, where does it end?

‘What other illnesses do you want to know that I’ve got or haven’t got? I find it quite breathtaking actually that Boris stands there and goes, “We’re not cancelling anything, but here’s a load of scary numbers,” and everyone goes and cancels everything anyway.’

‘I object to being labelled as soft, Carol. I have 30+ years in the emergency services and respect the opinion of others to make their own decisions but your scathing name calling of those who choose an alternative option is outrageous and deserves an apology,’ another wrote.

Another angry viewer said: ‘I can’t believe Carol wouldn’t be willing to take a test before going to see someone. You can have COVID-19 with no symptoms and pass it on to someone who it does cause a serious issue. Saying she will be going out nightly only shows how little she cares about others.’

‘Honestly can not believe Carol McGiifin on #LooseWomen today. Im actually disgusted!!’ someone else stated.