“The line must be drawn he-uh!”

Twenty-five years after Patrick Stewart’s Jean-Luc Picard most emphatically said those words, that moment from the film “Star Trek: First Contact” has become a full-on meme. Multiple clips of it on YouTube have hundreds of thousands of views each. It’s become one of the defining moments for the character. It also means a lot to its director.

“That still holds up as one of my favorite things I’ve ever, ever been involved in as a director,” Jonathan Frakes said.

Frakes, known to fans as Picard’s “Number One,” Commander Riker, has had a very successful career as an actor — and undoubtedly that’s what keeps the fans coming to meet him at “Star Trek” conventions. But he’s had as prolific a career behind the camera, as director of “First Contact” and the follow-up film “Star Trek: Insurrection,” and all over the place as a TV director, from “Leverage” and “NCIS: Los Angeles” to “Falling Skies” and “The Orville.”

Most uniquely, he’s now been involved in directing TV episodes of “Star Trek” across nearly 30 years. With the explosion of Paramount+ “Trek” series masterminded by Alex Kurtzman, all with different creative teams than were steering the “Trek” shows Frakes appeared on, such as “The Next Generation,” he’s one bit of connective tissue that ties these disparate eras together. He’s directed the latest episode of “Star Trek: Discovery,” titled “Stormy Weather,” and his character- and actor-centric approach for this installment is immediately apparent. 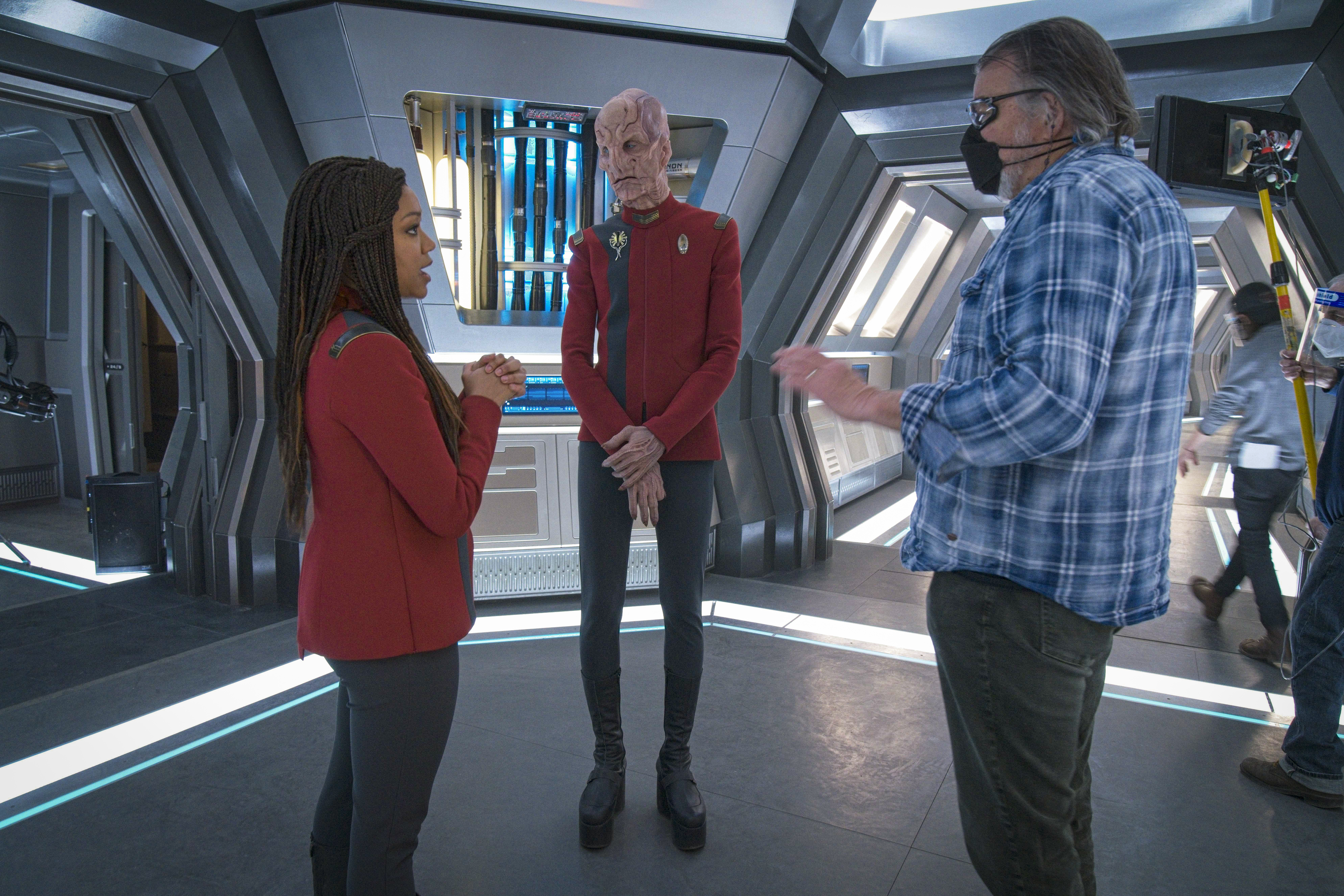 Frakes has become known as “Two-Takes Frakes” for his efficient directing style.

The ship’s computer, Zora, has recently become sentient, a disembodied AI much like in Spike Jonze’s film “Her.” British actress Annabelle Wallis voices Zora, but she records her lines after the on-set production in Toronto occurs. So Frakes had to get creative and instruct the young actor Ian Alexander, who plays the character Gray, to interact with something that wasn’t there — perform a monologue as if it was a dialogue. Alexander’s resulting performance is really expressive, a triumph of imagination that feels worthy of Jonze’s film.

Frakes is 69 and has been involved with “Star Trek” since “The Next Generation” debuted in 1987, and Alexander is 20 years old and a pathbreaker for representation on the franchise as its first transgender actor. That such a striking scene resulted from this collaboration is what can happen when a veteran with decades of institutional knowledge helps, er, the next generation be best positioned for success.

“Ian really gets it, in terms of his onset demeanor and the additional responsibility that both he and Blu [del Barrio] have taken on to represent the community in a way,” Frakes said. They’re paired, if you will, with a couple of incredible gay icons in Anthony [Rapp] and Wilson [Cruz]. And they’ve embraced their position in the community in such a profound way. And Blu and Ian have been essentially thrust into it, and I think have handled themselves with real profound grace.”

Alexander is the future of “Trek,” but the actors Frakes has directed on various episodes have connections going all the way back to 1940s classics. On “The Next Generation” he helmed installments featuring the actors Norman Lloyd and Jean Simmons (who lobbied to be on the show, because she was such a fan and watched each new episode with a circle of her friends). And a reverence for the groundbreaking artistry of the past informs Frakes’ work. 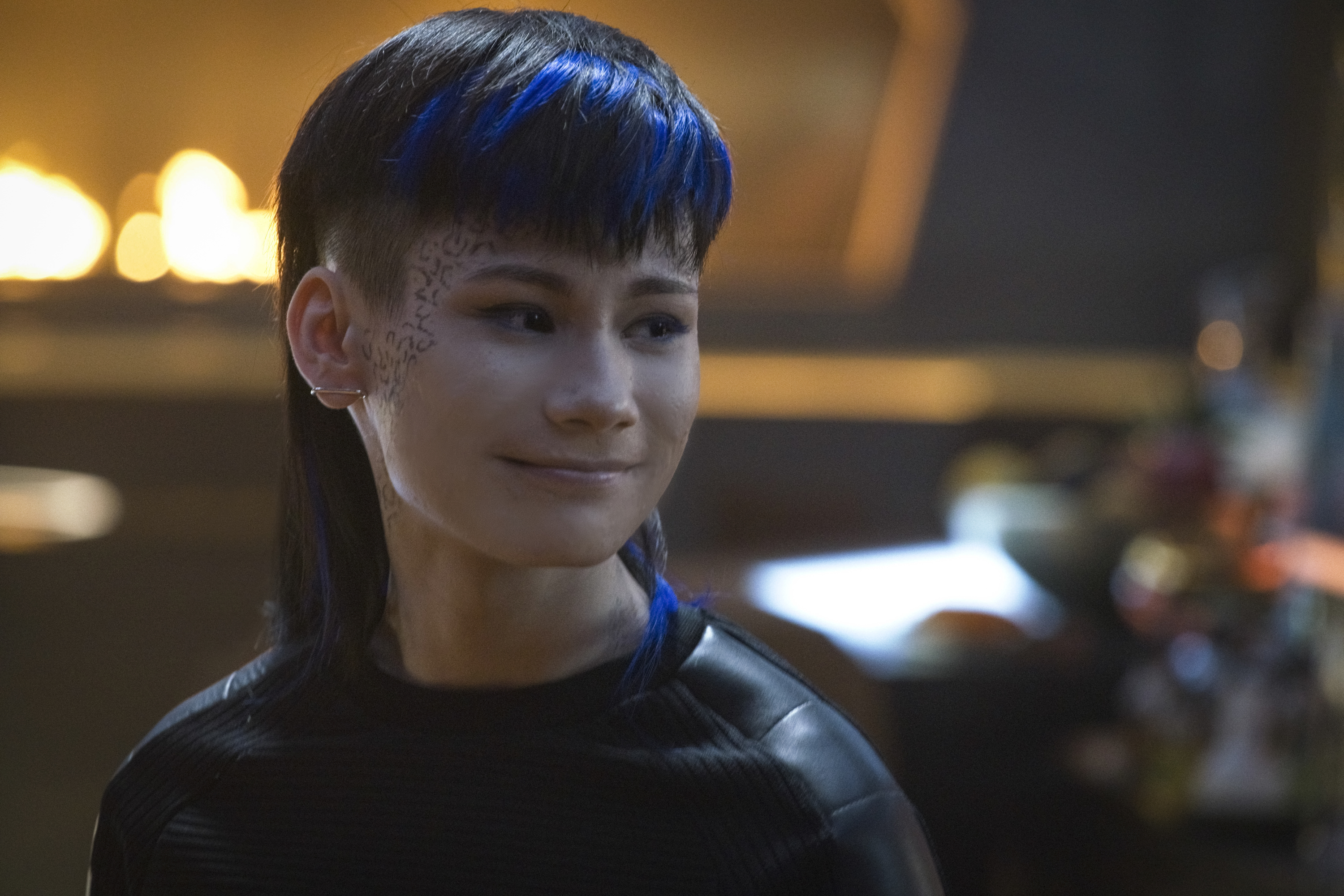 At the end of the “Stormy Weather” episode, the AI Zora (voiced on set by a Canadian stand-in in this scene and some others, before being replaced by Wallis) comforts Capt. Burnham (Sonequa Martin-Green) as she risks her life to fly the Discovery solo through a spatial anomaly. In the final version of the episode, Wallis sings “Stormy Weather,” and does a very good job of it. But the initial plan was to have the actual recording made famous by Lena Horne from the 1940s play in that moment. Kurtzman’s close creative partner Jenny Lumet, an executive producer on “Discovery” and writer of “Rachel Getting Married,” is the granddaughter of Horne.

“It was the perfect song choice,” Frakes said. “For the metaphors that run deep, the relationship between Burnham and Book (David Ajala), the trouble that the ship is in, this state of the Federation.” That’s typical of his ability to see connections across eras that might not be readily apparent — fans may remember the twirl across the 1940s ballroom in “First Contact” or the unexpected Gilbert and Sullivan duet in “Insurrection.” He loves Wallis’ version, though. “I think it may be better that it doesn’t take you out of it by having Horne singing it.”

Frakes, who’s already completed directing two episodes of the upcoming second season of “Star Trek: Picard” and is signed for two more for the third season after that, sure has a lot more tools at his disposal now than he did when directing “Trek” back in the ‘90s.

“We had all the toys!” Frakes said of that final “Stormy Weather” scene of Burnham steering the ship. “We had diopters, and a lipstick cam, and cranes, and practical fire, and VFX fire.” Thirty-five years after he first set foot on the bridge of the Enterprise-D, Frakes’ enthusiasm for “Star Trek” burns as bright as ever.

The “Stormy Weather” episode of “Star Trek: Discovery” is currently available on Paramount+. The show will stream its mid-season finale on December 30, before returning with new episodes February 10.