Four Hours at the Capitol Review: HBO Doc Is a Rote Re-Assembly of Footage, with Little Insight

It’s arguably too soon for “Four Hours at the Capitol,” though not because the January 6th insurrection is too taboo a topic. Rather, the 92-minute HBO documentary has little to say that hasn’t already been said over the last nine months, and little by way of factual or aesthetic detail that might illuminate new angles on the day’s harrowing events. There are a few intriguing exceptions, though these are not only fleeting, but also sandwiched between larger narrative slices that feel almost perspective-less in their approach to fresh wounds and extremely recent history.

A sense of stillness and normalcy permeates the introduction, as a police officer recounts the day’s unassuming start. However, given the film’s tight focus on a specific window of time — as evidenced by its title — things quickly go off the rails. Through a series of on-scene videos, and through first-hand interviews with officers, congresspeople, journalists, aides, and Proud Boys, director-producer-cinematographer Jamie Roberts strings together a coherent timeline of the way the storm unfolded — though for anyone unfamiliar with what a “Proud Boy” is, the film doesn’t bother explaining.

This lack of context ends up being a recurring problem. Roberts is so fixated on the four-hour period of the attack that the information provided by the talking heads ends up similarly blinkered: limited to “what” happened on January 6th, without any trace of “how” or “why.” The resultant narrative is literal and clunky, wherein the on-the-ground footage and the individual interviews serve the exact same function. When an interviewee mentions insurrectionists breaching a barricade, the film cuts to footage of said barricade being breached; likewise, a famous video of a window being broken is accompanied only by an interviewee recounting the breaking of that same window.

This doubled-down-on linear telling would perhaps not feel as rote, were it not for the few times the film manages to be genuinely insightful. A young staffer, for instance, provides a painful personal account of that day — the kind one wouldn’t be able to casually glean online, which is the case with much of the footage — though the film quickly cuts away from these silent and reflective moments to charge forward to the next thing. Similarly, the devastating personal fallout for several people is eventually touched upon, but their experiences are all crammed into the film’s final minutes like a hasty post-script, one of several floating ideas that makes the conceit feel trapped halfway between a claustrophobic account of the chaos in situ, and an exploration of its wider ripple effects. 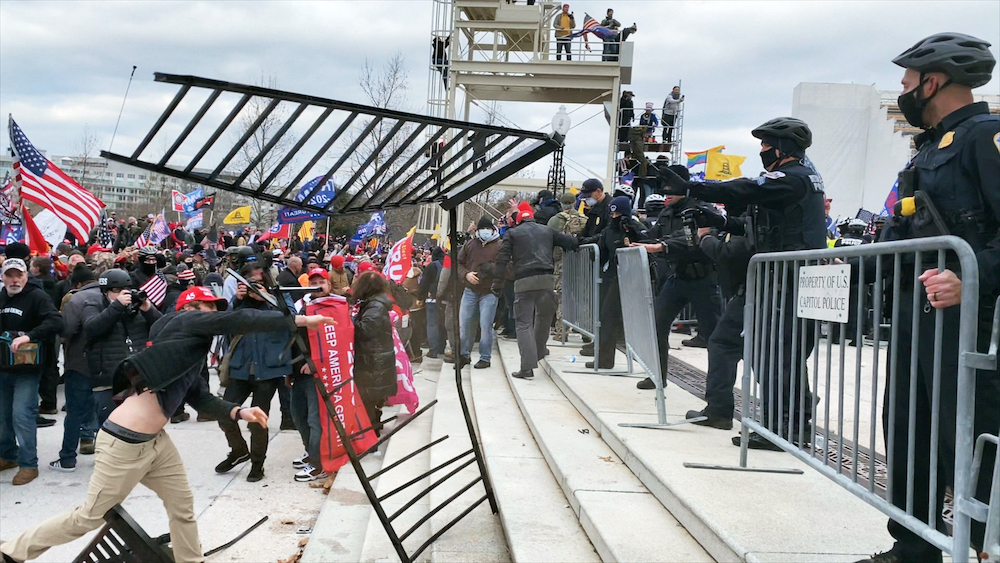 “Four Hours at the Capitol”

On rare occasions, the film’s aesthetic approach hints at a compelling underlying story beyond just a simple retelling. Initially, close-ups of several policemen who were harmed that day are filmed from an overhead vantage, as if to create a dynamic of powerlessness — a technique used recently in “Finding Neverland,” the HBO documentary about Michael Jackson’s accusers, which was directed by this film’s executive producer Dan Reed — but before long, the technique becomes indiscriminate to the point of randomness, as it’s applied regardless of the subject matter being discussed. When the march moves from President Trump’s rally toward the Capitol and threatens to turn violent, the edit may not build in intensity at all, but David Schweitzer’s score most certainly builds — not in tempo, but in heaviness and thoughtfulness, as if it were lamenting some inevitable fall from grace. However, this idea ends up limited to the music alone, as the film barely scratches the surface of who made up the angry mob and what led to their herd mentality.

Some subjects’ conspiratorial statements, like those about children being preyed upon en masse by a global cabal, aren’t contextualized in the slightest (let alone refuted), leaving on the table a vital opportunity to explore the true depths of the insurrection, and the head-spinning domino effect that led to it. For a political documentary — one filled to the brim with politically charged flags and insignia — it has surprisingly little interest in the actual politics of the event.

One can hardly refer to a collection of such potent footage as uninteresting, but its assembly here leaves much to be desired. Apart from one specific use of an officer’s body cam footage interspersed with recollections of war, the chosen clips all feel incredibly familiar. While this may sound like an obvious conclusion, given the highly publicized nature of January 6th, the film’s familiarity isn’t merely visual in nature — it contains mostly alternate angles of what’s been publicly available — but emotional in nature, too. It rarely uses existing footage to stir, excavate, terrify, or challenge, and it rarely re-frames the year’s most enormous and shocking media event in any way that doesn’t feel like scrolling through one’s Twitter feed months after the fact.

The memory of the day isn’t distant enough to demand such a standard retrospective, which seldom touches on the intimate and haunting experiences its subjects seem hesitant, though ultimately willing, to discuss. Instead, the film’s focus remains largely on the crowd — not the forces that pull and push at it, contort its shape, and determine its movement through space and history, but rather, the crowd as mere spectacle, divorced from all the things that paved its path to the Capitol.

“Four Hours at the Capitol” premieres Wednesday, October 20 at 9 p.m. ET on HBO.