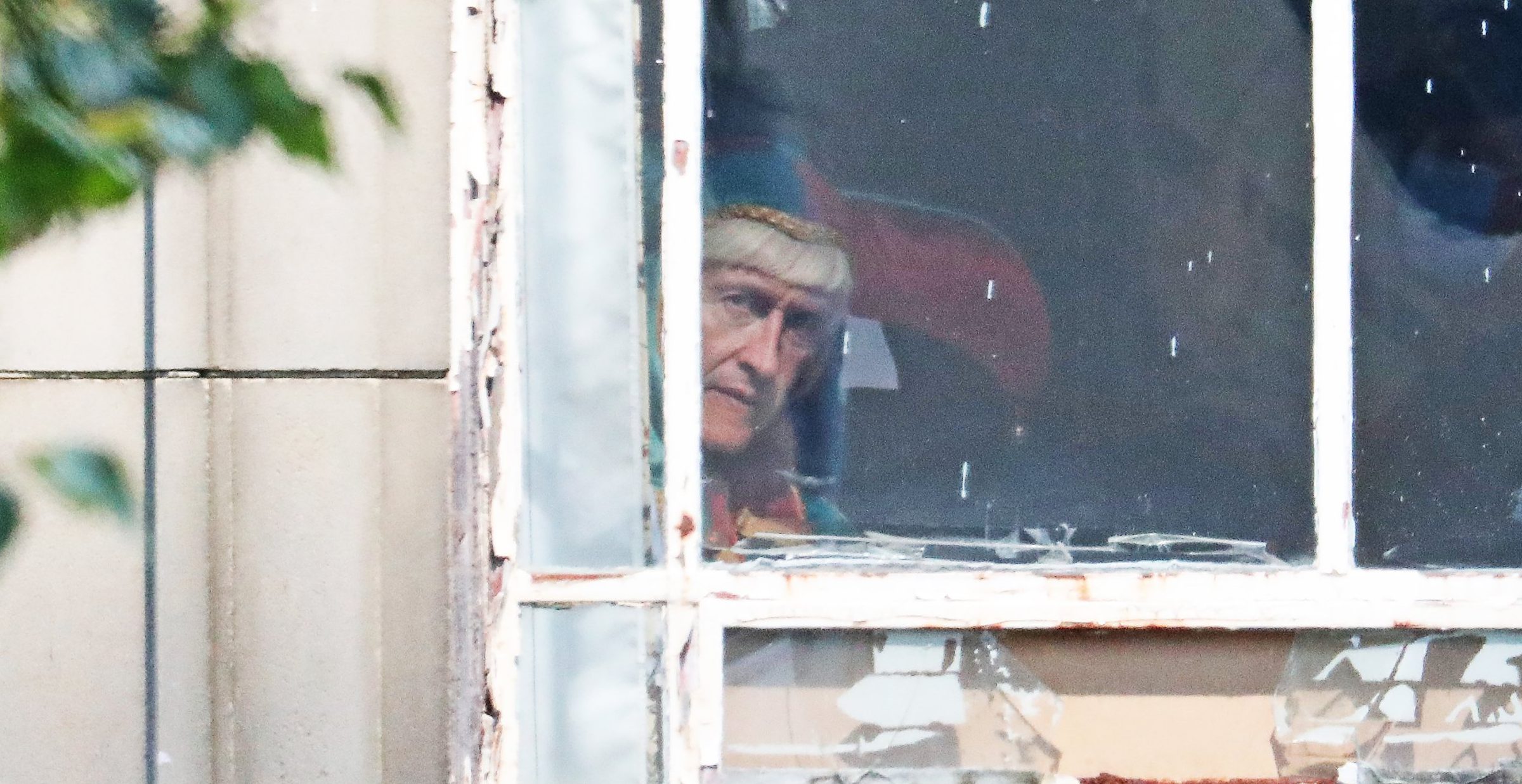 Steve Coogan has been pictured for the first time in character as Jimmy Savile, while filming the controversial drama The Reckoning.

The 55-year-old has been cast as the prolific sex offender in an upcoming BBC drama, which has already proved controversial before making it to air.

Last week, Coogan was seen arriving at set, and was hidden from sight by umbrellas as he emerged from his car.

Coogan was snapped through a window in a green and red velvet costume, with his fringe visible beneath the hat.

He was standing next to a nurse, signalling that hospital scenes are ongoing.

In the 1960s, Savile was a volunteer at Leeds General Infirmary and Stoke Mandeville Hospital.

Following his death in 2011, investigations found that the Top of the Pops host abused at least 33 patients aged between five and 75 in Leeds, and a further 63 people, between the ages eight and 40, connected to Stoke Mandeville.

Sexual abuse by Savile ranged from inappropriate touching to rape, including the rape of children under the age of 12.

The Stoke Mandeville report found that Savile had ‘virtually unrestricted access’ to clinical areas and patients during the 1970s and 80s.

Last week, extras on set in Bolton were pictured dressed as patients in pyjamas, and nurses in old-fashioned uniforms.

There has already been backlash to The Reckoning being made by the BBC, considering an inquiry into Savile’s crimes found that the corporation missed opportunities to stop ‘monstrous’ abuse by the DJ because of a ‘culture of fear’.

The BBC also kept a Newsnight documentary looking into the allegations against Savile off air, with ITV going public with their investigation a year later.

An inquiry into Savile after his death found he had molested at least 72 children, some as young as eight, over a four decade campaign of sexual abuse.

His first victim was in 1959 and his last in 2006, and the BBC report by Dame Janet Smith stated that his reign of abuse could be charted in ‘in the corridors, canteens, staircases and dressing rooms of every BBC premises’.

Coogan said that playing the disgraced former Jim’ll Fix It presenter was ‘not a decision I took lightly’, saying: ‘Neil McKay has written an intelligent script tackling sensitively an horrific story which – however harrowing – needs to be told.’

Neil McKay, who wrote the Bafta-winning drama Appropriate Adult, about serial killer Fred West, wrote The Reckoning, and both he and executive producer Jeff Pope also worked on Moorside, about the disappearance of Shannon Matthews, and the forthcoming drama Four Lives, about the murders of four young gay men by Stephen Port.

Pope said: ‘The purpose of this drama is to explore how Savile’s offending went unchecked for so long, and in shining a light on this, to ensure such crimes never happen again. Steve Coogan has a unique ability to inhabit complex characters and will approach this role with the greatest care and integrity.’