Emmerdale star Nicola Wheeler has teased she hopes her character doesn’t die ahead of the soap’s upcoming 50th anniversary, which would give her a chance to show the character’s more comic side, after some darker storylines.

Emmerdale is set to celebrate 50 years on our screens this October, and we can only expect massive storylines and of course some pretty epic stunts.

In recent episodes, Nicola’s character Nicola King has been struggling after she was set upon and attacked by a group of teenage girls.

The councillor was brutally attacked in a carpark, leading her to suffer from agoraphobia as well as monophobia.

Speaking on This Morning with Phillip Schofield and Holly Willoughby, Nicola revealed that despite her character suffering some dark storylines there are parts of her character she does love, including her comic side.

She said: ‘The things I love about Nicola are, you know, you get away with being vile to your friends and they’re still your friends at the end of the day.’

‘There’s a sense of humor that comes with her as well, she’s not truly horrible,’ adding that Nicola winning Villain of the Year three times was due to her ‘jokey’ side.

‘I like Nicola because there’s a good sense of humor around her,’ Nicola continued, before teasing: ‘Maybe if I don’t die before the 50th obviously I can get a bit of comedy in.’ 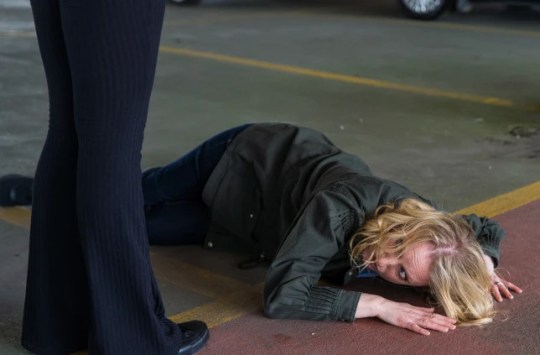 Speaking about the brutal fight scene, in which a stunt double actually played Nicola the star confessed, she said: ‘I shot all of the scenes you see this week and next week before we did the fight.’

She continued: ‘We filmed the ending of the fight with three different versions because we wanted to play around with the future.’

But, with Nicola now unable to leave the house, who knows what’s to come?

The actress teased: ‘Nicola doesn’t handle the vulnerable side of her very well,’ adding: ‘She decides to take the route of lying that she’s okay and it backfires totally.’

‘She tries to bury her emotions, feelings, fears,’ which later leads to her agoraphobia and monophobia, Nicola explained.

‘It’s like a waterfall effect, she just spirals out of control.’

Speaking about what’s to come for her character, Nicola shared: ‘She thinks she’s gathered her strength back but it gets worse and worse,’ hinting that ‘just when you think this story may have been put to bed, something else comes along that might mean she can’t spend time in the village alone.’