Bernice (played by Samantha Giles) has been struggling to trust her partner Liam (Jonny McPherson) on Emmerdale in recent weeks.

The doctor was attempting to keep his history with wife Lara, who died before he arrived on the village in 2014, a secret, but Bernice simply couldn’t let the mystery lie.

While Liam did his best to share with Bernice, explaining it was too painful to talk about Leanna Cavanagh’s (Mimi Slinger) mother, the salon owner confided in her sister Nicola King (Nicola Wheeler) she still isn’t sure of Liam’s character.

Looking after Liam’s bag in the Woolpack, Bernice couldn’t resist rifling through the contents in last night’s episode, and she was horrified to come across a black balaclava mask.

Unable to sit on her findings, Bernice heads straight to see Liam to confront him over the mystery object, and Liam is set to have a strange reaction.

But what if its origin has nothing to do with the mystery surrounding Lara and in fact the medical professional has been using it to spy on Maya (Louisa Clein)?

Throughout the trial, Liam was present and did his best to support David Metcalfe (Matthew Wolfenden) and Jacob’s biological mother Leyla Harding (Roxy Shahidi).

He admitted he felt guilty for bringing his ex-wife to the village in the first place, and was eager to help the family in any way he could.

It wouldn’t be too much of a stretch to guess Liam became obsessed with watching and monitoring Maya as she crept back into the village ahead of her court date. 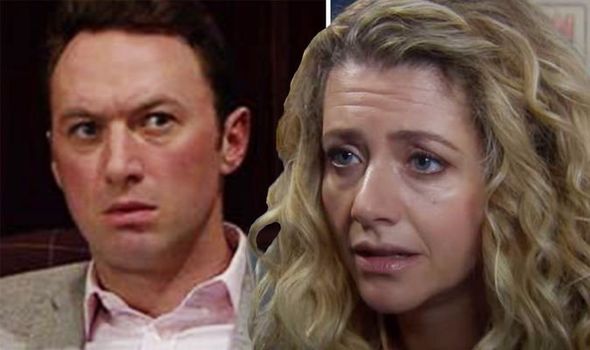 Viewers will remember when Maya was attacked, she eventually claimed the mystery character was a woman.

But what if it was actually Liam donning his mask to take out some of his betrayal and anger against his ex-wife for her actions?

Maya could have realised it was Liam and desperately spun a lie out of embarrassment over being attacked by her former husband.

Tonight’s episode will see Liam getting increasingly annoyed with Bernice, as he thought they’d put her mistrust behind them.

In fact, Bernice is more suspicious than ever of the local doctor.

If the argument doesn’t culminate in Liam making a confession about his actions, it could still be the end of the couple for good.

Liam initially insists that the balaclava belongs to a friend in a bizarre explanation, as he points out the masks don’t only have to be used for sinister reasons.

But it’s unlikely to be enough to assuage Bernice’s worries, as Nicola is adding fuel to the fire behind the scenes, trying to convince her sister she shouldn’t trust her boyfriend.

The couple could be heading for disaster, but is Liam innocent? Viewers are still convinced the bumbling doctor secret murdered his ex-wife Lara all those years ago.