Plenty of people are wondering if Tori Deal and Jordan Wiseley of The Challenge have officially broken up. Despite their emotional on-air proposal and engagement acceptance, the couple has been mysterious in terms of their social media posting.

The duo rose to power during War of the Worlds 2, eventually transferring to the Brits’ team, where Jordan was part of the final winning group. Tori was eliminated during the final, but she still had won an engagement to the man she loved.

The couple returned for Total Madness, with both of them getting sent home in elimination events. Tori is on the new Double Agents season coming up, which has brought some fan speculation about possible cheating on the show. That remains to be seen, though, with the new season coming in early December.

So did Tori and Jordan from The Challenge break up? Here are some of the latest details about the popular couple.

On Wednesday, November 25, Tori Deal shared a new Instagram post of herself and her cat. She seemed to be promoting a particular clothing brand too.

“Cat and plant therapy is a thing,” Tori wrote in her caption for the photo series, in which she tagged Revolve.

That IG post has over 10,000 likes and plenty of comments, including from fans who continue to ask if she and Jordan are still together or broken up.

In one person’s comment on Tori’s post, they asked Tori what happened to her engagement ring, saying they haven’t seen her with it in a while. The engagement ring arrived during the big televised proposal on War of the Worlds 2 where Jordan asked Tori to marry him after winning in an elimination event.

A few other fans chimed in on Tori’s IG post to indicate that Tori and Jordan unfollowed each other on Instagram.

Tori also replied to it, saying, “we’ve been following each other…” to possibly put rumors to rest or quiet down the fans bugging her. 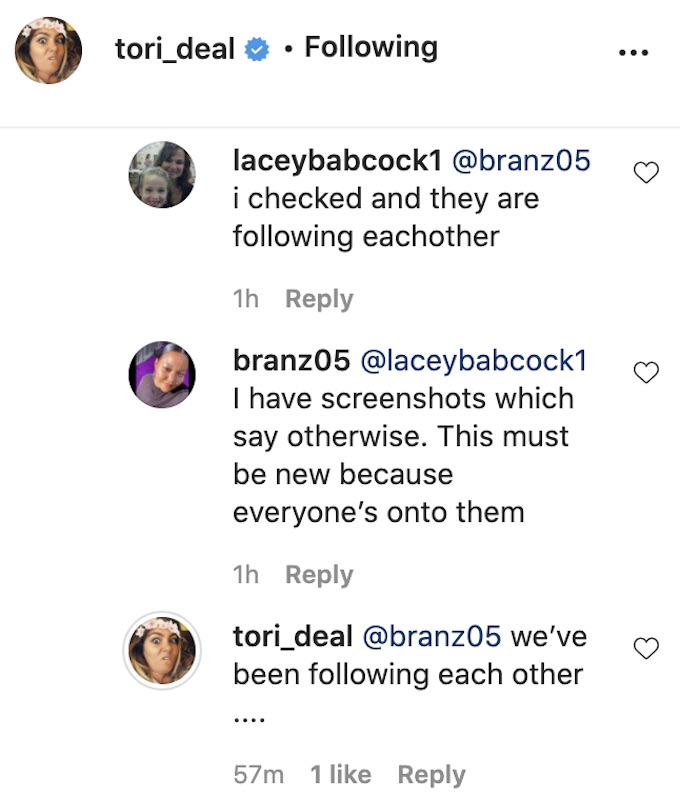 The last time a photo showed up of her and Jordan on Tori’s Instagram page was September 15. In that post, she wished Jordan a happy birthday with “Happy Birthday my love,” as part of a lengthy caption she wrote on a photo that showed him holding her while they both smiled.

On October 25, Jordan and Tori last appeared together in a video on Jordan’s Instagram account to promote a wellness box. That came just one day after a photo post of Tori and Jordan embracing, which seemed to show they had reunited following Tori being away for Double Agents.

However, nothing has surfaced from either one of them featuring the other on their IG profile pages since then.

Based on recent IG Story posts, Tori is spending time with her mother, but Jordan is nowhere to be seen. Fans have asked Jordan on some of his various IG posts about appearing on The Challenge 36, and he told them he was busy filming another project.

In a separate post (captured via the screenshot below), Tori also replied to a comment about a breakup, saying they would let people know what’s going on when they decide to.

As seen in the series of screenshots above, Tori also replied: “fake news” to the rumor that she cheated on Jordan while on The Challenge: Double Agents.

Tori is over the internet trolls

In a post to her Instagram Story on Wednesday, November 25, Tori Deal also stated that she’s over all of the internet trolls harassing her.

She posted a screenshot of herself in workout mode and talked about all the people creating fake accounts to DM her or comment on her stuff.

“There are people out there who actually waste their energy hating and trolling other people. Y’all should put that same energy into yourself and actually become strong and healthy,” Tori wrote on the screenshot.

“I’m over the troll s**t,” she wrote above herself in the photo. 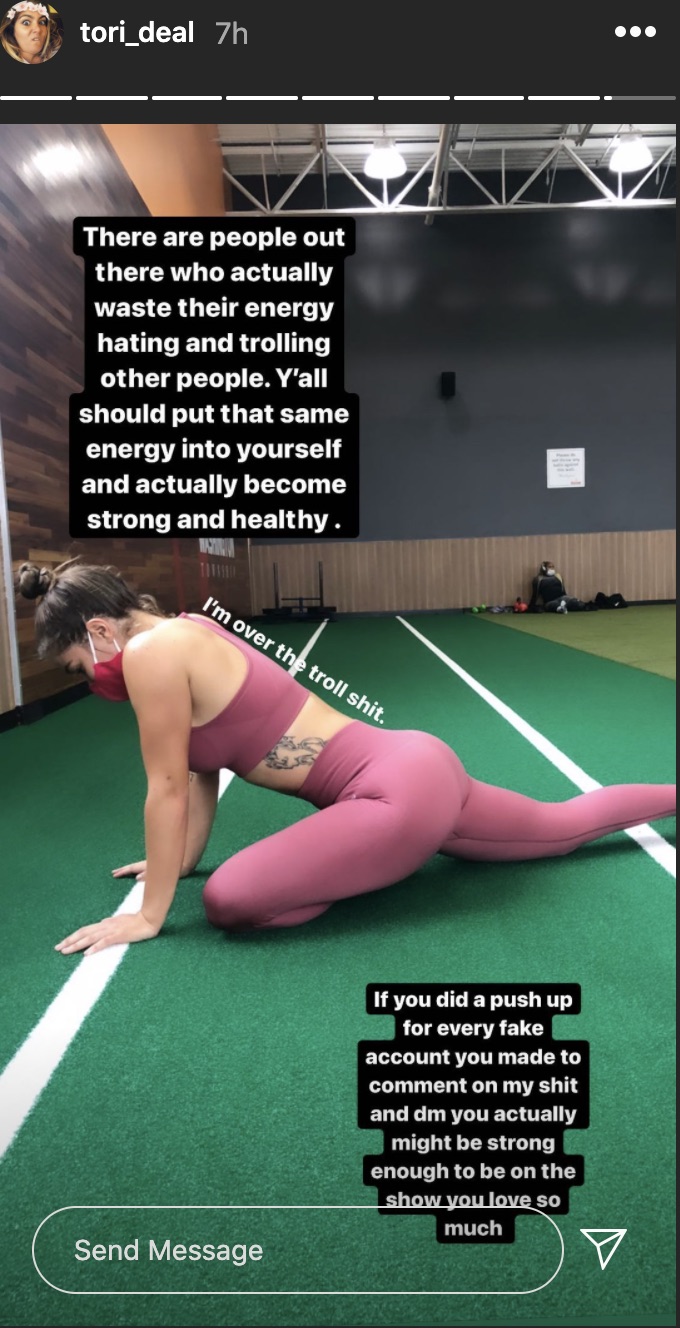 As seen in her screenshot, she finished by telling people if they spent all that time working out, they might be strong enough to compete on The Challenge as well.

While that doesn’t necessarily say whether or not Tori and Jordan broke up, it seems to show that Tori might be getting sick of all the questions and comments about it. There has been fan speculation about Tori cheating with another Double Agents cast member, but there’s no confirmation anywhere.

Like several fans mentioned in her post, Tori and Jordan may want privacy in dealing with the matter if something is going on. It may take time before the real story comes out. It may even be part of what’s shown on The Challenge: Double Agents.

That said, plenty of fans are hoping they haven’t broken up and that this power couple will remain strong together.