Did the Simpsons predict Trump would die of COVID? Here are the facts about that coffin 'death' picture

The Simpsons have become well-known for predicting the future in their long 32-season run. And in 2016, many fans were quick to point out they predicted the presidency of Donald Trump.

Now that Trump has tested positive for the novel coronavirus, many folks online say The Simpsons predicted the president would die from the illness.

In 2000, a season 11 episode called Bart to the Future predicted that an adult Lisa Simpson would one day take over the role of president from an incumbent Donald Trump.

The episode shows Milhouse explaining to President Lisa that she has inherited a broken economy due to Trump’s time in office.

In the meantime, The Simpsons have been credited with predicting everything from an Ebola virus outbreak to three-eyed fish, a Siegfried and Roy tiger attack to cellphone autocorrect, and Lady Gaga performing the Super Bowl halftime show.

However, since last night’s announcement that President Trump and First Lady Melania Trump have tested positive for COVID-19, there’s been a claim on social media that The Simpsons predicted the 45’s death.

Many Twitter users have been posting what looks like a screenshot from The Simpsons, which shows the president lying in a coffin.

The picture has been posted and retweeted by many with comments like “The Simpsons have never lied,” and “Simpson’s ain’t never fail us.” 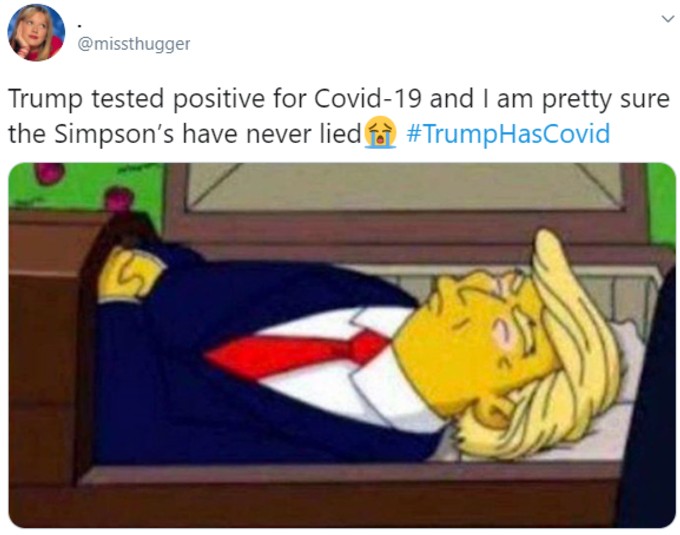 Many of these tweets received thousands of likes and retweets. 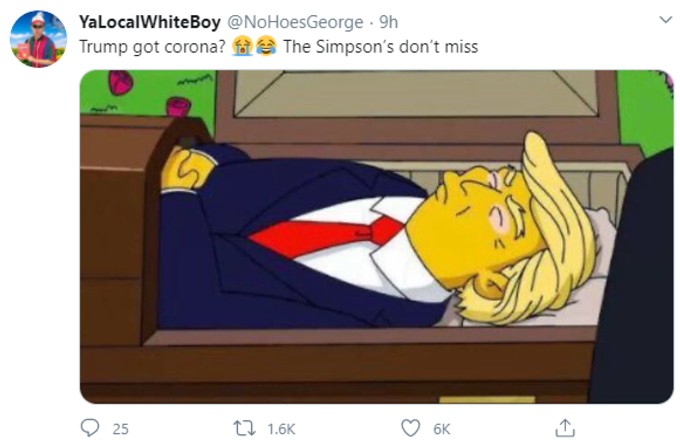 So, did The Simpsons predict Donald Trump’s death?

According to Snopes, the fake image first appeared in February 2017 in a thread on a 4chan.org forum. It was credited to a Huffington Post article, a claim that was also unfounded.

However, this hasn’t stopped the image from trending on Friday.

Another video that occasionally does the rounds online features a Simpson’s version of Trump riding down an escalator, similar to the real Trump when he announced he was running for president.

However, this aired after Trump’s announcement and was created by Animation Domination. 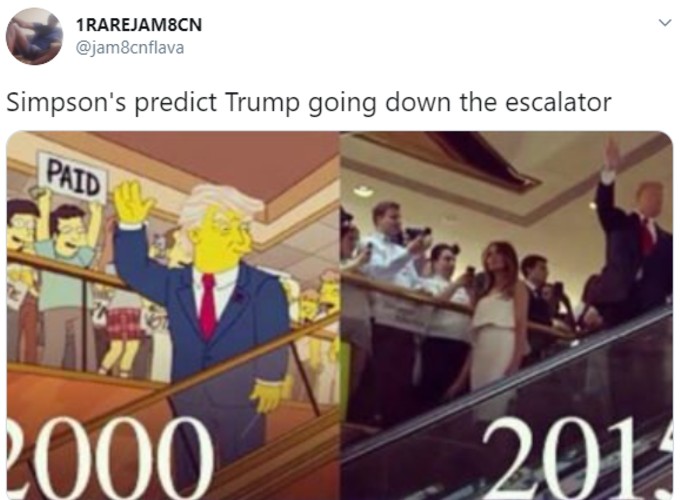 Even the initial joke in 2000 about an outgoing president Trump seems less impressive when you consider that the former Apprentice boss first hinted at a presidential run in 1999.

Earlier this year, many fans of Disney’s Tangled claimed the animated movie predicted the coronavirus outbreak.

The 2010 animated film told an updated version of the Brothers Grimm fairytale Rapunzel. Fans were spooked when they realized the heroine of the story had been kept isolated from the kingdom of Corona.

You can catch all episodes of The Simpsons and check out their many correct predictions on Fox Now and the relatively new Disney Plus.