When “Dexter” premiered in 2006, audiences were only just becoming enamored with antiheroes. Tony Soprano was putting out hits and Dr. Gregory House was abusing his meds, but Don Draper, Walter White, and many more of TV’s thorny bad boys had yet to make their mark. Dexter Morgan, played with an eerie sobriety and winking humor by Michael C. Hall, fit right in, as a serial killer who only kills criminals. Spurred on by his “dark passenger,” Dexter spent his nights stalking, studying, and slicing his pernicious prey, but even his day job (as a blood spatter analyst for the Miami P.D.) saw him obsessing over diabolical deeds and bodily fluids.

And that’s just it: “Dexter” may have risen to prominence under the auspices of TV’s (second) golden age, but what it leaned on far more than its thematic dissection of man vs. monster, nature vs. nurture, was shocking brutality. The early days of antiheroes coalesced with the medium’s embrace of mature content; on premium cable (then on basic cable and soon enough via streaming), there were curse words, sex scenes, and lots of violence, all of which had been previously reserved for the movies. Earlier broadcast dramas like “The X-Files,” that often carried content warnings, helped generate demand for weekly, at-home options for risqué entertainment (along with yielding TV’s ratings system), but for a good decade, it often felt like shows from HBO and Showtime were built around how much sex, violence, and swearing they could offer.

The best of these programs evolved beyond their titillating pegs, and “Dexter” grew in spurts — before succumbing to little more than bloodlust after four-ish seasons. Even a selective rewatch unveils so many of today’s TV red flags, from the series’ voiceover crutch to its disturbing treatment of women. (Even Deb, Dexter’s foul-mouthed sister played by Jennifer Carpenter as the show’s second lead, was given a tunnel-visioned development cycle where she fell in love with a new guy every season until the writers had no one else to pair her with but Dexter himself.) No matter what you thought of the preceding seasons, the ending was almost universally reviled. Here was a story about a serial killer who narrowly avoided getting caught year after year, who saw loved one after loved one die due (in some way) to his murderous hobby, and yet there was no closure provided in Dexter’s miraculous escape from a hurricane, nor satisfying answers given to whether his life thus far had been lived with any purpose. Man or monster? Born to kill, or bred into it by a father feigning help? We weren’t much closer to understanding what truly drives Dexter by the end of Season 8 as we were when he first ominously intoned, “Tonight’s the night.” 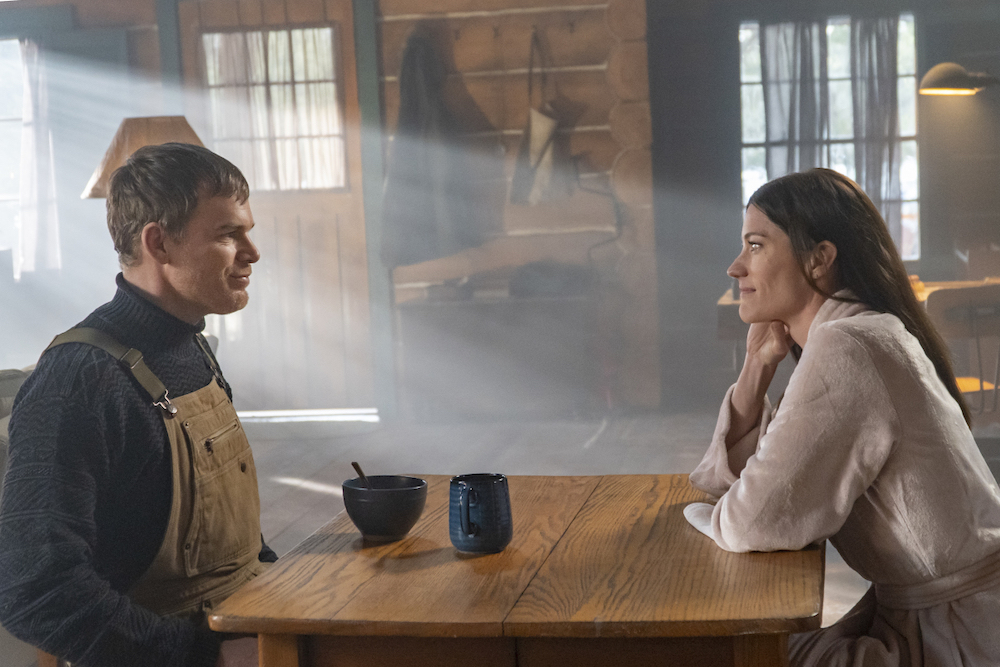 Enter “Dexter: New Blood.” Reunited with Clyde Phillips, the showrunner of Seasons 1-4, Hall’s banished title character has been revived for an “event” season, just over eight years after the original finale. With four of the 10 episodes provided for review, it’s hard to say how much closure awaits returning fans. (Both Phillips and Hall have refused to say if the series actually ends with “New Blood.”) To even describe these initial entries as promising risks falling for the same gambit that left so many viewers irate the last time. But a few things are clear: “Dexter” is still “Dexter,” and Dexter is still Dexter. For all that has changed in the last decade, Showtime’s crime drama — and its conflicted killer — remain the same.

At their core, at least. On the surface, there are alterations aplenty. Having left his old life in Miami behind, Dexter now finds himself on the opposite end of America’s climate spectrum, and he’s reintroduced here huffing and puffing through a light dusting of snow, rifle in hand, Iggy Pop’s “The Passenger” blaring for the audience’s benefit. But when our Carhartt-clad hunter approaches his target (a white buck rather than a human being), he can’t pull the trigger. Not only that, but the audience can’t hear why. Continuing with the trend so briefly established in the (former) series finale, Dexter is a blank slate; a shell of his former self, emptied out by the tragedies he wrought. The voice in his head has been silenced because, if he listened to it, he might kill again, thus endangering anyone he cares about who’s still breathing.

But Dexter being Dexter (and “Dexter” being “Dexter” — sorry, I’ll stop now), he has to be honest with someone about his homicidal thoughts, and it’s not the guiding ghost of dear old dad. So who can he talk to? The choices remain slim. Dexter has established a nice little life for himself in Iron Lake, New York, a fictional small town upstate where everyone knows his (fake) name — James “Jimmy” Lindsay — and he knows all of theirs. “Jimmy” is dating the chief of police, Angela Bishop (Julia Jones), and working at Fred’s Fish and Game as a sales associate. While his relationship keeps him informed about police business, he’s not a forensic technician anymore; they don’t even know that’s what he used to do, since that would bring up too many questions about a past Dexter hides from everyone.

Still, like all those bodies at the bottom of Bay Harbor, the past won’t stay buried. Dexter’s son Harrison (now played by Jack Alcott), who we last saw in an Argentine café being cared for by Dexter’s last girlfriend Hannah (Yvonne Strahovski), reemerges in Iron Lake, looking for a father he long thought dead. Deb reappears, as well, though all I can say about the actually dead Morgan sibling is that her role here is a “new iteration.” Balancing his repressed urges and plan to stay hidden with burgeoning threats and a desire to be a good dad proves difficult for Dexter, and soon his isolated existence is awash in complication. 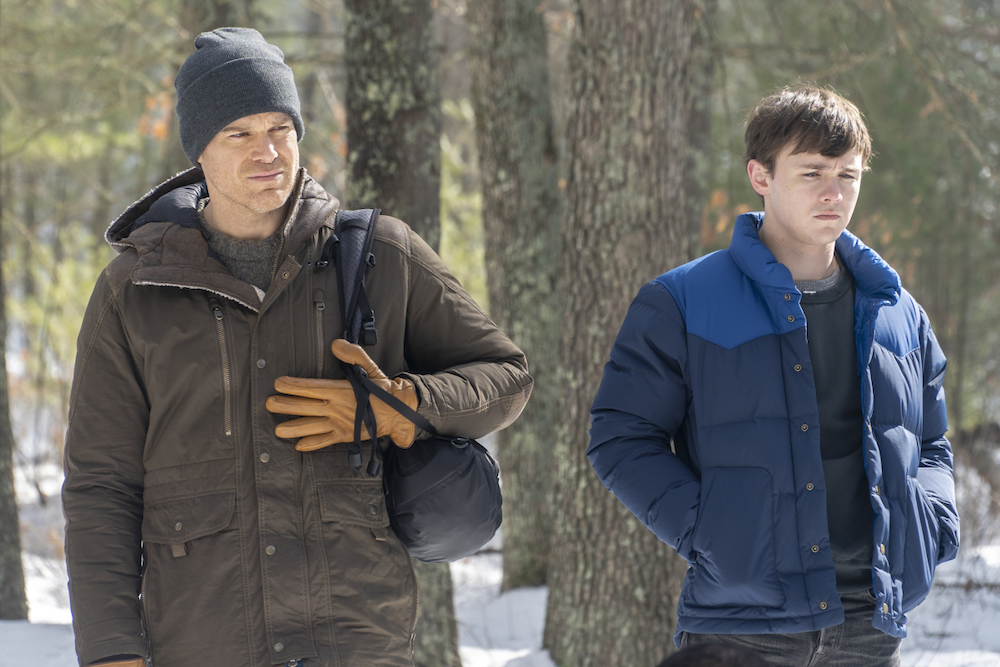 Many of the ensuing story beats will feel familiar, even soothing. Watching Dexter scramble (rather expertly) to cover his tracks is still engrossing. (The intellectual understanding that he should get caught refuses to gel with our emotional desire for him to be free, god bless it.) Even though a grim depression hovers over his self-exiled state, Phillips finds a few inroads for Dexter’s dark sense of humor. (“New Blood” could use more, but there’s reason to believe they’re coming.) And Hall remains a talented two-face, able to convey a separation from other human beings even when Dexter’s “pretending” to enjoy their company, just as he’s capable of twisting his character from a man crushed by his own urges to a monster who’s only alive when he succumbs to them.

Other hallmarks aren’t so welcome. Supporting characters are thinly sketched. Nods to local customs and indigenous people seem superficial so far. The show’s disdain for journalists is alive and well, indulging once more in the ugly trope of a female reporter sleeping her way to a good story. And “Dexter: New Blood” goes out of its way to become another Dead Girl Show, introducing a mysterious side-plot about a local kidnapper who enjoys killing wayward women. Almost all of these red flags may be reined in (to various degrees) in the back-half of the season, but isn’t that level of unsubstantiated hope reminiscent, as well? Isn’t that the same misplaced faith that led so many to watch “Dexter” to the very end? Should audiences really reinvest in this character, after nearly a decade of much-needed distancing?

Like Dexter being lured back to his dark passenger, there are temptations. The father/son story shows an interest in exploring Dexter’s natural vs. learned duality with an earnestness not glimpsed since the first few seasons. Could Harrison hold the answers Dexter has been searching for all his life? Can he save his son and, in turn, himself? Whether “New Blood” answers these questions or not, only you can tell if the query is enough of a draw. “Dexter” is still “Dexter.” Let your conscience be your guide.