‘Dark’: Here Are 8 Easter Eggs You Might Have Missed Amidst All Those Time Travel Shenanigans

Netflix’s sci-fi series “Dark” requires intense concentration to watch, and not just because viewers have to put down their phones to read the subtitles. Created by Baran bo Odar and Jantje Friese, the German-language series packs in a dense story about the small town of Winden, whose residents harbor secrets spanning generations, including the abduction and murder of young boys. On top of that, frequent time travel makes it difficult to keep storylines, genealogy, and even concepts of spacetime straight.

Therefore, viewers could be forgiven for missing smaller details amidst all of this insanity. But just as the creators are fond of meticulous plotting, so too are they about including hidden meanings and jokes throughout the series. And yes, “Dark” is funny, even as everyone’s lives are at stake. Really, what’s funnier than finding out that your daughter is also your mother?!

Here are eight things you might not have noticed about “Dark” the first time you cycled through it:

To channel Richard Dreyfuss, “This means something!” The name of the town in German could mean many things, including “wind,” but the show’s creators have gone with the meaning “twist” or “spiral,” which makes sense in this winding story that is full of twists and even turns back on itself. Basically, Winden couldn’t escape its destiny. 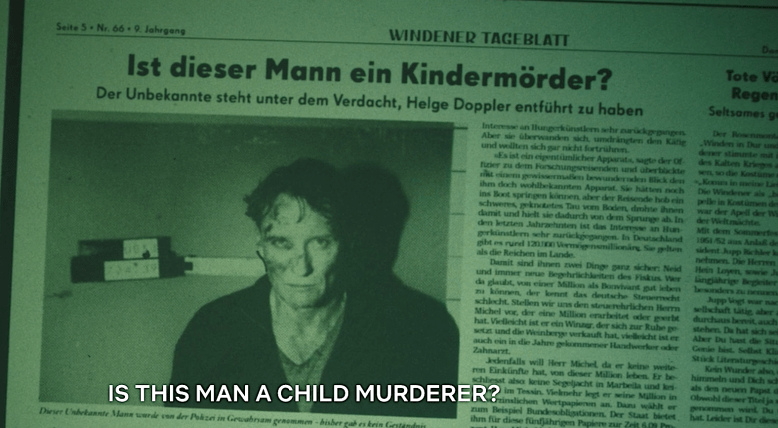 In the 1953 article about Ulrich (Oliver Masucci) that can be seen throughout the series, it begins with straightforward text reporting the story:

Headline: IS THIS MAN A CHILD MURDERER?
Deck: The stranger is under suspicion of having abducted Helge Doppler.
Photo caption: This unknown person was taken into custody by the police – so far there has been no confession.

One eagle-eyed (and German-reading) Redditor, however, noticed that the body of the article foregoes the usual “lorem ipsum” Latin and instead uses lines from various works by Franz Kafka, including “The Metamorphosis,” “The Trial,” “The Hunger Artist,” and “In the Penal Colony,” among others. Kafka’s writings blend the real and the fantastic, and often carries an element of threat to them. Even the word “Kafkaesque” describes situations or stories that are “marked by a senseless, disorienting, often menacing complexity” or “by surreal distortion and often a sense of impending danger.”

Specifically in relation to Ulrich’s situation – in which he’s wrongfully jailed for murder in another time period – “The Trial” and “In the Penal Colony” follow parallel themes of guilt, anxiety, crime, punishment, and even torture.

Even the story in “The Metamorphosis,” about a man named Gregor who finds himself suddenly changed into some sort of human-sized bug, can apply to this situation. Kafka used the vague phrase “ungeheures Ungeziefer,” which actually translates to “a monstrous vermin,” which doesn’t specify if he’s a cockroach, a moth, or anything specific. But the transformation causes everyone to regard him with horror, much like how Ulrich is now being treated like a monstrous child killer. 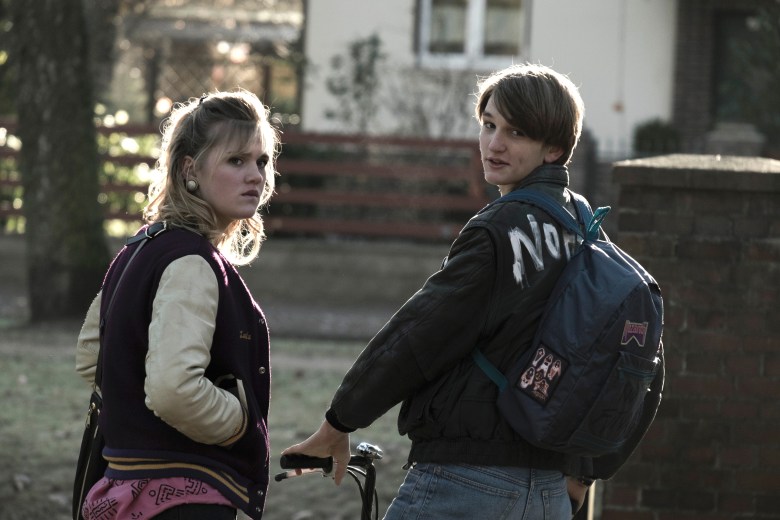 This phrase is a favorite for teenage Ulrich from 1986 and is seen on his bedroom wall, his jacket, and as graffiti at the nuclear power plant. It’s closely linked with the punk movement and most specifically the Sex Pistols song “God Save the Queen,” released during Queen Elizabeth II’s Silver Jubilee in 1977. “No Future” is the original song’s title and that phrase can be found in the lyrics.

While Ulrich himself can be seen as having no future – after spending 33 years either jailed or incarcerated in a mental institution, it doesn’t look like he’s escaping again any time soon – these words hold even greater meaning for Winden itself. In 2020, it is subject to a nuclear holocaust, in which only a handful of people survive. Also, Season 2’s main antagonist Adam (Dietrich Hollinderbäumer) wants to create an apocalypse that will do away with time itself, which he deems to be a sort of freedom – but could spell an end to everything.

Mikkel (Daan Lennard Liebrenz) idolizes Houdini and practices magic tricks, one of which is the ball and cup trick, but using only two cups. It’s all about sleight of hand, and he explains to his father it’s not how he did the trick, but when. This foreshadowing for Mikkel’s own disappearing act – not from Winden but from the year 2019 to 1986. Later, when he shows the sugar cubes under both cups– that also represents himself straddling both time periods.

Also, Nurse Ines (Anne Ratte-Polle) tells Mikkel the story of Chinese philosopher Zhuang Zhou, who once dreamt that he was a butterfly. But when he woke, he couldn’t tell if he was himself or a butterfly who dreamt he was Zhuang Zhou. It’s a popular story and is often compared to “The Metamorphosis” because of the insect themes, and questioning one’s reality based on perceptions.

Finally, here’s a funny joke made at Mikkel’s expense: In 2019, when his sister Martha (Lisa Vicari) is embarrassed by his magical shenanigans, she asks her mother, “Are you sure he’s not adopted?” Although that’s the usual sibling joke, it’s also a reference to how Ines adopts Mikkel when he travels to the past. 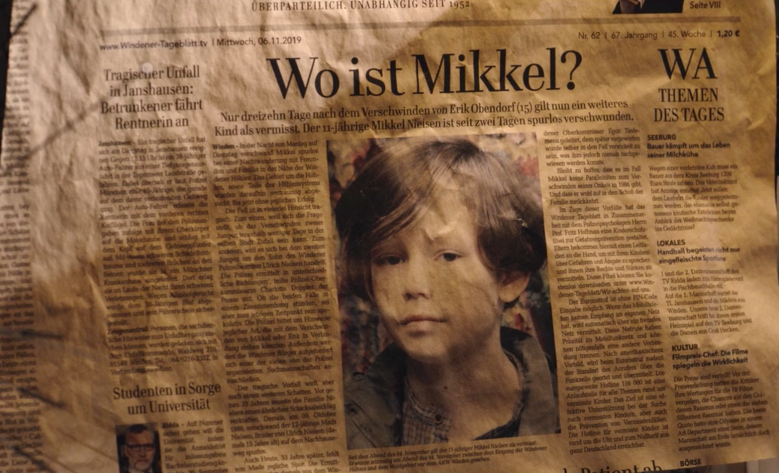 In the article about Mikkel going missing, another German-reading Redditor noted that the article on the left is about an old person who died in a car accident. This is most likely a nod to Old Helge Doppler (Hermann Beyer), who had traveled back to 1986 to try to prevent his middle-aged self (Peter Schneider) from abducting boys. The senior Helge crashes his car and dies while running into his younger self. 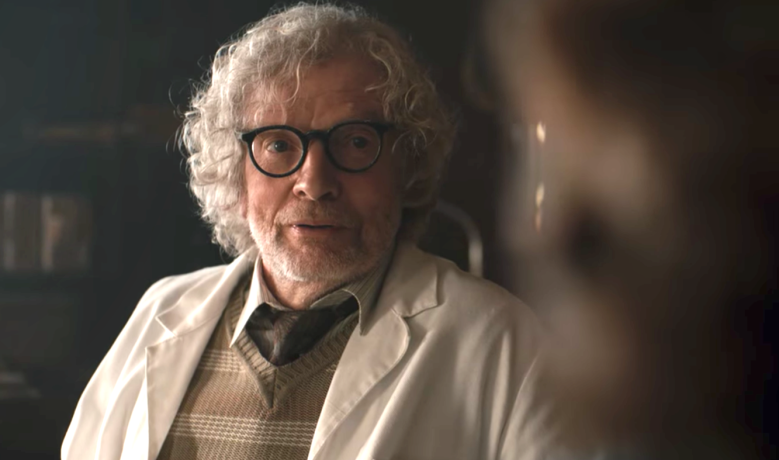 Although all names have meaning, some definitely appear to be more significant than others on the show. The “H.G.” in clockmaker H.G. Tannhaus’ name is a reference to “The Time Machine” author H.G. Wells, who popularized the concept of time travel in pop culture. The surname could be a reference to the Tannhäuser gate in the “Blade Runner” universe, which is a warp portal for multidimensional interstellar space travel. 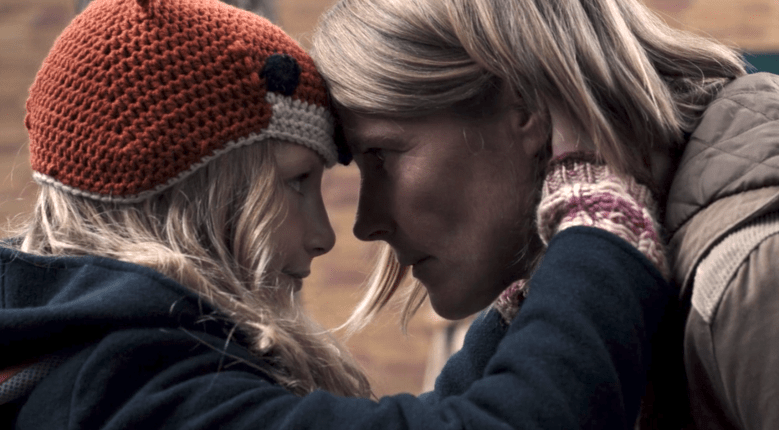 “Doppler” in German means “double,” which could refer to any number of things in this show, including the dual lives, timelines, and universes. But it could also refer to the Doppler effect or Doppler shift, a phenomenon in which the change in frequency or wavelength of a wave in relation to an observer who is moving relative to the wave source. The Doppler effect is why cars coming toward someone and then driving away will sound and sometimes even look different.

With the latest development for the Doppler family in Season 2, this could have greater significance. Winden police chief Charlotte Doppler (Karoline Eichhorn) learned that her daughter Elisabeth (Carlotta von Falkenhayn) survived decades after the nuclear holocaust and had a daughter, who was then taken back through time and raised. That daughter is Charlotte. So each woman is each other’s mother and daughter, a dual identity. But also, depending on perspective or age, one could be considered more of a daughter or a mother. 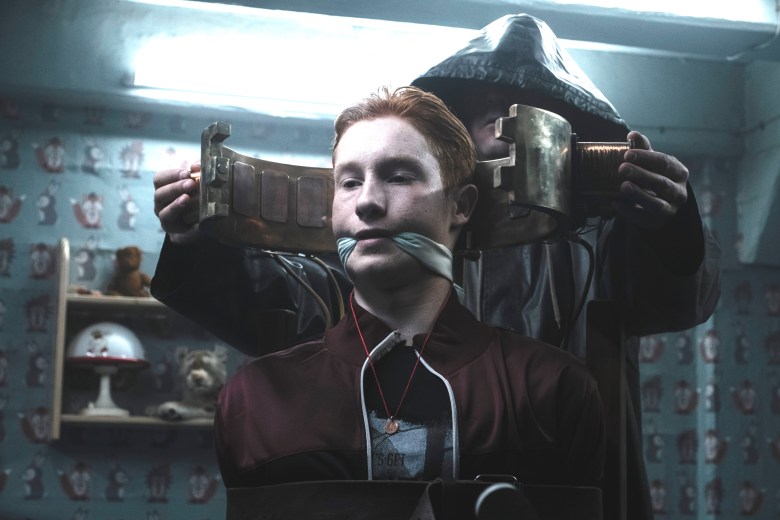 The priest Noah (Mark Waschke) is also known by the name Hanno Tauber. The surname means “deaf person,” which could be a reference to Elisabeth, who is hearing impaired. Noah also survived the apocalypse and had a relationship with Elisabeth, resulting in Charlotte. But he also was responsible for putting those poor boys in the ’80s time machine prototype, which inevitably blew out their eardrums.

“Dark” Seasons 1 and 2 are currently streaming on Netflix.