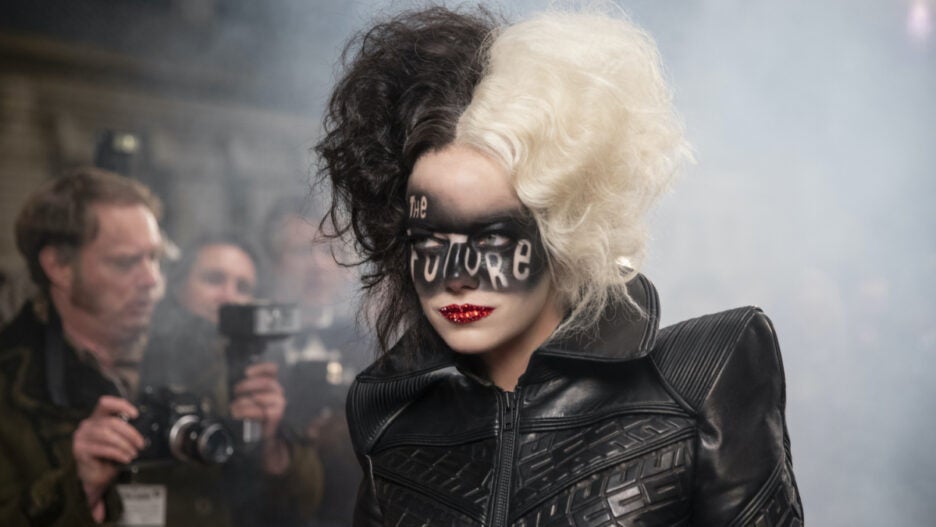 “Cruella” is loaded with pop-song needle drops throughout, but it’s the oft-used Rolling Stones hit at the end that ties it all together: The studio that gave us “Maleficent” and the director of “I, Tonya” have teamed up to rehabilitate yet another villain, in a film that could have just as easily been titled “Sympathy for the de Vil.”

Yes, the dastardly fashionista who wanted to skin 101 Dalmatians just to make a coat has been officially retrofitted here, but there’s plenty to enjoy if you don’t mind the fact that this new version of the character eschews fur, canine or otherwise, and doesn’t even smoke. Purists may balk, but viewers who think of this less as a reboot of Dodie Harris’ memorable monster and more as a Disney spin on Derek Jarman’s “Jubilee” for gay 8-year-olds will find “Cruella” to be flashy fun, even at a slightly bloated two-hours-plus running time.

Emma Stone plays the title role, stepping in for Betty Lou Gerson (who memorably voiced Ms. de Vil in the 1961 animated adaptation of Harris’ novel) and Glenn Close (who camped her way through two live-action versions, and is an executive producer of this new film). She doesn’t quite embody the character’s flamboyant malevolence — even if she patterns her laughter on a TV viewing of Tallulah Bankhead in “Lifeboat” — but for an origin-story version of the character, she captures the wicked gleam of a brilliant young woman coming to understand her own power. 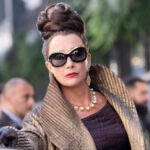 In this version, we meet young Estella (played as a schoolgirl by Tipper Seifert-Cleveland, “Krypton”), misunderstood by most of her classmates and mocked for her half-black, half-white hairdo (she’s born with it) and her proto-punk sensibility. (It’s 1964, and she’s already bedazzling her blazer with safety pins.) She’s a sweet girl (who takes loving care of a stray mutt) but when bullies pick on her, the darker side of Estella’s personality, Cruella, emerges.

After one too many school fights, Estella and her single mom try to move to London; en route, they stop at a fancy manor where a ball is taking place. Estella sneaks in for a closer look, the Dalmatian guard-dogs give chase but instead wind up taking her mother over the side of a cliff. Haunted by guilt, Estella makes it to London alone, where she falls in with young criminals Horace and Jasper (who have an adorable dog of their own). 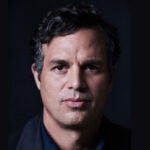 Following a childhood of crime, adult Estella (Stone) is ready to make a splash in the fashion world, and her vandalizing of a department-store window captures the eye of the queen of London’s couture world, the Baroness (Emma Thompson), who hires and exploits the newbie designer. But as Estella comes to realize that the Baroness is responsible for her life’s misery, she assumes her Cruella identity, and with the help of Horace (Paul Walter Hauser) and Jasper (Joel Fry, “Yesterday”), sets out to take her down.

Placing these characters in the ’60s and ’70s allows director Craig Gillespie and screenwriters Dana Fox and Tony McNamara to place the characters into an exciting moment of fashion history — Cruella gets to blossom from Mary Quant into Vivienne Westwood, with the help of sidekick Artie (John McCrea), who looks like Bowie, sings like Marc Bolan, and runs a shop not unlike Malcolm McLaren’s. (Costumer Jenny Beavan, art director Martin Foley, and production designer Fiona Crombie, and their respective departments, all seem to be enjoying and making the most of the film’s period demands.)

It’s a thrill to watch Stone jump back and forth between good-girl Estella and glamour-demon Cruella, even if the film gets bogged down in a subplot about how she’s not being nice enough to her lifelong sidekicks once the Cruella side takes over. Ultimately, it’s all she can do to hold her end of the screen opposite Thompson, sinking every last tooth into a role that’s half Miranda Priestley and half Reynolds Woodcock, mainly for the benefit of young viewers who haven’t yet seen either “The Devil Wears Prada” or “Phantom Thread.” (She’s the screen’s most vituperative Baroness since “The Sound of Music.”) 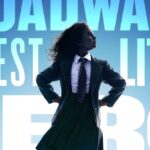 “Cruella” is mostly a two-hander between these actresses, although Hauser provides plenty of physical comedy (and his blustery Cockney accent is better than you might expect), while McCrea is such a delectably androgynous presence that he seems to have time-warped in from “Ziggy Stardust and the Spiders from Mars.”

Yes, Disney die-hards may blanch at the thought of a non-smoking, PETA-friendly Cruella, but if Batman can be Adam West dancing the Batusi and Christian Bale having an existential crisis, who’s to say that there can’t be more than one version of this dog-obsessed diva?

“Cruella” opens in US theaters and on Disney+ Premier Access on May 28.