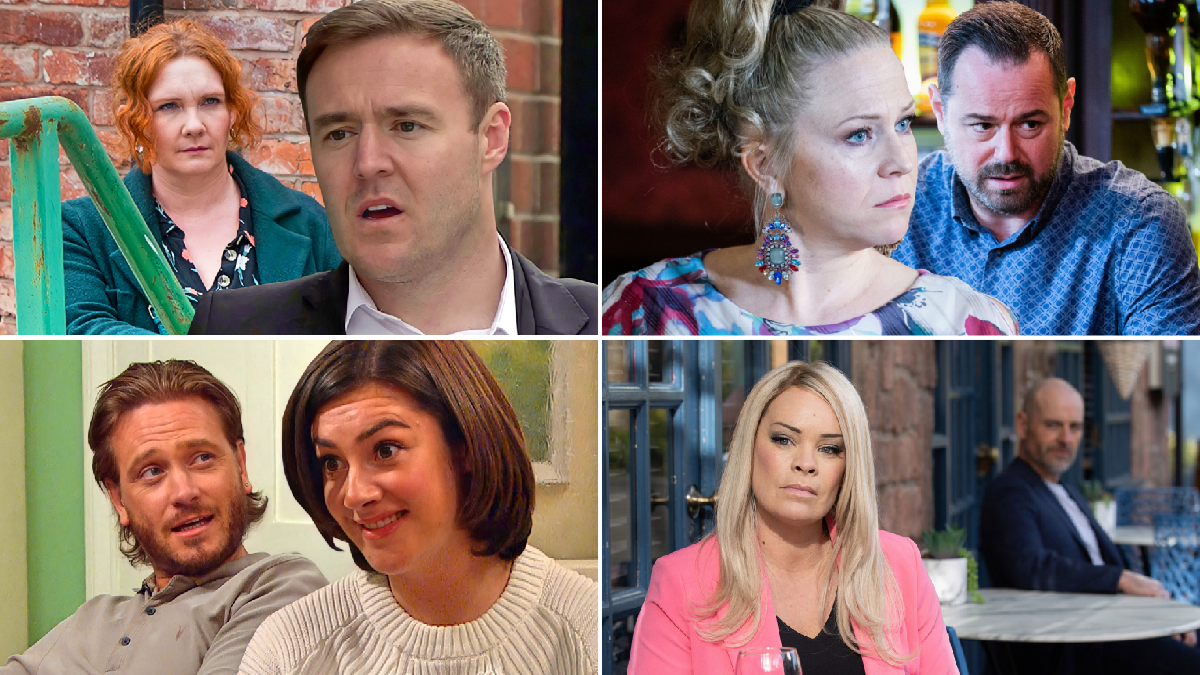 With death, chaos and destruction aplenty in the soaps this week, you can rest assured that the aftermath will make next week necessary viewing!

And with Euro 2020 still raging on, next week’s editions of Coronation Street, Emmerdale and EastEnders will be available to stream all in one go on ITV Hub and BBC iPlayer.

Tyrone Dobbs reels as he learns that Alina Pop is pregnant, and he’s soon forced to tell his ex Fiz Stape all about it. How will the Corrie legend take the news?

EastEnders’ Linda Carter, meanwhile, receives a birthday gift from Max Branning, which puts both she and Mick in a tricky position, while Emmerdale celebrates Pride in unforgettable scenes.

And Hollyoaks, which will air as normal on E4 and Channel 4, sees Grace Black arrested, after sneaky Fergus Collins takes revenge.

It’s a week in soapland that will change a lot for many, and whether you’re bingeing, rationing out or simply catching them when they air on the telly, trust us: next week is not to be missed.

Alina is worried that she might be pregnant, but she soon has other things on her mind when the factory workers discuss Tyrone’s past with Kirsty. She’s hurt she didn’t know about what her partner went through, and therefore she confronts him on the matter, revealing that she’s pregnant! Tyrone is floored, but leaves immediately to attend his meeting at the undertakers. Fiz, meanwhile, assures Ty that he’s a great dad, revealing that she’s happy to sort joint custody. What’s more, she even offers to attend Kirsty’s funeral with him. Afterwards, he tells Fiz about Alina’s pregnancy.

Nick is upset that Natasha won’t allow him to see Sam, but David comes up with a plan when he discovers that Gail is looking after the little lad, pressurising his mum to let Nick see him. Gail, however, is adamant that they must respect Natasha’s wishes. David, refusing to give up, dupes Gail, and Sam and Nick ultimately come face-to-face! A row subsequently breaks out, and Gail is left clutching her chest in pain. An ambulance is called, as Gail accuses her children of causing her heart attack! Will she be okay?

James is floored when his manager recommends that he replace retiring Tommy Orpington. He later spots old flame Danny at the bar, and they catch up over lunch. Little do they know that there are photographers nearby! James wants to give it another go with Dany, but Danny refuses, as he doesn’t want to hide their relationship. The photos, meanwhile, surface online, with people posting derogatory comments about James’ sexuality. This, coupled with questions from the press, results in him telling the truth, as he bravely announces that he’s gay.

Linda is shocked to receive a birthday present from Max. With the gift having come from Croatia, she and Mick are conflicted over whether or not to tell Rainie. Their attention is diverted elsewhere, however, when Frankie throws her a birthday party. Linda is not pleased, as the party is drawing unnecessary attention to her pregnancy. Jack arrives, and Mick and Linda are forced to make a decision.

Bernie thinks the diet pills aren’t working fast enough, and therefore she asks Tiffany to get her stronger ones. Tiffany refuses at first, but ultimately complies. Vi and Rainie, meanwhile, join Bernie at her weight loss group, and later Rainie and Stuart ask Bernie to be their surrogate. They agree to do the insemination this week, and afterwards, Rainie hands over the first instalment of the cash, but it’s less than agreed. Tiffany demands that Rainie pay Bernie all of what she’s owed, forcing Rainie to admit that she’s paid for a private investigator to track down Max.

Isaac is distracted once again, but he covers, ensuring that Lola is none-the-wiser. They meet for lunch, and he takes her to the allotments, promising her a surprise. But just what does he have in store for her?

Faith falls over, and Cain and Chas think she’s drunk. Manpreet, meanwhile, convinces her to undergo tests, and – after another collapse – she opens up to Eric about how she fears her cancer is back. Brenda later finds Faith in Eric’s bathrobe! Chas berates her mum before she can explain, and Eric tells Faith he won’t throw away his relationship with Brenda, and therefore instructs her that she needs to come clean about what’s going on… and he wants her to do it today!

The village prepares for its first ever Pride event, thanks to the efforts of Andrea. Andrea informs Charles that she has an extra special guest to open the event, while Ethan makes an eloquent speech and offers a message of acceptance for all. The Vivienne is called to the stage, as she officially opens Pride!

Things heat up between Aaron and Ben as they get flirty. Ben, however, is stopped in his tracks by an unwelcome and mysterious phone call.

Grace decides to change up her approach in her efforts to get revenge on Fergus. In fact, she resolves to play nice! However, it’s all part of a bigger plan, as she later embarrasses the gangster in front of a potential tenant! Fergus is livid, and wastes little time in retaliating, as he gives a false statement to the police, and gets Grace arrested! The audacity of this man!

Grace has an ultimatum on her hands, as Fergus tells her he’ll change his statement if she signs over all her shares in The Loft. But, refusing to back down, Grace has another has another trick up her sleeve, as she sets out to dig for dirt on the gangster. And she later gets her hands on his laptop!

Cleo is on a mission to bring Pete to justice, and she manages to find his contact details. Toby, however, is not too keen on her plans. It soon comes out that Cleo’s bulimia is relapsing, as she obsesses over Pete. The young woman then makes a drastic decision, but just how far will she go?