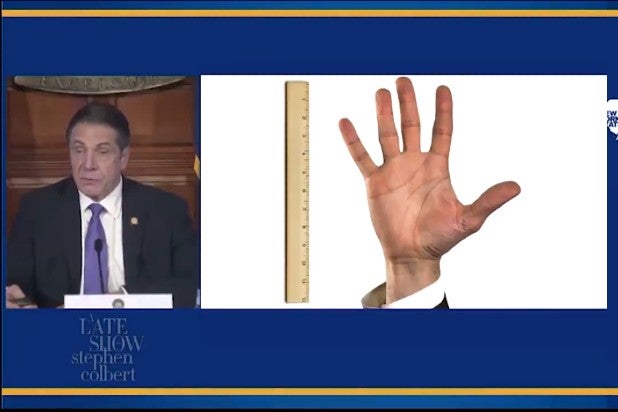 One of the less flattering accusations from the very much still ongoing scandal enveloping multiple accusations of sexual harassment against NY York Governor Andrew Cuomo comes from accuser Charlotte Bennett, who among other things told investigators that Cuomo is obsessed with his hands.

Specifically, she told investigators he likes to make references to the size of his hands, which according to her account seems to be an attempt to imply he has a large penis. And on Tuesday’s “The Late Show,” Stephen Colbert grabbed onto that particular aspect of the scandal for a fun video combining it with the thing that made Cuomo pretty popular in New York last year — his COVID-19 press conferences. (Well, popular right up until he admitted he covered up COVID deaths in nursing homes, which critics say was done to make himself look better.)

In the clip, taken from a recent such press conference, Cuomo gives a normal-sounding update about the COVID-19 state of things. But instead of showing slides related to the pandemic, the presentation is nothing but increasingly obvious jokes implying that hand size and penis size are correlated.  Watch the clip below:

Earlier Tuesday, Joe Biden said in an ABC News interview to be aired Wednesday that Cuomo should resign if an investigation into the sexual harassment allegations confirms he acted inappropriately.

He continued, “A woman should be presumed telling the truth and should not be scapegoated and become victimized by her coming forward. There should be an investigation to determine whether what she says is true, that’s what’s going on now … It takes a lot of courage to come forward. So, the presumption is they should be taken seriously. And it should be investigated. And that’s what’s underway now.”