CHLOE Burrows' family has begged Love Island fans to "be kind" after she received a barrage of death threats telling her to "die".

Cruel fans hit out after late arrival Chloe Burrows picked Aaron Francis to couple up with, causing his partner Shannon Singh to be dumped from the villa.

🌴 Read our Love Island 2021 live blog for the latest updates 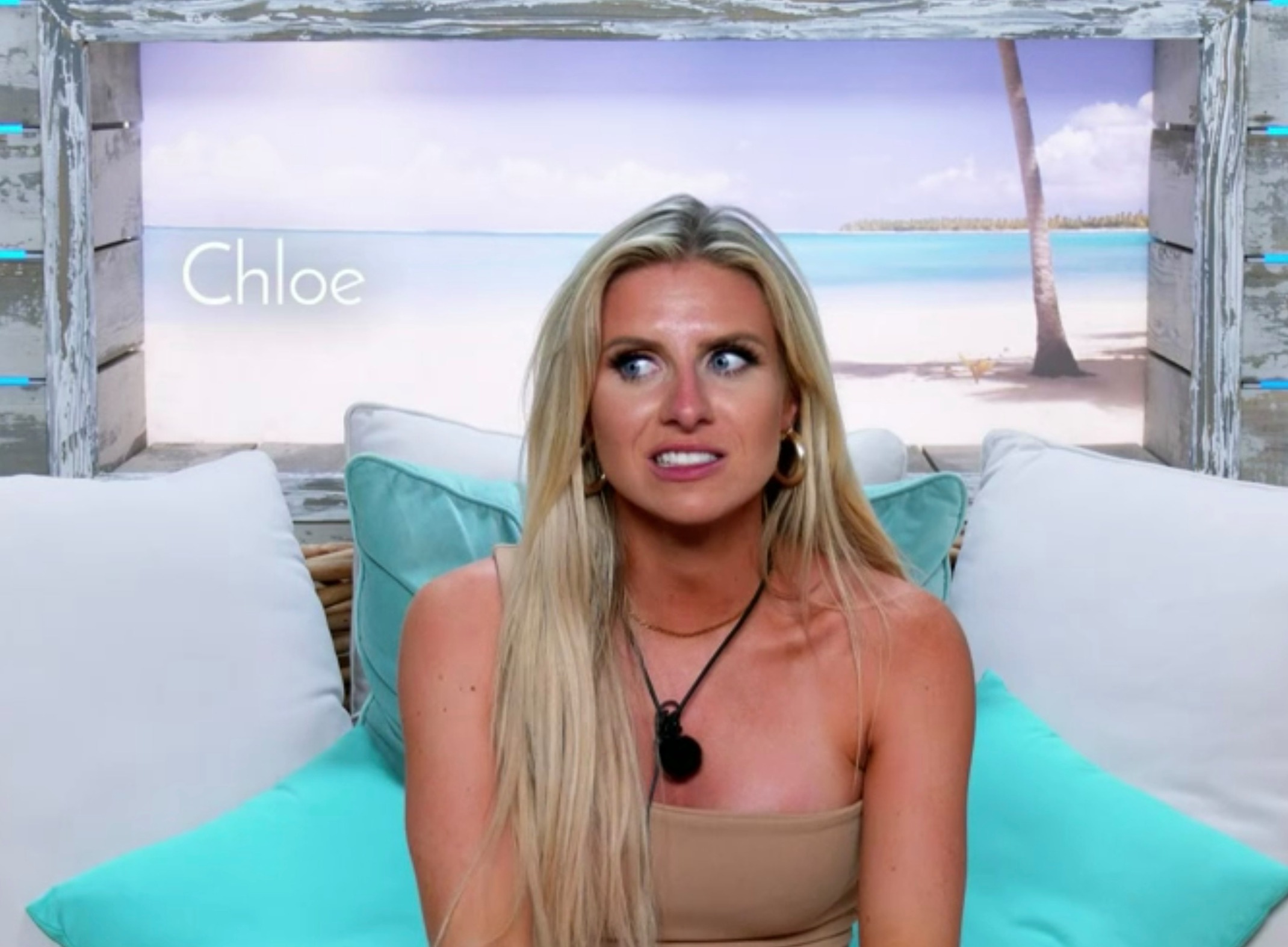 In a statement shared on Instagram, the family said they had not only received death threats aimed at Chloe but also disturbing messages from vulnerable viewers saying they wanted to "kill themselves".

In an emotional statement the family shared: "Morning everyone, Chloe's family & friends here.

"We hate to introduce ourselves under such vile circumstances but we've had enough after just 3 episode.

"We all have thick skin but the amount of trolling Chloe has been receiving is absolutely disgusting. This morning we woke up to yet another DM (see next story" encouraging Chloe to kill herself – there have been HUNDREDS.

"Have the deaths of Sophie, Mike, and Caroline taught us nothing? 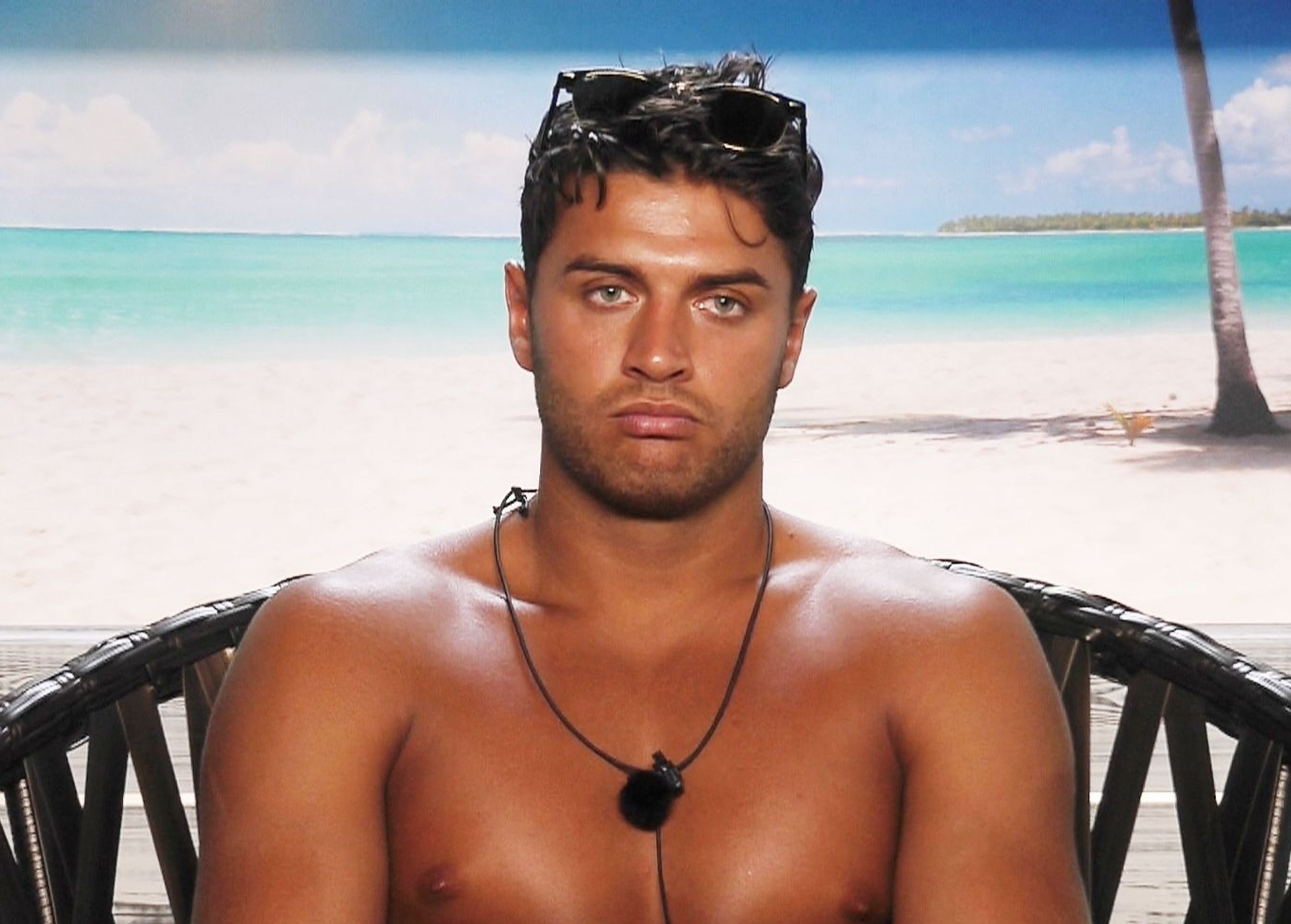 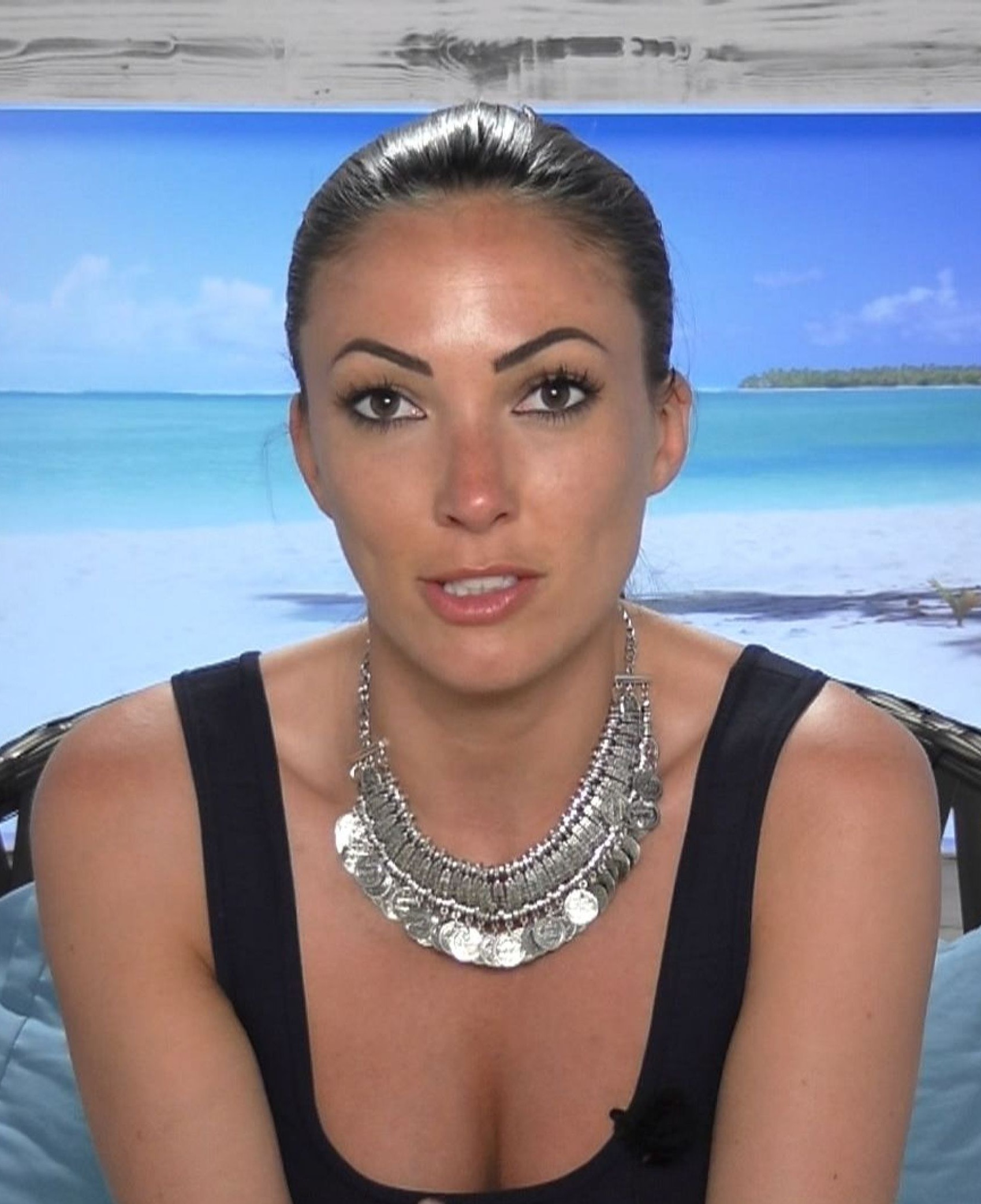 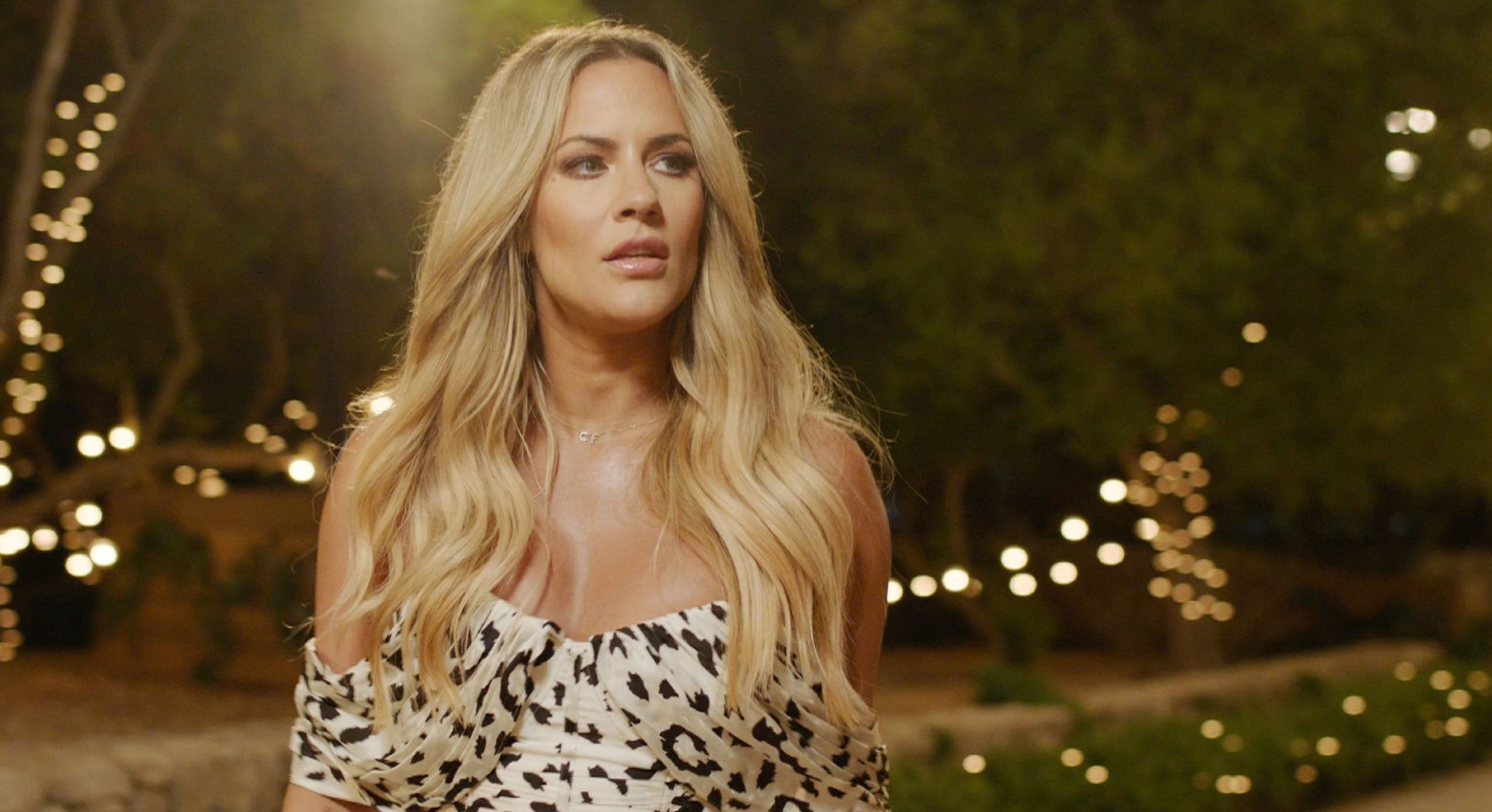 "Not only that, but people are flooding her inbox threatening to kill themselves. People… this is a GAME show, there is a cash prize!

"We understand the frustration surrounding @shannonsinghh's eviction we feel it too! She didn't deserve to leave so early but Chloe does not deserve to DIE because Shannon had to leave the villa! She will have had no idea of the repercussions of her decisions prior to making it.

"We are not naive. We know that this post won't put an end to trolling. All the advice we get is to 'ignore it' and 'block the trolls' sometimes it's not that easy. Our hope is that this just reminds some of you #BeKind" x"

Love Island fans were reeling when show favourite Shannon was booted off.

Shannon and Aaron were coupled up but had no chemistry – and Shannon said it was right that she was the islander to leave. 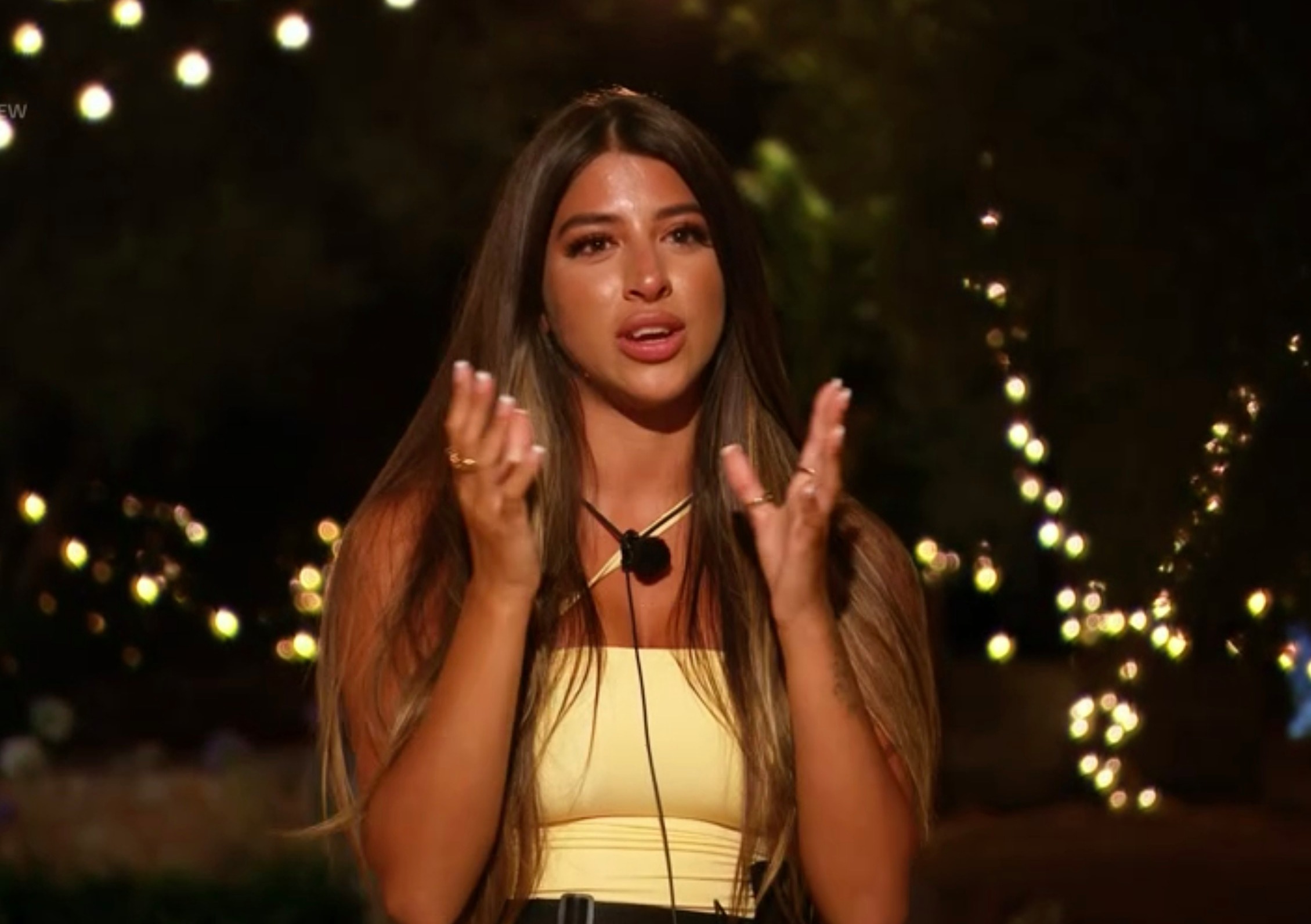 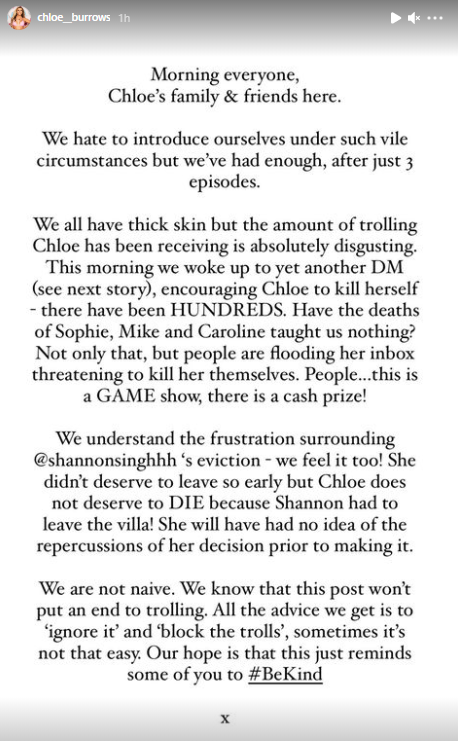 She said: “The minute he walked through that door, his eyes did not get off me. I could feel it. We had a few chats and it was a bit like trying to get blood out of a stone with him.

“He’s a really, really nice guy but he’s just a bit too laid back for me. He agreed with me later, which was a good thing.

“I am a bit gutted. But, out of all the girls, I think it is fair it’s me because I didn’t have any emotional attachments to the guys but all the girls had little things going on.

“I said I didn’t want anyone cocky and arrogant. I think all the guys are good-looking. I just think they were all too pretty for me.”

While Mike Thalassitis who appeared on Love Island in 2017 took his own life in March 2019 aged 26.