Piers Morgan, 54, and his co-host Susanna Reid, 48, welcomed John Humphrys, 76, onto Good Morning Britain to speak about his career as a broadcaster. Having stood down from the role of host of the Today Programme last week, the veteran presenter was quizzed about his real thoughts about the BBC Radio 4 breakfast show.

Having presented the Today Programme for over three decades, Mr Humphrys presented his last show on the BBC radio station a couple of weeks ago.

As he now has spare time to fill in the morning, Piers made a quip this was the reason why the veteran broadcaster was able to speak with him and Susanna today.

Mr Humphrys isn’t the only iconic staple of the show however, as the programme also offers a Thought for the Day segment.

The premises of the segment sees guests discuss topical issues and figures making the headlines from a faith perspective. 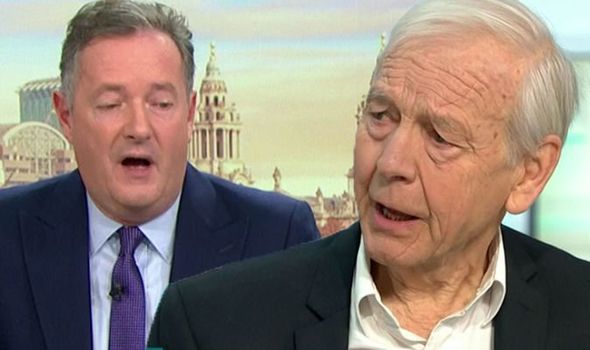 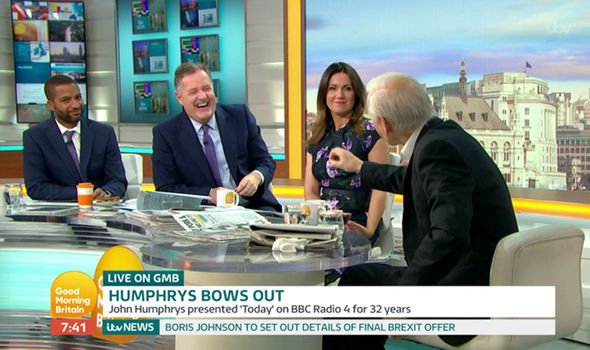 Airing his views on such a pinnacle for BBC Radio 4’s flagship programme, Mr Humphrys began: “At 7.30, they will do the hard interview, usually, and then you’ll have a softer take on that hard interview and then another hard interview in-between that comes that rather pointless Thought of the Day.”

After the former host admitted he thought the segment was “pointless”, Piers laughed nervously as Susanna wanted greater explanation on the comment.

“You don’t think Thought for the Day should be on the Today Programme anymore?” Susanna enquired, to which the veteran broadcaster admitted it isn’t sold as a religious segment, before going on to offer his thoughts on what Piers would be like if he presented it.

After the Good Morning Britain star admitted he was a Catholic, the guest replied: “Here we have a situation where Piers would be allowed to do Thought for the Day because he can approach it from a christian perspective.” 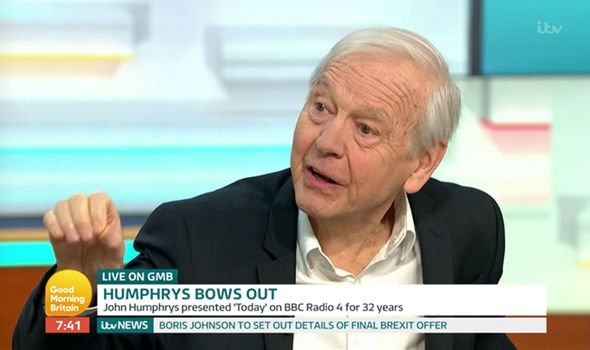 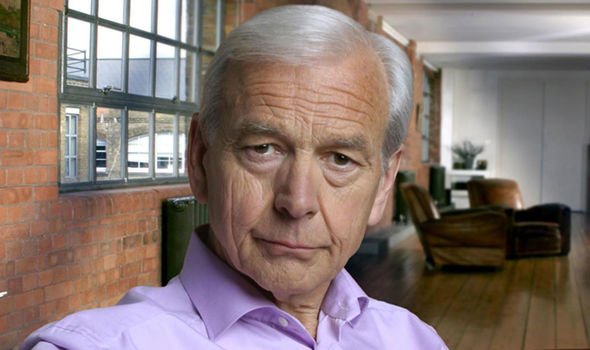 I could not do it

“I could not do it. I do not believe in any…” Mr Humphrys continued, before Piers said: “How interesting.”

Concluding the talk on the subject, the broadcaster added: “I would say it’s discriminatory,” after admitting he thought the segment should be scrapped.

“Why shouldn’t I as somebody who – I regard myself as being a fair middle of the road kind of bloke but I feel quite strongly about certain things and I would love to express my opinion about certain things – not allowed to because I cannot approach it from a religious perspective.”

During his 32 year career as host of the Today Programme, Mr Humphrys has interviewed a plethora of guests, including senior members of Parliament.

One of his most infamous interviews with the leader of the country was with the late Margaret Thatcher, who he spoke to on the phone from 10 Downing Street.

Mr Humphrys announced his departure from the Today Programme on BBC Radio 4’s The World at One earlier this year.

“I love doing the programme, I have always enjoyed it, always loved it.

“When you do this programme it dominates your life, not just because you have to get up in the morning so many days a week, but all the time, you have to be obsessed – I think that is the right word – with what’s going on out there.

Following Mr Humphrys’ departure from his role, not one, but four presenters will be taking over from the veteran broadcaster.

Justin Webb, 58, Mishal Husain, 46, Martha Kearney, 61, and Nick Robinson, 55, will be hosting the Today Programme for the foreseeable future.