Anthony Mackie Reveals the Biggest Difference of His Captain America

Ahead of The Falcon and the Winter Soldier‘s premiere, Anthony Mackie admitted he was scared of being the star of the first Marvel project that sucks and having to do TV commercials for the rest of his career. “Hey, you never know, man. You never know!” Mackie exclaims now. “I was very concerned about the idea of being the first bombing Marvel franchise.”

The series — Marvel Studio’s second release following the zeitgeist-defining WandaVision — premiered as Disney+’s biggest debut yet, and Mackie can breathe a sigh of relief, if only based on the reaction in his own home. “I watched all the episodes with my sons and their reactions were so funny,” he tells ET’s Nichelle Turner. “I became an audience member and was able to let go of it and watch it with them. I had never had the experience of just sitting back and enjoying it as a parent instead of an actor in the show.”

Over six episodes, Falcon and Winter Soldier saw Mackie’s Sam Wilson grappling with assuming the mantle of Captain America as a Black man living in America. The finale episode, “One World, One People,” saw Sam finally take up the shield and don a star-spangled suit as the MCU’s new Captain America.

“My little ones are looking at the screen and they’re like, ‘Dad, that guy looks just like you.’ I’m like, ‘I know,'” Mackie says. “The 5-year-old goes, ‘He sounds like you too.’ The older two are like, ‘I can’t believe these dudes aren’t getting it.’ But they can’t put together that I’m on TV and on the couch at the same time. So, the little one goes, ‘You know, dad, you could be Captain America'” I was like, ‘Thanks, man. I appreciate it.’ And then they just walk off and go play with their Legos.” 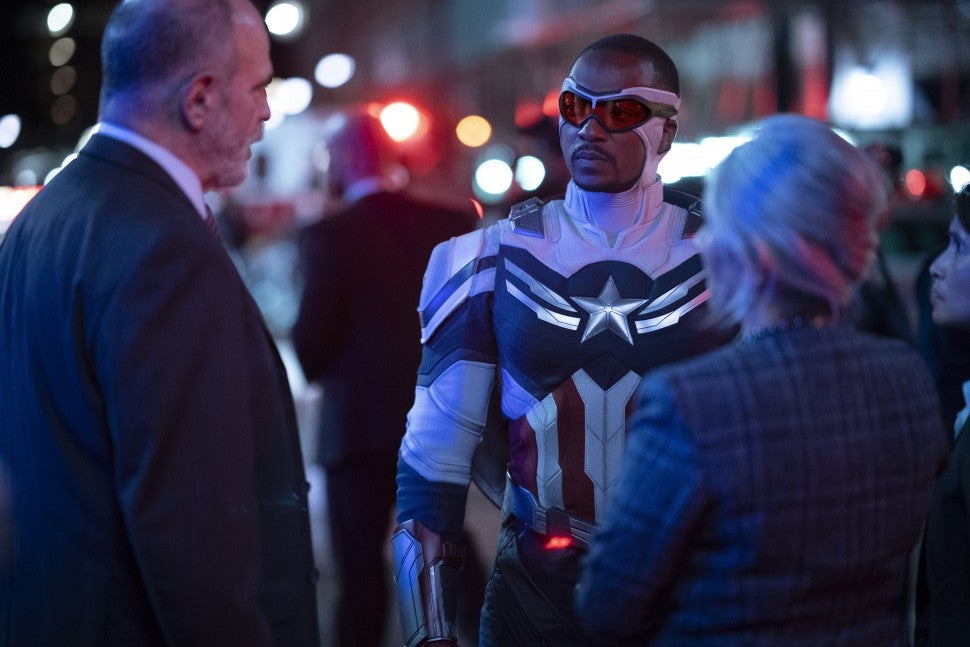 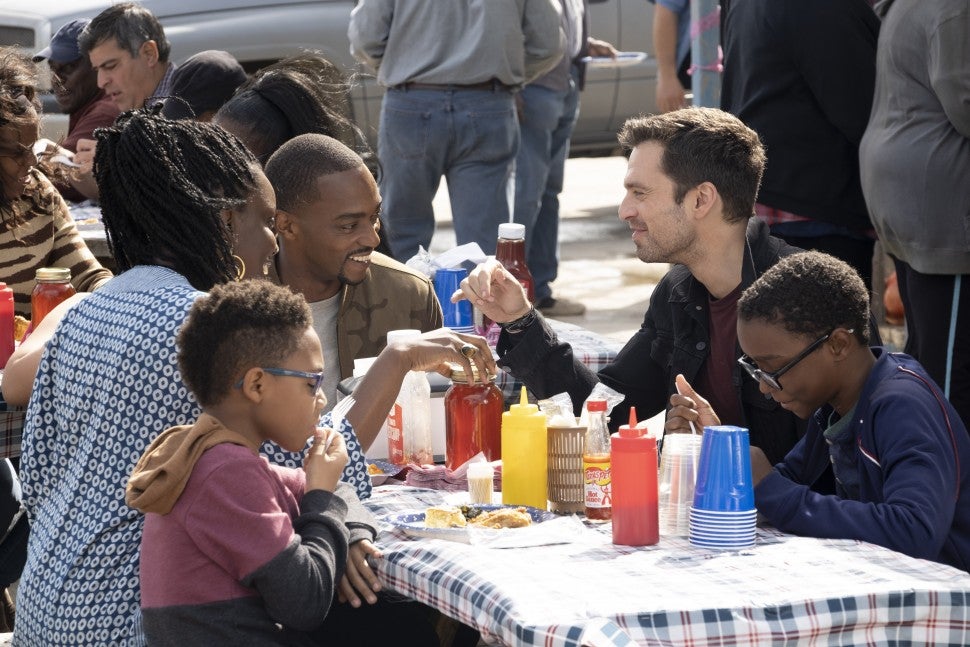 Counting John Walker’s doomed tenure, Mackie is now the third player in Marvel’s cinematic universe to take on the title of Captain America. Yet his will be closest compared to Chris Evans’ Steve Rogers, who served as Cap through Avengers: Endgame. “What Chris was able to do with that character was bring a level of strength and confidence to him,” Mackie says. “He really brought even-keeled, well-rounded, three-dimensional character.”

“Sam Wilson, because he was a counselor of vets, because of his background with his family, and a lot of people don’t realize Sam Wilson is the only superhero who has no superpowers — he’s just a regular guy who went for a jog and became an Avenger — he comes from a place of humanity and humility,” he continues. “I feel like I’ll bring the human aspect instead of the super aspect. He’s still got them hands though, but he’s not a superhero. He’s a regular guy.”

As for any meeting the “America’s Ass” portion of the brief, Mackie laughs. “Well, I would say I’m more of a beefier guy than Chris,” he says. “He’s compact. I’m more robust. So, I think people won’t be disappointed with the round Brown, how could they be.”

The idea of us being a duo, it ain’t that bad of a thing.

The Falcon and the Winter Soldier finale ends with an updated title card, one which acknowledges Sam’s new moniker: Captain America and the Winter Soldier. What this means for the character’s future remains to be seen. Despite reports that Mackie will front his own Captain America movie, to be scripted be series head writer Malcolm Spellman and Dalan Musson, the actor claims he has yet to hear anything.

“Nobody called. I’m like, ‘My phone works, dawg! I pay my bill every month!’ So, I don’t know what’s going on,” Mackie responds. “They always have some kind of plan. But there’s, like, 30 million projects in production right now, so I just wait for the phone call from Kevin [Feige] and Nate [Moore] to tell me what I’m doing.”

Whether it’s on the big screen in Captain America 4 or in a second season of the series — whatever it would be titled — Mackie is hopeful the next outing will still see him teamed up with Sebastian Stan’s Bucky Barnes.

“Sebastian is one of my dear friends. I think it’s obvious that we work extremely well together. So, the idea of us being a duo, it ain’t that bad of a thing,” Mackie says. “You get the glaze and you get the chocolate glaze, you know? Everybody gets the donut they want. So, I think we’ll all be happy with that.”

All episodes of The Falcon and the Winter Soldier are now streaming on Disney+.