Some artists rely on dazzling virtuosity to woo their audience. But Ukrainian-Israeli violinist Vadim Gluzman placed sentiment above spectacle at the latest of MRC’s Great Performers recitals. 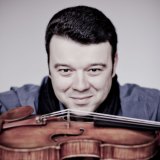 This thoughtfully poised approached was at times a gamble, but largely paid off, if not entirely. The first half mused on the eternal genius of JS Bach and the way his music has resonated through the centuries.

Opening the evening was the Australian premiere of a work written for Gluzman in 2007 by Russian-born, American-based composer Lera Auerbach. Using a range of vibrantly coloured techniques to refract the Baroque sound-world through a distinctly 21st-century lens, par.ti.ta showcased every facet of Gluzman’s powers: the deftness of his touch, the focus of his intentions, the intelligence behind his musicality.

Next was Bach’s D minor Partita presented in its arranged guise with piano accompaniment by Robert Schumann – another example of Bach’s power to inspire. While executed with mutual sensitivity alongside Australian pianist Daniel de Borah, this realisation didn’t quite live up to the programming’s poetic logic, Schumann’s efforts proving unnecessary and often intrusive on this already perfect music.

Following a blissfully eloquent rendering of Arvo Part’s minimalist masterpiece Spiegel im Spiegel, the partnership between Gluzman and de Borah had a final opportunity to prove its worth in Beethoven’s Kreutzer sonata, and to say this was an unqualified success would be an understatement.

The clarity and nimble brightness underpinning the rest of the evening was very much present, but now anchored to a less guarded volatility, ideally suited to the emotional brawn of middle-period Beethoven.