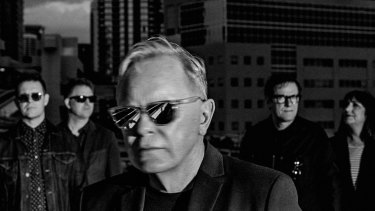 New Order’s new live album is the next best thing to being there.Credit:Warren Jackson.

Nearly 30 years after Joy Division made their TV debut in Manchester's Old Granada Studios, the group that rose from that band's ashes, New Order, returned to the same venue in 2017 to play a series of shows.

Drawing extensively from their back catalogue, including Joy Division songs that hadn't been played live in over 30 years (the timeless Disorder and Ultraviolence from Unknown Pleasures), the gigs delighted fans and are reproduced here in the format of the full concert, plus three bonus tracks, in a bumper 18-track release.

While we might miss out on the image of a "responsive" stage set that was built for the occasion by visual artist Liam Gillick, it is a testament to the potency of these shows that the thrill is still visceral, augmented by a 12-piece synthesiser orchestra from the Royal Northern College of Music and the whoops of the crowd.

It is enough to induce major FOMO, but the next best thing to being there is still really great. Favourites are hard to pick, but (other than the Joy Division material) Sub-Culture from 1985's Low-Life is positively electric and the guitar lines on Guilt Is a Useless Emotion glint like diamonds. Annabel Ross

His name may be unfamiliar, but his playing is unforgettable. A local treasure, Elsen Price is a double bassist who ranges across classical, avant-garde, jazz, Middle Eastern, free improvisation and more, and is utterly convincing in every context. He also uses real-time looping and extended techniques to create strata of bowed and pizzicato bass for spellbinding solo concert performances, and it is these Price has massaged into a suite for this album.

His level of virtuosity has few peers in this country, but two other aspects of his work are yet more important: his starburst imagination (as both composer and improviser) and his sound. The latter's opulent warmth ensures that however complex, busy and labyrinthine the music may become, Price can stop your heart with a single note (executed with perfect intonation). And because he has been active across so many areas (and no doubt listens and experiments more widely still), the music interweaves multitudinous concepts (scalar, harmonic, rhythmic, textural) that make for endless surprises in where he takes his melodically luxuriant seven-part suite on this digital-only release. Exhilarating. John Shand

Kyle Craft's first two albums saw the Portland singer-songwriter widely compared with Ryan Adams in his mid-2000s pomp – something, given Adams' recent fall from grace, Craft might now be keen to play down.

With Showboat Honey he appears to have moulded a sound more distinctly his own, even if he does continue to wear his many influences brightly on his sleeve. The album begins and ends with outrageously good tracks: the simmering Broken Mirror Pose and the more raucous and extravagant She's Lily Riptide, both of which have echoes of Exile-era Rolling Stones.

In between, Craft varies the tempo and the mood, but a fusion persists between the theatrical gusto of glam rock at its best and elements of country and blues. This, in combination with Craft's screeching voice, makes the album sound at times like a kind of honky-tonk Jane's Addiction, with Deathwish Blue an example of gloriously over-the-top rock bombast that, impressively, avoids being too silly.

The more sedate songs, like Bed of Needles #2, display nuance and sensitivity, providing a welcome change of pace on what is his best record to date by far. Barnaby Smith

There's something inexplicably satisfying about Mongolian throat singing. Vocalists begin with a fundamental drone, and then double or even triple their voices over it, producing frequencies that evoke natural sounds like wind and water and yet are abstract enough for listeners to lose themselves in them.

The strongest tracks on this local band's second album highlight the throat singing of Bukhu Ganburged, who also plays the morin khuur (horsehead fiddle), Mongolia's national instrument. The sparse, haunting Huurhun Haliun is the most traditional-sounding piece, while on Sixty White Horsemen Bukhu performs against a kind of art rock backdrop.

The rollicking, trippy Tricky-Hudaida has Celtic and bluegrass elements, while Shifting Sands takes a jazz detour. If the destination is uncertain, the meandering journey is certainly gratifying. Eugene Ulman

It has long been an orthodoxy that second albums are more problematic than debut offerings. Here's the exception. If Big Merino's debut, Suburban Wildlife, was scattergun in its approach, this is a tour de force of, for want of a better term, classy adult rock, funk, soul and pop. It's the kind of music Jo Camilleri and Van Morrison see as their bailiwick: a clever and sophisticated blend of heart-stopping gospel-style harmonies (I Watched the Light), and classy lead vocals (courtesy of Stuart Davis, a long-time member of Sydney-based choral masters Cafe of the Gate of Salvation).

Instrumental features include beautiful interplay between acoustic and electric guitar (the title track is seductive); searing guitar solos from Alex Craig (I Lay Me Down); delicious horns courtesy of James Greening (Satellite) and some pulsating funkiness on This Song and Living in the Past.

Oh, yes, and there is an astonishingly good reading (with blistering guitar solos) of Neil Young's Ohio. The result is a deeply satisfying collection of songs which, while they defy any easy categorisation, sit happily at the richly mature end of popular music. Hear them at Marrickville Bowling Club, July 27. Bruce Elder

Blood Orange (aka Dev Hynes) cut his teeth writing songs for pop stars, but the UK native has always preferred telling his own stories. The latest project from the cult hero is, in typical fashion, a lineup of introspective tunes that blur the line between dancehall, r&b, shoegaze and pop.

The problem Hynes may have is listener fatigue, considering the release of his last album, Negro Swan, came just 11 months ago. He attempts to counter this with a slew of guest features, including from Kelsey Lu, Justine Skye, Arca, and Tinashe – a stark contrast to the A-list on his previous record.

Instead, we're presented with a mercurial gush of ideas that only really succeeds three times: opener I Wanna C U, the Toro Y Moi-assisted Dark & Handsome and Birmingham. The back end of the record feels muddled and lacking direction, except for Happiness, which is a tangle of bright threads emanating genuine joy.

It's clear from this mix-tape that Hynes is bursting with concepts, but in a rare misstep he lacks the finesse that's usually found on a Blood Orange record. Perhaps this is a list of B-sides after all; tracks that were better left on the cutting room floor. Kish Lal