The ‘Industry Baby’ hitmaker gets an offer to work together with ‘The Scotts’ rapper after the former got candid why there weren’t any black male music stars on his debut album ‘Montero’.

AceShowbiz -Rapper Lil Nas X has teased his upcoming collaboration with Kid Cudi, promising it will be “amazing.”

At last week’s (September 12) 2021 MTV Video Music Awards in New York City, the “Industry Baby” star gave a preview of what to expect when he teams up with “The Scotts” rapper.

“Me and Kid Cudi on a song humming, singing, dancing and frolicking together would be amazing,” Nas told Billboard on the red carpet, referencing the Ohio rapper’s Twitter offer to work together.

Earlier this month, the “Call Me By Your Name” hitmaker explained to fans why there weren’t any black male music stars on his debut album “Montero”, which dropped on Friday, September 17.

“Maybe a lot of them just don’t wanna work with me,” he mused on Twitter, acknowledging some of the backlash and homophobic comments he’s received from other black male rappers.

His tweet caught the attention of Kid Cudi, who said he was more than game to make a plan for a collaboration. 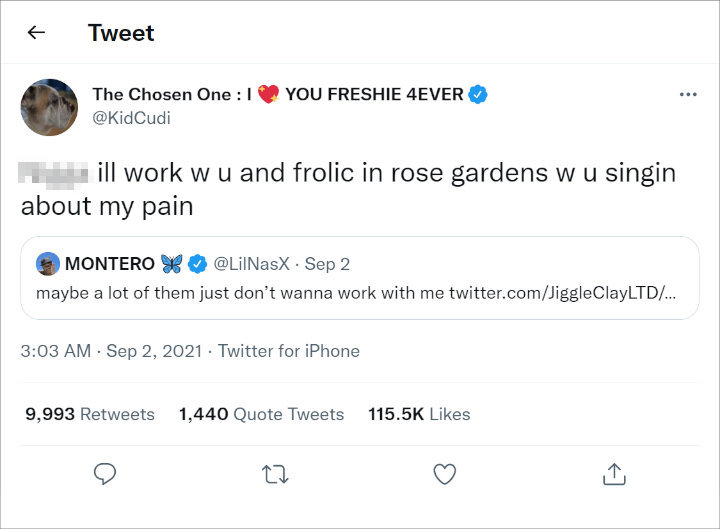 Cudi also sung praises for Nas X in a piece for Time’s “100 Most Influential People”. He wrote, “Lil Nas X is a new twist on some of the themes I was riding on when I first started out: being true to yourself and not giving a f**k what anyone says. What he’s doing is what we need right now.”

“To have a gay man in hip-hop doing his thing, crushing records — that is huge for us and for Black excellence. The way he’s unafraid to make people uncomfortable is so rock ‘n’ roll. He’s a true rock star,” the “Just What I Am” MC continued.

Lil Nas X hopes to feature his and Cudi’s upcoming song on a future deluxe edition of “Montero”.