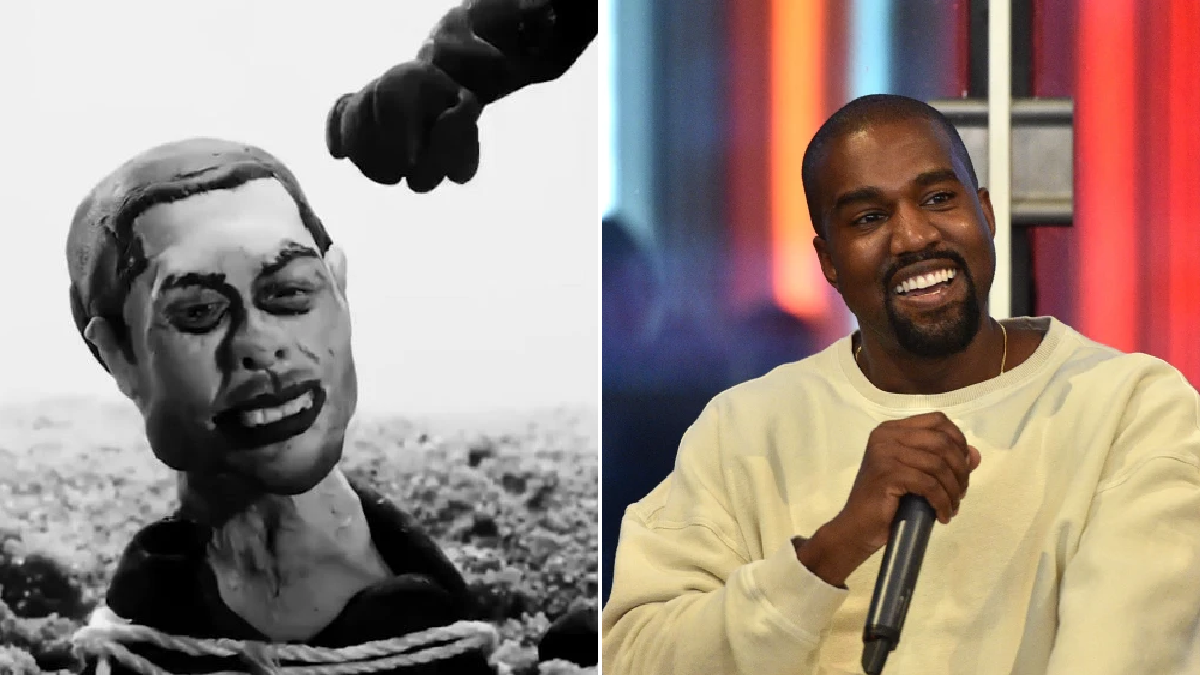 Kanye West is facing fresh backlash after disturbing scenes in his new music video where Pete Davidson is buried alive.

The Jesus Walks rapper released the black and white visuals for his single Eazy featuring The Game, which has been lifted off his new album Donda 2.

One scene in the dark video features an animation of Saturday Night Live comedian Pete being buried by Kanye.

‘God saved me from the crash, just so I can beat Pete Davidson’s ass,’ Kanye is heard rapping as the accompanying video shows him, as a cartoon, dragging what appears to be a restrained Pete with a bag over his head.

The rapper then removes the bag from Pete, whose body is in the ground, and sprinkles seeds over his head.

Many have deemed the visuals to be inappropriate while criticising Kanye, 44, for his repeated public digs at Pete, 28, who is dating the musician’s ex-wife Kim Kardashian. Perhaps coincidentally, the video was released hours after a judge agreed Kim could be declared legally single as their divorce proceedings trudge on.

Reacting to the scenes, one viewer tweeted: ‘Kanye West decapitating Pete Davidson in his new music video is absolutely disgusting and pathetic. The man’s 44 and having a completely one-sided feud with this guy to this extreme, it’s vile and so uncomfortable to witness unfold. He needs to be de-platformed like Trump.’

Another pointed out the fact Pete also struggles with mental health issues, commenting: ‘Can’t make the “kanye is sick” excuse. so am i, so is pete davidson. pete davidson and i are on medication to help us, and we take accountability for our actions. don’t demonize mental illness by letting it excuse the way he’s acting.’

Kanye is himself diagnosed with bipolar, and his own mental health battle has been well-documented.

Another commentator weighed in: ‘It breaks my heart to think of pete rn bc like nick cannon said days ago, pete davidson is such a delicate and loving person. what kanye’s doing is so disgusting and immature.’

One added: ‘Pete literally has spoken about having BPD and being suicidal, does Kanye not have a team that needs to approve this s**t? They’re literally exploiting one mentally ill man (Kanye) to upset another (Pete) all for some clout.’

However, there were a few fans in Kanye’s corner as one defended the star tweeting: ‘Eminem has a whole music video out depicting domestic kidnapping & a murder-suicide with real humans acting it out & he just performed at the super bowl but god forbid Kanye uses clay figures depicting planting Pete in the dirt with some flowers.’

One other agreed: ‘People losing their minds over a music video are the same people who say “Pete’s SNL monologue on Kanye was just comedy and not that big of a deal”.’

Pete had been the subject of some of Kanye’s Instagram rants in recent weeks, with the Gold Digger rapper branding the comic a ‘d***head’ and saying he would never allow him to meet the four children he shares with Kim. Kanye now typically refers to Pete by a new nickname, Skete.

Kim, 41, filed for divorce from Kanye in February 2021 after six years of marriage.

On Thursday, the reality TV star won a request to change her name from Kardashian-West back to just Kardashian after a motion was granted by a judge at Los Angeles County Superior Court.