Justin Timberlake is giving a shout to the creator of his famous “It’s Gonna Be May” meme.

Every year, just before the month of May approaches, the internet goes wild by posting videos and memes of the former *NSYNC star pronouncing “me” in “It’s Gonna Be Me.” And this year, Timberlake, 40, took a moment to “give props” to Kianna Davis, the woman who started it all.

“Now that it’s ACTUALLY May, I have to give props where they are due. Look what you started @astro_kianna,” Timberlake wrote on social media on Saturday, alongside a photo of Davis holding up a calendar and his meme at the end of the month of April. 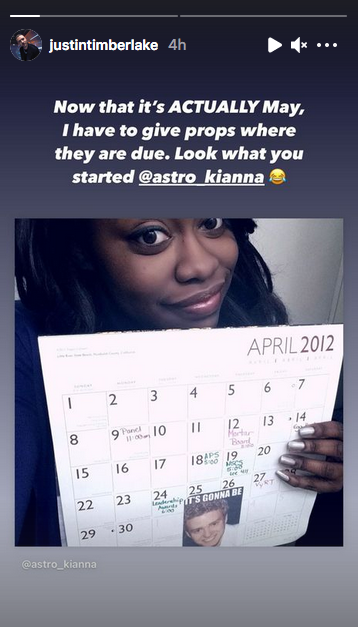 Davis resposted the former boy band member’s Instagram Story, adding, “Can’t believe this. I’ll never forget it.” She also couldn’t help but apologize to Timberlake, adding, “But dude I’m so sorry that you have to see this every year. Love you always.” 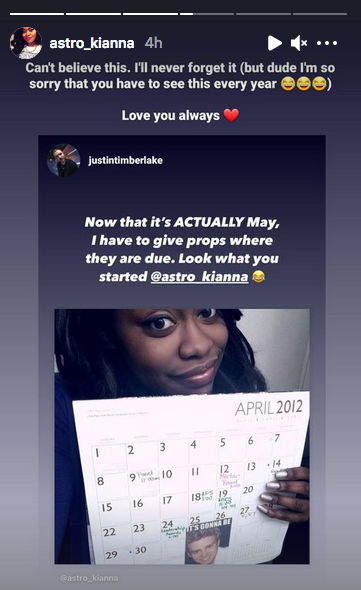 Last year, as the lockdowns amid the pandemic began to take place, Timberlake shared a clip of Lizzo singing along to the song. In the caption, he urged people to stay inside.

“When’s the next time we leaving the house, @lizzobeeating??” Timberlake captioned the video, with the implied answer of “it’s gonna be May.”

Davis recently talked about creating the now viral joke, telling NewsNation Now, “I was still in college, I didn’t think anything of it other than posting a joke for my NSYNC friends. I never in my life imagined it would become this.”

*NSYNC released their album No Strings Attached in 2000 and ET was behind the scenes with Timberlake, JC Chasez, Lance Bass, Joey Fatone and Chris Kirkpatrick while filming their second single, “It’s Gonna Be Me.”

The boy band transformed into animated plastic doll versions of themselves.

“It was a lot of fun,” a 19-year-old JT told ET on the set, adding, “We were in makeup for like four hours. It’s worth it though. It’s going to come out good on camera.”

See more of ET’s time on set with *NSYNC in the video above.