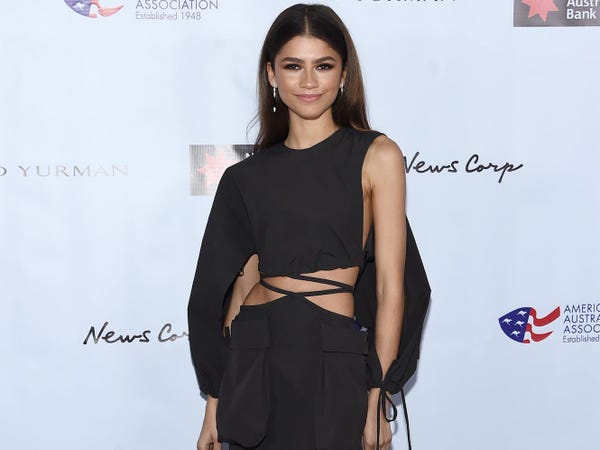 Some red-carpet events might be virtual this year, but stars like Zendaya aren't letting that get in the way of fashion.

On Sunday, the "Euphoria" actress attended the virtual Green Carpet Fashion Awards, which celebrate sustainability, to receive the Visionary Award for her work promoting diversity and inclusion throughout her career, as reported by Vogue.

For the event, she wore a vintage Versace dress from the brand's fall 1996 collection, according to an Instagram post from her stylist Law Roach. The ankle-length gown was brown, sleeveless, and had a sparkling, semi-sheer bodice.

I think she’s the prettiest girl in the world…. @zendaya for the Green Carpet Fashion Awards wearing @bulgari and Archive @versace from Fall 1996 collection… the same year she was born!!! Oh hey @darnellappling

The 24-year-old Versace dress — which is as old as Zendaya — looks slightly different today than it did in 1996. Archive photos from Vogue show the gown originally being modeled by Anna Klevhag. Its skirt in particular seemed to reach the floor at the time, and was more form-fitting than flowing.

The winner of the GCFA Visionary Award at #GCFAItalia 💚 @zendaya said in her speech :“ […] I am so excited for the future of this industry and all the beautiful things we have yet still to accomplish! “. The winner of this year’s edition not only has long been leading the charge to increase both inclusivity and diversity in fashion, but she has persevered in how she can personally make a difference in the industry, using her platform as an actress and as a creative, to open doors and give a voice to those who otherwise would not be able to showcase their talent. great leaders, for a great future for the industry of fashion! #GCFAItalia ♻️🌱🇮🇹👗 @ecoage @italymfa @itatradeagency

Zendaya and Roach have previously collaborated on numerous red-carpet looks. Most recently, the pair worked together for the 2020 Emmys.

Representatives for Law Roach did not immediately respond to Insider's request for comment.