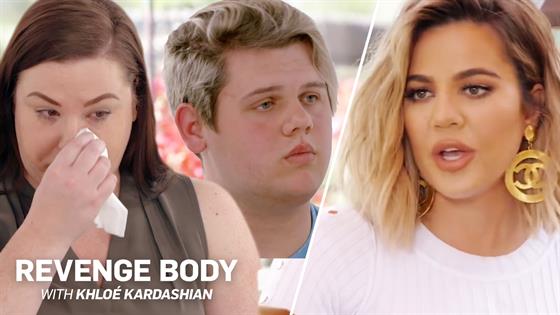 In fact, the participants of Revenge Body With Khloe Kardashian certainly know this to be true. As we gear up for the season 3 premiere, we thought it’d be nice to take a closer look at Kardashian’s wise words.

Not only has the Keeping Up With the Kardashians veteran given her contestants an open ear, but she’s also dished out some necessary tough love. For example, after one participant struggled to adapt to a meal plan, Khloe reminded her that this wasn’t the time for excuses.

“I know this process is a lot of purging emotionally and everything,” True Thompson‘s mom relayed in the video compilation above. “But I also know sometimes we tend to make excuses for ourselves…With all due respect, you’re half-assing it.”

This wasn’t the first time that Khloe got candid with a contestant. After one woman revealed that her boyfriend was unfaithful and made her feel not “skinny enough,” the Good American boss sounded off on the cheating beau.

“You know, it’s him. He has f–king problems,” Khloe wisely stated. “It has nothing to do with you. I want you to be like, ‘F–k you! I’m strong. I don’t need you and I can’t believe that I even let you do what you did.'”

Furthermore, Khloe assured the woman that working out helped her change the way she looked at situations.

For these wise words and more, be sure to watch Khloe’s best pep talks above. Oh, and for new Kardashian words of wisdom tune in to Revenge Body‘s premiere on Sunday, July 7 at 9 p.m.

Watch the season 3 premiere of Revenge Body With Khloe Kardashian Sunday, July 7 at 9 p.m., only on E!