Woman, 75, reveals how she was abused by her BROTHER

Woman reveals how her brother, 24, sexually abused her from the age of 12 and asked her to ‘live as his WIFE’ – but still returned to see him 50 years later on his deathbed and organised his funeral

A pensioner has revealed how she was sexually abused by her older brother for years – but still returned to see him years later on his deathbed.

Christine Temlett, 75, from Plymouth, said her sibling Tim began abusing her shortly after their mother suffered a stroke when she was 12-years-old and he was 24.

But after he began suggesting they ‘live together as husband and wife’, she told her brother Sam about the abuse, and she was taken into foster care and didn’t hear from her family again, while her father pleaded for Tim to return home to look after his mother.

Fifty years later, she learned her brother Tim was dying in hospital following a stroke and decided to visit him, revealing: ‘It seemed surreal how I’d once hated him yet now as I sat with him, as he lay on his deathbed, I somehow felt sorry for the man that had abused me.’

Christine’s family are now all deceased and she is sharing her story for the first time in her memoir, An Innocent Girl. 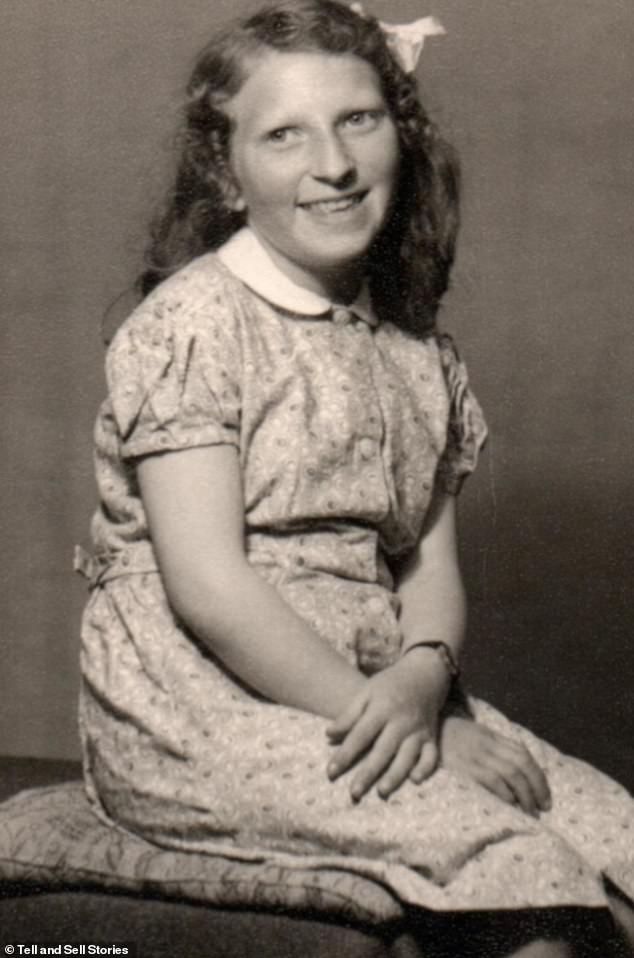 Christine Temlett, 75, from Plymouth, has revealed how she was sexually abused by her older brother for years – but still returned to see him years later on his deathbed (pictured, at the year before the abuse started at the age of 11) 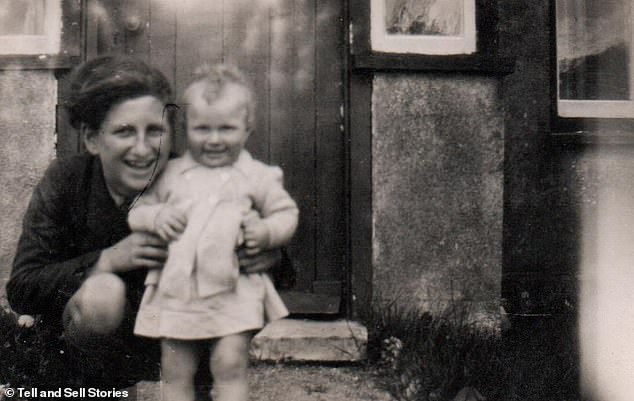 Christine said her sibling Tim began abusing her shortly after their mother suffered a stroke when she was 12 years-old and he was 24 (pictured, together)

Christine was 12-years-old when, in 1958, her mother suffered a second stroke.

She said she had been ‘skipping home from school’ when she stepped through her front door and her father revealed the news.

She explained: ‘My stomach lurched and I ran up to see her in bed. She looked so weak and was non-responsive.’

Christine said she ‘leaned over to kiss her forehead’ and ‘told her I loved her.’ 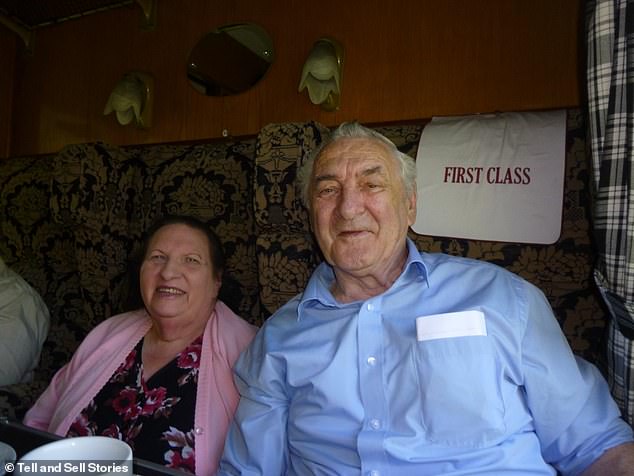 Her father sent Christine to stay with her aunt Alice, even though she wanted to stay in London with her parents and brothers Sam and Tim.

She said her ‘wish came true weeks later’ when she returned home to be with the family.

Christine explained: ‘I loved being back and when Mum wasn’t asleep, I sat at her bedside.’

1959-1963 – Christine is abused by her brother Tim, before confiding in her other brother Sam

1965 – Christine marries Andy and they welcome two daughters, Susie and Angela, who has spina bifida

Christine visits him in hospital and helps him sort through his house, stocks his cupboards with food.

Christine visits him again and he asks her to organise his funeral.

However soon she began to notice a change in her brother Tim’s behaviour, saying: ‘Tim started being nasty to me for no reason, so I felt uneasy when Dad put him in charge of caring for me.’

She explained: ‘One day, when Dad and Sam were out, I asked Tim to help me wash my hair.

‘Tim lathered shampoo into my hair like he always did, but suddenly he pressed himself up against me.’

Christine said he ‘ordered’ her to ‘go upstairs and get dressed’, and when she told him she didn’t want to, he told her: ‘”If you don’t, I’ll kill you and our mother. Is that what you want?”

She explained he then ‘hit’ and ‘pushed’ her up the stairs, saying: ‘My legs trembled. Knowing Mum was so close but confined to her bed was agonising.’

She continued: ‘I undressed then Tim touched me. My heart was beating so hard, I thought it might rip through my chest.’

Afterwards, while she was left alone in bed sobbing, Tim told her: ‘I’ll kill the whole family if you tell anyone.’

She explained: ‘I wished desperately Mum was healthy enough to protect me.’

As her mother’s health deteriorated, Tim continued to abuse her, until he told her: ‘”I’ve been thinking about things. If Mother dies, we could live together as husband and wife”.’

Christine was shocked by the assertion, saying: ‘I stayed silent but inside I was screaming. I have to escape, I thought.’

She went on to confide in her other brother, Sam, and said she ‘blurted it out’, revealing: ‘One day, I was alone with Sam in his van.

“I’m having problems with Tim. He’s making me get undressed.”

He was stunned, immediately pulled over on the side of the road, and asked how long the abuse had been going on for.

Meanwhile Christine also revealed she was ‘afraid’ to speak out about Tim’s actions, telling Sam: ‘Tim said he’d kill Mum and me.’

Sam gave her a hug and drove to the police station.

After giving a statement, she was taken into social services’ care before attending a family court.

TIm claimed that she’d agreed to what happened, and Christine’s brother and father took his side.

Christine’s father pleaded for Tim to return home to look after their mother and no charges were brought.

It was decided that she’d be placed in the care of Cornwall County Council and she was sent to a girls’ home in Plymouth.

She explained: ‘Though I missed Mum, Sam and Dad, I was glad to escape Tim’s clutches.’

Christine said the sexual abuse began weeks after her mother suffered a second stroke (pictured, Christine with her parents)

She made friends at the home and began dating a ‘friendly and easy-going’ man called Andy, whom she met on a night out.

She revealed: ‘I took him to meet Mum, who was now in a care home. On seeing him, she beamed a lovely smile.

‘Afterwards, Andy said: “I feel sure she was asking me to take care of you with that smile.”

Weeks later, Christine learnt her mother had passed away, explaining: ‘It felt as if the bottom of my world had dropped out and I thought about her every single day.’ 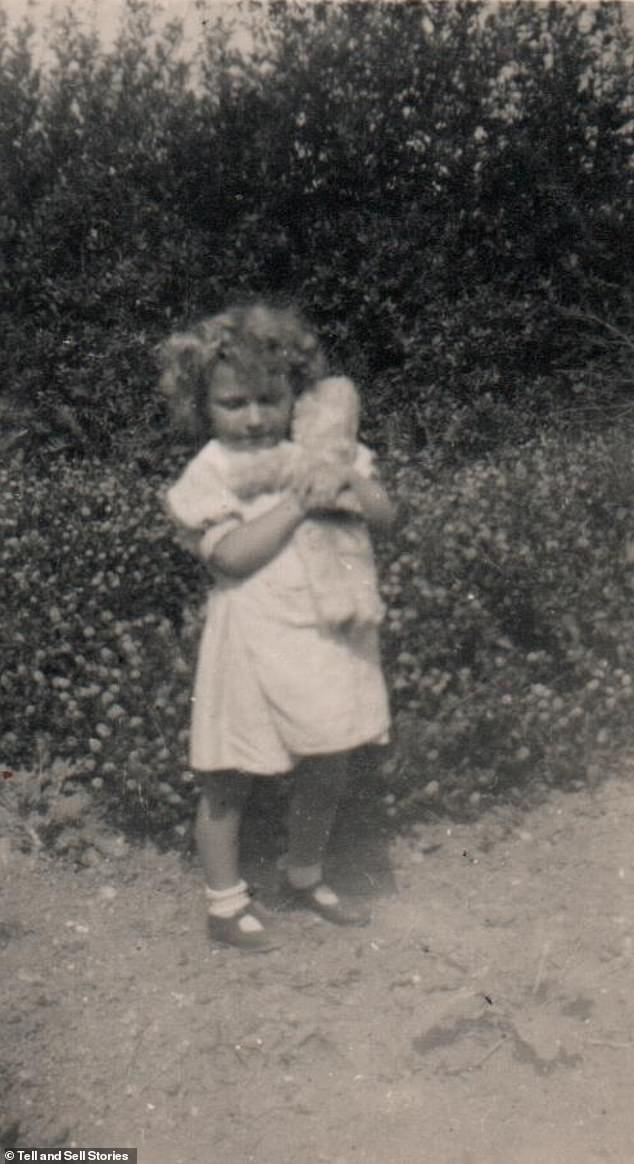 When she turned 18, she was released from care and, the following year in July 1965, she married Andy.

She said the sun had been ‘shining down’ on the ‘happiest day of her life.’

The couple went on to welcome two daughters, Angela and Susie.

In 1980, she was left devastated when her father passed away and, seven years later, her daughter Angela, who’d been born with Spina Bifida, died of renal failure aged 21. 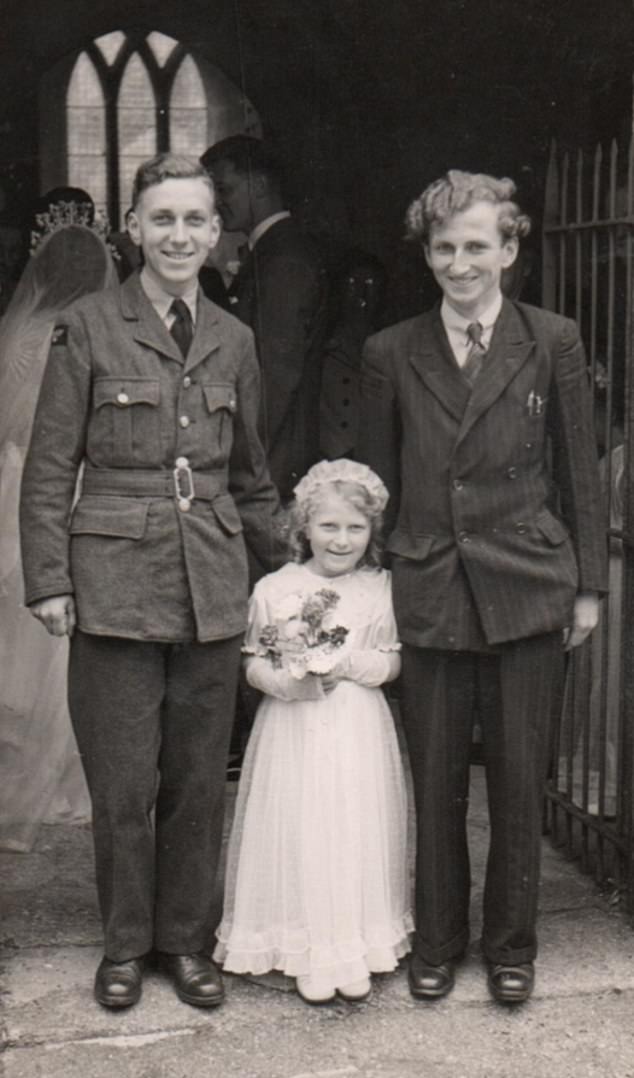 After Tim (right) suggested they start living ‘like husband and wife’, Christine told her brother Sam of the abuse (left)

She said: ‘I was absolutely bereft. I mourned for her, but I knew I couldn’t sit around feeling sorry for myself forever.

‘I had a strong desire to help others who needed somewhere safe to live.’

Two years later, Andy and Christine started fostering, with Christine explaining: ‘We had planned to foster girls, but boys were harder to place so we were persuaded to take them instead.

‘Susie, then 11, loved having foster brothers, and Andy and I found it so rewarding to help youngsters enjoy life.’ 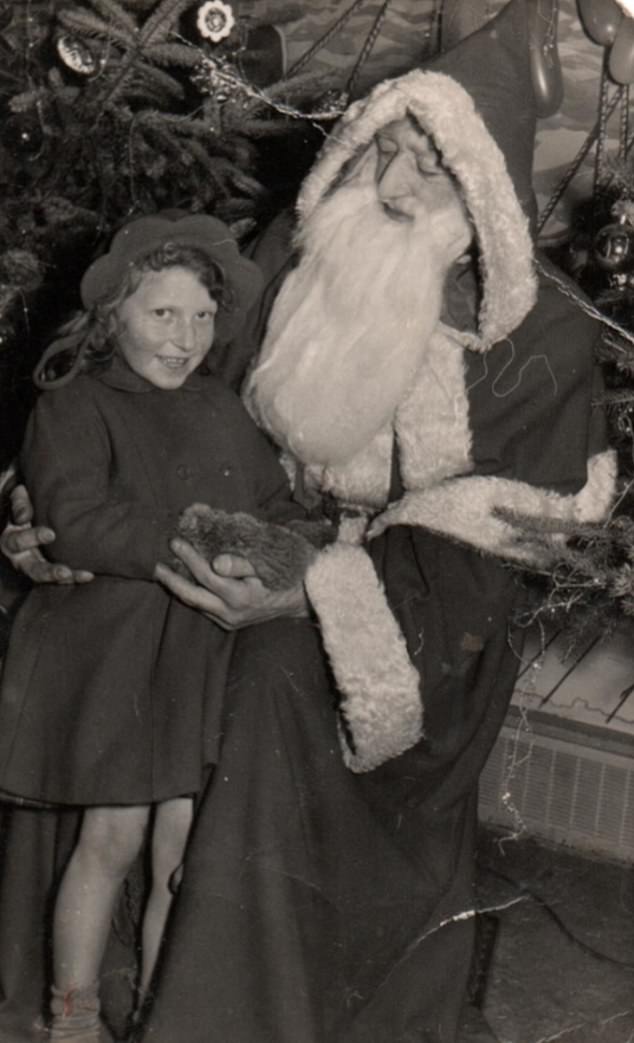 After Sam helped her to report Tim’s actions to the police, Christine was taken into foster care (pictured, as a child)

In October 2000, she got the sad news that Sam had died, and then, in 2004, she received a call from a care worker revealing her brother Tim had suffered a stroke at the age of 71.

She recalled being told: ‘”Your brother Tim’s had a stroke. We can’t let him go home because his house is in such a state.”

Christine and Andy went to see Tim, and she revealed: ‘He seemed to have physically shrunk.

‘Looking weak and completely helpless, I realised he was no longer a threat.’ 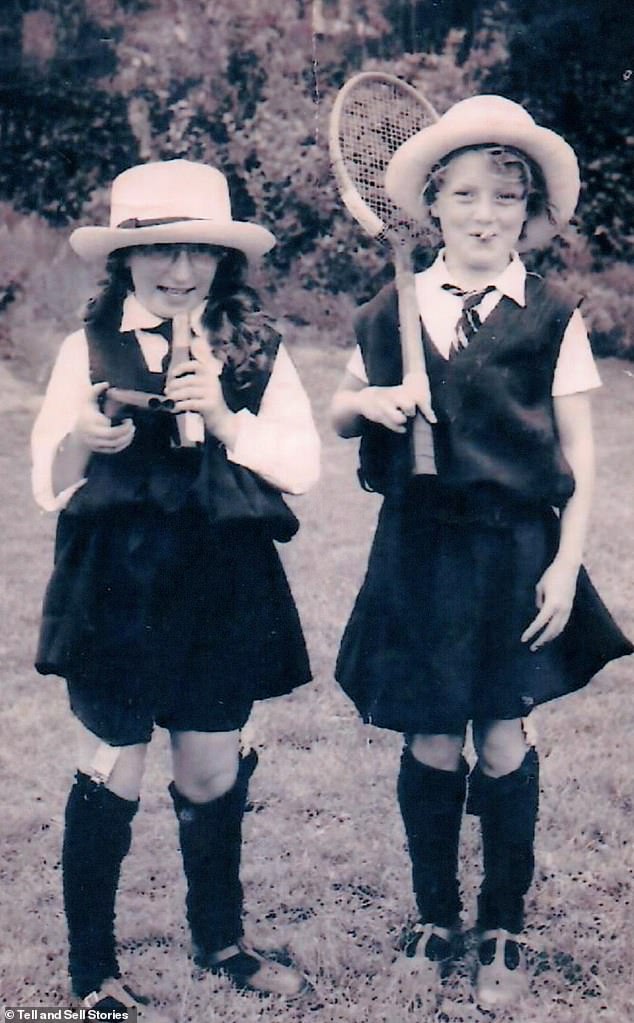 He told Christine he didn’t want to move into a care home, and begged her for help.

She said: ‘Tears filled my eyes and compassion overwhelmed me. I thought of the time he’d looked after Mum when she’d had her stroke.

The couple cleared out Tim’s house, which had been piled high with rubbish, and stocked the cupboards with food for Tim on his return. 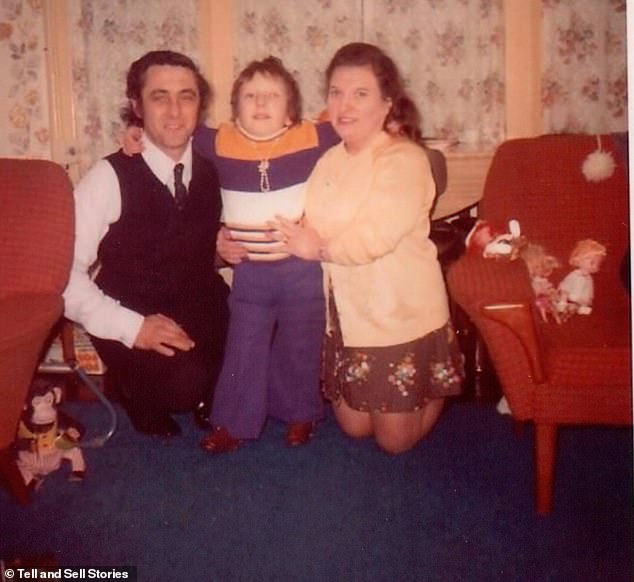 After meeting her husband Andy as a teenager, the couple married when Christine was 19-years-old and welcomed two daughters (pictured with their daughter Angela) 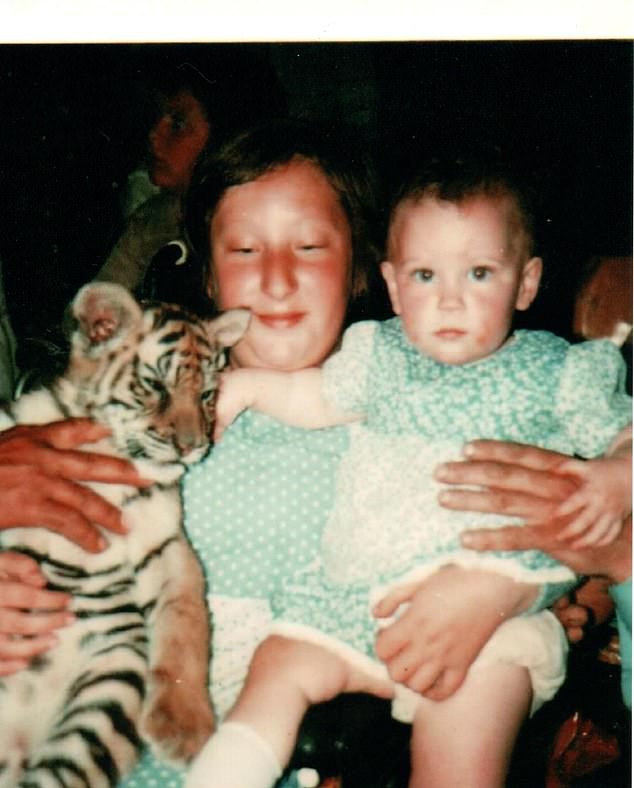 Christine was left devastated when her older daughter Angela died of renal failure at the age of 21 (pictured, Angela and Susie)

She explained: ‘A few years later, Tim was back in hospital after another stroke. I visited him again and he looked terrible.’

He asked her to organise his funeral and asked her to sprinkle his ashes with Sam’s, before passing away just a fortnight later at the age of 65.

She said: ‘Both sadness and relief washed over me.

‘At Tim’s time of need I could easily have turned my back on him. Some might be shocked that I helped him but visiting Tim during his final hours and treating him with kindness felt like the right thing to do. 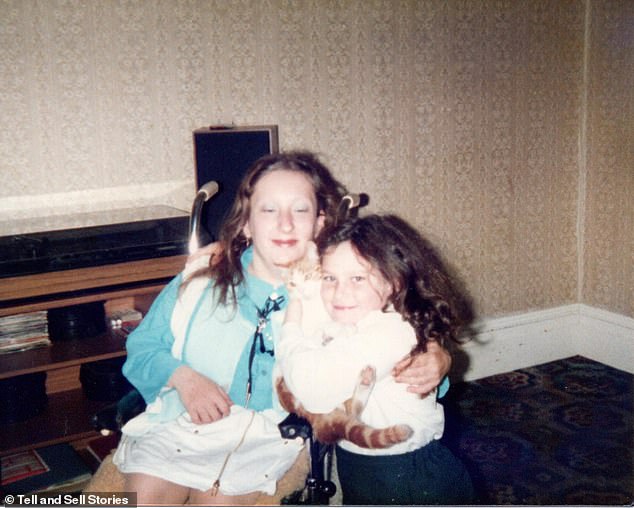 After Angela’s death, the couple went on to foster over 140 children, which they said their daughter Susie ‘loved’ (pictured, Angela and Susie) 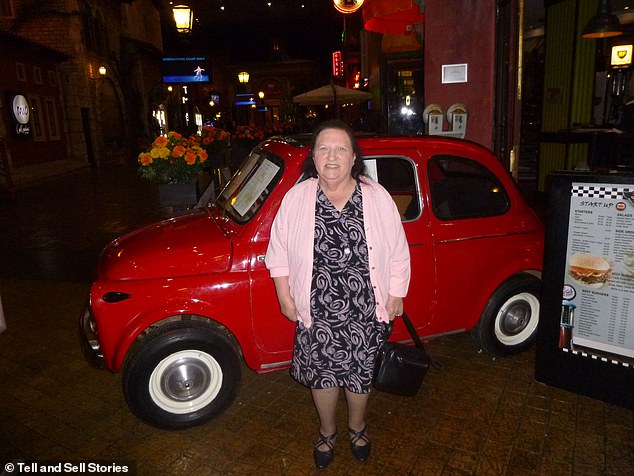 Fifty years later, she visited her brother Tim as he was dying in hospital following a stroke and said it ‘felt right’ to treat him with kindness

‘Even so, I will never forgive him for what he did.

‘I’m just glad I could provide love and support to the 140 teenagers Andy and I have fostered over 23 years.

‘We have given them the happy childhood that I always dreamed of.’

Christine’s book, An Innocent Girl, £6.48, is available from Amazon.

WHAT IS SPINA BIFIDA?

Spina bifida is a relatively common birth defect, affecting about 1,500 to 2,000 babies born in the US each year and around 700 in the UK annually.

During development these structures – along with the brain – all arise out of something called a neural tube, a precursor the entire central nervous system as well as the protective tissues that form around them.

Typically, this tube forms and closes by the 28th week of pregnancy.

But in babies with spina bifida, it doesn’t close properly, for reasons that are not entirely clear yet to scientists.

Instead, these babies are left with a gap in the vertebrae, through which part of the spinal cord may slip, depending the severity.

People with the mildest form of spina bifida – the occulta form – may not even know they have it.

The gap between their vertebrae is so small that the spinal cord stays in place and they are unlikely to experience any kind of neurological or motor symptoms.

In the next more severe form of the condition, called meningocele, the the protective fluid and membranes around the spinal cord are pulled through a gap into a fluid filled sack on the exterior of the baby’s back.

There’s no actual nervous tissue out of place, so there may be complications, but they’re less likely to be life altering.

But in open spina bifida, or myelomeningocele, there are larger or multiple openings along the spine.

Both the membranes and spinal nerves and tissues they’re meant to protect are pulled outside the baby at birth.

The symptoms vary wildly based on where and how severe these openings are.

Some children may develop  little more than skin problems, while other with severe forms may be unable to walk or move properly, or develop infections like meningitis that can leave them with permanent brain damage.

Making sure women get plenty of folic acid in pregnancy can help ensure the spinal cord develops properly.

After birth, surgery to repair these openings may be performed and, in more recent years, some surgeons have begun repairing spina bifida in the womb.