Will Lightyear make it to a future where kids want to watch it over and over again?

I had an odd experience at the press preview of Lightyear, Pixar’s keenly awaited Toy Story spin-off. Lightyear is a kids’ movie, but everybody at the press screening was an adult. With no kids there, I found it weirdly hard to tell whether I was liking the film or not. In the row behind me, there was a famous entertainment reporter with a very distinctive belly laugh. He seemed to like Lightyear a lot.

Did I, though? I could see the film was visually brilliant. Computer animation keeps getting better and better. But was the story any good? Did it have enough heart? I’m really not sure. I can only say I’d have liked the movie more if I’d had a kid watching it with me, especially if that kid had liked it too.

“Everybody in the world was once a child,” said Walt Disney in 1938, shortly after making Snow White and the Seven Dwarfs. “In planning a new picture, we don’t think of grown-ups and we don’t think of children, but just of that fine, clean, unspoiled spot down deep in every one of us that maybe the world has made us forget and that maybe our picture can help recall.” 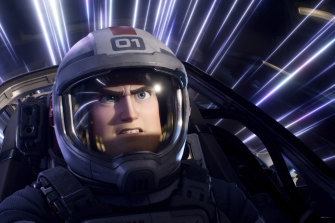 Buzz Lightyear, voiced by Chris Evans, in a scene from the new film.

It’s easy to be cynical about Walt Disney. You could say he didn’t like sharing the spotlight with his creative collaborators. You could say he encouraged America to think of itself as a giant theme park. But when he talked about the enduring existence of the inner child, Disney was surely on to something. “We grow up, our personalities change, but in every one of us something remains of our childhood,” he said.

On this question, I think we must relax our cynicism and admit that Walt had a point. Who among us hasn’t been piercingly moved by a Disney movie at one time or another? Who hasn’t been reduced to a blubbering mess by Pinocchio or Dumbo or The Lion King? These movies may not be great art. But they’re embedded in the weave of our personal histories in a way that better art generally isn’t. In some ways, I find the original Lion King more affecting than Hamlet because it reminds me of a vanished era when there were kids in my life who watched it on VHS almost every day. These days those former Lion King junkies are no longer all that young. And if they’re no longer young, what does that make me?

It should be said that Lightyear is not strictly speaking a Disney film. It was made by Pixar Animation Studios, which has been owned by the Walt Disney Company since 2006. Disney’s in-house animation studios have produced some successful features of their own lately, including Moana and the Frozen movies. But for the last 20 years or so, most of Disney’s animated hits have come out of its partnership with Pixar. 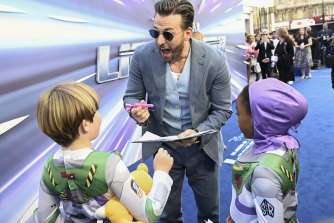 Chris Evans is interviewed by young fans at the UK Premiere of Lightyear.

The Pixar story began in the late 1970s when George Lucas recruited a team of computer geeks to push the frontiers of digital film-making. Their main job was to develop digital editing systems. But the sexier part of their work involved making computer-generated animation sequences for inclusion in films like Star Trek 2: The Wrath of Khan (1982).

Old-school animation is done by photographing thousands of individual hand-drawn pictures or cells. Snow White was made up of over a million cells, drawn by 750 different artists. Computer animators work by building digital 3D models of real or imaginary objects in a software program, so that a virtual camera can swoop around them as if they were solid. Even when viewed on a two-dimensional screen, computer-generated characters and environments look uncannily three-dimensional.

In 1986, Lucas put his computer division – by then known as Pixar – up for sale. It was bought by Steve Jobs, then on the rebound from his first stint at Apple. A big believer in the future of computer animation, Jobs poured millions of his personal dollars into Pixar. His team made some acclaimed short films, but acclaimed short films don’t pay the bills. What Pixar really wanted to do was make the world’s first computer-animated feature.

That film ended up being Toy Story (1995). To get it made, Pixar signed a deal with Disney, which paid the production costs and would effectively own the finished movie. Computer animation is an expensive business. At the time, not even Jobs was rich enough to fund a full-length feature by himself. 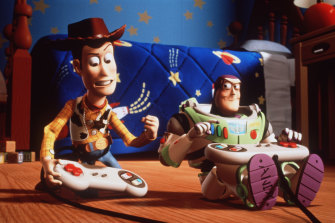 The Pixar-Disney partnership didn’t begin well. Believe it or not, Disney executives kept pushing Pixar to make Toy Story’s script “edgier”. They wanted sassier characters and bawdier jokes for adult audiences. As the script got progressively darker, Tom Hanks, who had signed on to play the movie’s hero, Woody the Sheriff, feared that Woody was morphing into “a real jerk.” At one point Disney almost shut down the production altogether.

In the end, Pixar made the movie it wanted to make, and Toy Story became the highest-grossing release of 1995. The film was premised on an idea that every child must have had at least once – the idea that toys come to life when humans leave the room. On top of that, Toy Story was a buddy movie, which rode the ups and downs of Woody’s friendship with the bombastic Buzz Lightyear, voiced by Tim Allen. There were gags for the grown-ups, but they didn’t compromise the movie’s sunlit tone. And there was Randy Newman on the soundtrack, singing songs that no discerning child or adult could possibly dislike.

Over the next decade Pixar and Disney shared costs and profits on a succession of merch-friendly blockbusters: Toy Story 2 (1999), Monsters, Inc. (2001), Finding Nemo (2003), The Incredibles (2004) and Cars (2006). In 2006, Disney bought Pixar outright. Since becoming a Disney subsidiary, Pixar has continued to make crowd-pleasing and visually stunning movies, including the remarkably original Up (2009) and Coco (2017).

Nowadays most new animated films use the computer modelling techniques pioneered by Pixar. The odd hand-drawn animated feature does still get made. Klaus (2019) was a recent example. But computer animation is the industry default. Indeed, so many different studios are in on the act that it’s hard to remember which films are Pixar films and which are not. 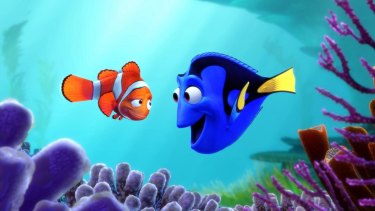 A Bug’s Life (1998) was a Pixar film; Antz (1998) was not. Antz was made by DreamWorks Animation, which also made the Shrek and Madagascar movies. The Rio movies, on the other hand, were made by Blue Sky Studios, which also made the Ice Age films. Then there are the Minions and Sing movies, created by Illumination Entertainment.

If we sometimes make the mistake of calling these “Pixar movies,” it’s because they all use the same basic ingredients that made Pixar’s trailblazing early films so irresistible: robust, big-eyed central characters, as glossy and colourful as ripe fruit; famous stars and comedians doing the voices; and killer musical soundtracks, with new songs for the nippers and resurrected oldies for the grown-ups.

Twenty-seven years have passed between the respective releases of Toy Story and Lightyear. The kids who grew up watching the original movie are adults now, and many of them have movie-watching kids of their own. Movies have changed, and so have our ways of watching them.

In the pre-video olden days, Disney had a quaint policy of keeping its classic movies in a so-called “vault”. Each film would be theatrically re-released every 10 years, so each generation of kids could watch it afresh. Then back in the vault it would go.

Even after the advent of home video, Disney continued to vault its classics. If you wanted to buy Bambi on VHS, you had to wait for years till Disney briefly put it on sale. Fortunately, the Pixar movies were exempt from this policy. You could own a copy of Toy Story the way you owned a copy of a book. You could watch it over and over if you wanted to. 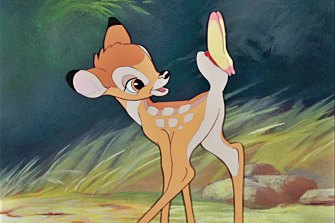 And children seriously wanted to. My eldest niece could operate a VCR before she could talk. If Toy Story wasn’t already in the machine, she would eject whatever tape was in there and rectify the error. She could do this one-handed while using the other to maintain the tilt of the bottle clamped between her teeth. You needed an adult to read a book to you. You didn’t need an adult to put on Toy Story for you.

No doubt kids born a decade later were equally adept at working DVD players. But now, in the streaming age, the idea of physically possessing a movie is fading again. One day the Harry Potter movies are on your favourite platform and the next they’re gone. My newest nephew and niece are well across this phenomenon. They know when it’s time to start lobbying for a new subscription.

Time never stops moving on. It’s a sad truth, and the Toy Story movies caught it beautifully. In the first two films, the toys were owned by a little boy named Andy. In Toy Story 3, Andy was old enough to leave for college. In Toy Story 4, the toys themselves were getting old enough to move on. When Woody left the gang to settle down with Bo Peep, he had to bid a tear-jerking farewell to Buzz.

This brings us back to the new film, Lightyear. Time moves on for actors too. As the voice of Buzz, Tim Allen has made way for the younger and more happening Chris Evans. The official explanation for this is that Allen’s Buzz was an action figure based on a fictional movie character, while Evans’ Buzz is that movie character – still fictional, but one step more real than a fictional toy.

Does all this work? Will Lightyear successfully travel into a future in which children will want to watch it over and over? In 20 years’ time, will families remember it as part of the fabric of their bygone day-to-day lives? Now that the film is out, our kids will start answering that question for us.

To read more from Spectrum, visit our page here.