Jake Johnson missed being around others amid the global pandemic — so he wrote Ride the Eagle, with the hope that audiences won’t miss out on their own experiences.

‘New Girl’ Cast: Where Are They Now?

The indie focuses on Leif, who goes from not feeling anything to feeling something after his late mother, Honey, leaves him with a conditional inheritance. In order to move into her cabin, he has to complete activities she left behind for him to do.

Johnson, 43, teamed with director Trent O’Donnell for the movie, which they filmed near Yosemite. “Deep down, when Trent and I started talking about a movie, it was just that we missed people,” the actor exclusively told Us Weekly on Thursday, July 22. “The world had shut down with the pandemic and my industry had shut down. So everything was kind of done. And we realized we just wanted to make a movie because we love making movies the way we made projects — both of us, individually — when we first started our careers. And that is, you just paid for it yourself.” 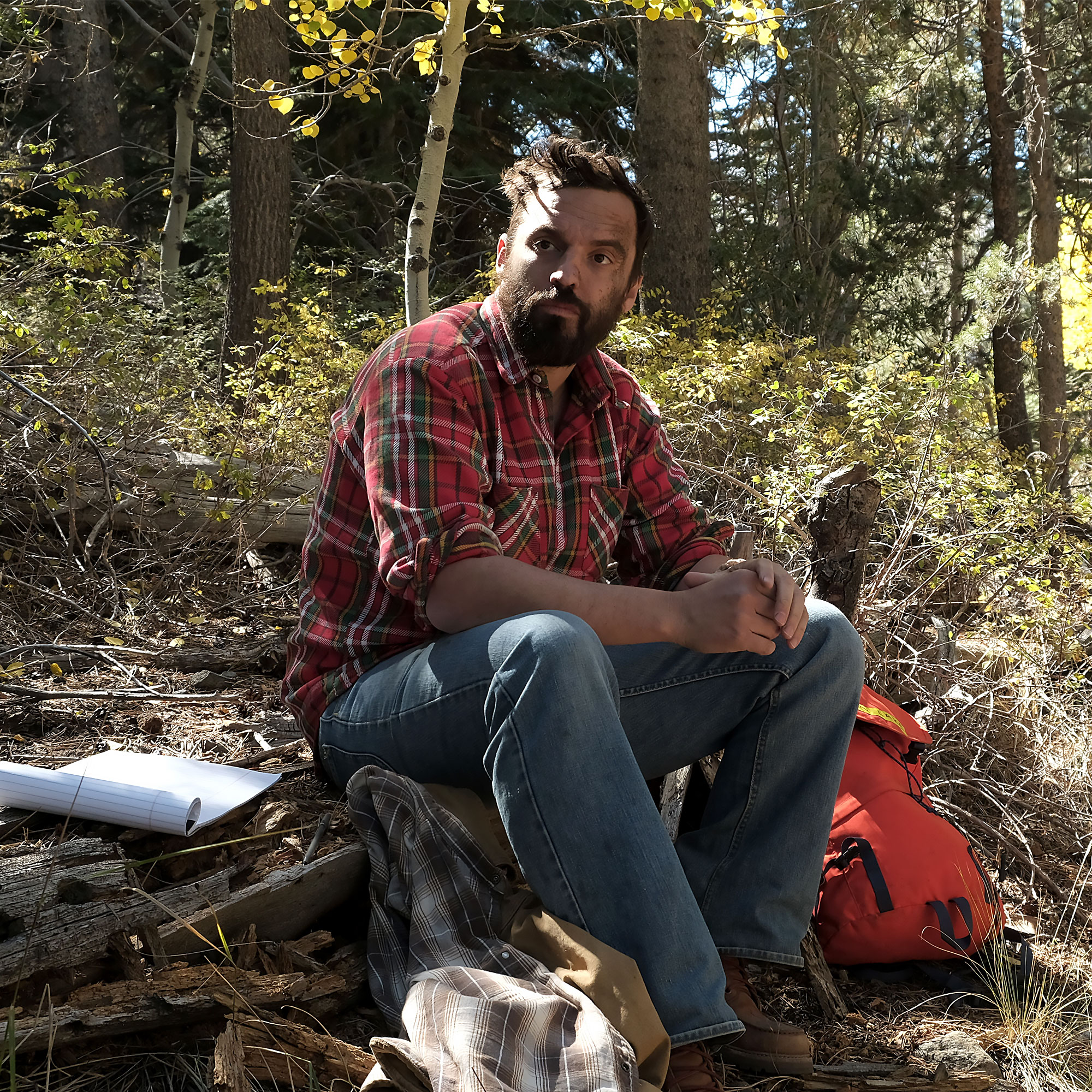 The Tag actor and O’Donnell, who previously worked on New Girl together, “didn’t want to do one tone” for the project, so having the creative freedom for it was a plus.

“If you pitch something, a lot of times it needs to be one thing. You’re pitching a comedy so that you can sell a comedy or a drama so you can sell a drama,” Johnson explained. “I like the parts of this movie where it feels scary. I like the thriller aspect of it. I think it’s a sad movie, but I also think there’s some nice bits in it. So we just wanted to make a movie exactly how we wanted it to make it. And we didn’t care if we competed and made great money or we didn’t make great money. We just wanted to work really badly because we really missed being around each other and working.”

Susan Sarandon, D’Arcy Carden and J.K. Simmons round out the cast, with Sarandon, 74, playing Leif’s mom. Much like her character, Sarandon taped her footage alone while Johnson remained on set.

“Susan and I did everything so independently. All her stuff was filmed in New York. I wasn’t there. just the director was. So my favorite parts of working with Susan was our rehearsals because we would do these big calls where she would read the script and study it and she would have these really thoughtful questions,” the Minx star explained to Us. “My favorite part of working with Susan, apart from being an enormous fan of hers and watching her stuff was incredible, was really just engaging with her and learning from her as an actor of how to ask great questions and really study a character and how she kind of sunk her teeth into this character. There was a certain point where Trent and I talked after one of the calls and said, ‘We no longer have to worry about Honey. Honey now belongs to Susan Sarandon. It’s hers.’”

Johnson was just as impressed with Carden, 41. So much so, that she got more than an acting credit on the film.

“She worked so hard on this with us,” Johnson said. “I don’t like to talk about the prep too much, but she rehearsed so much and gave so much that we ended up making her a producer on this. It was honestly, she earned it. She just grinded her ass off. And so she recorded her stuff essentially alone. I think I was on the phone for some of her takes, but all my stuff, we couldn’t get her because we didn’t have a cell reception at the cabin. So I did mine based off her memory. And Trent was sometimes saying it, but we had to kind of fake that chemistry and go off of memory.” 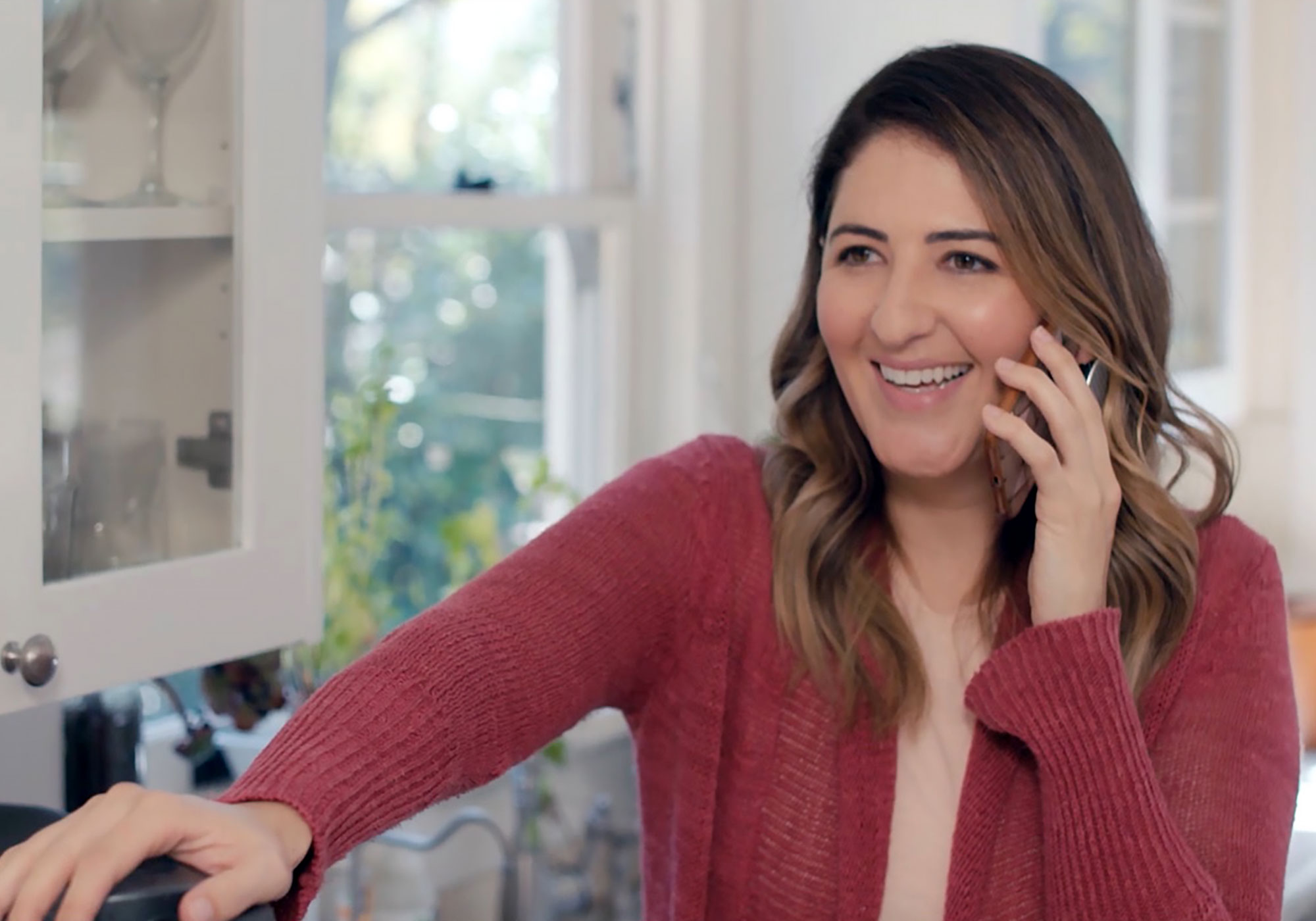 One of Leif’s tasks is to call the one “who got away,” who happens to be Audrey, played by the Good Place actress. Their effortless banter made it an easy decision to lock Carden in.

“That was a big part of casting her and rehearsing with her,” Johnson noted. “We needed it to feel like ad-lib and we needed that chemistry to feel like we were just talking.”

Although the Drinking Buddies actor can’t relate to Leif’s entire background, he can “see a lot” of himself in every character he plays.

“I don’t know how to act without bringing myself to the table. I don’t understand acting if you don’t,” he admitted. “I think some people can, but, like, I don’t know what the hell I’m doing if it has nothing to do with my own spirit. … My mom’s one of my best friends, so I don’t relate to the journey he’s on. I’ve also been with my wife [Erin Payne] since 2004, so I don’t relate to the path that Leif is on, but Leif’s spirit and my spirit are very similar.”

It was also easy for Johnson to connect with Leif’s furry companion, Nora, which is actually his dog in real life.

“She had a terrible attitude, like all great actors you’re dealing with. We’ve all known that, like, certain stars insist on green Skittles or whatever in their trailer. She was tough, man … No one was allowed to make eye contact with her,” Johnson joked to Us. “Here’s the truth though: She was a retired guide dog. We got her in the pandemic from Guide Dogs of America. So she had guided a woman in Oregon and has the ability to make decisions. She’s incredibly smart, but now she’s retired. And so I kind of felt like this was her last hurrah. She got to show me how great her brain is. Because since we wrapped, she is fully just a dog. She is no longer exceptional at all. She’s just, like, now a straight-up old lab. But I saw the greatness in her because guide dogs are truly great. They’re phenomenal animals. So we got one last hurrah. I think this performance could be called her last waltz.” 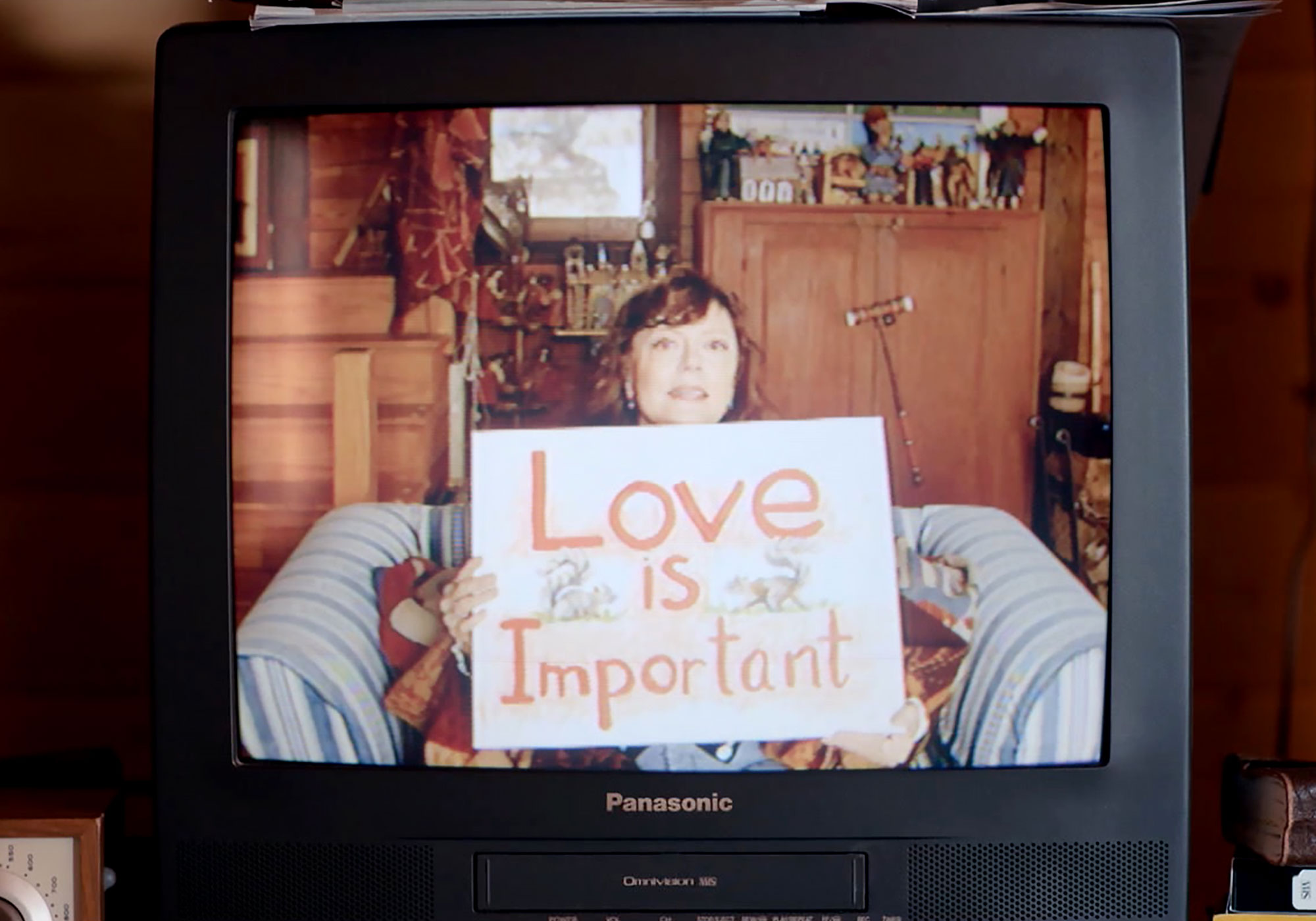 And to Nora’s credit, it was Leif’s attachment to her that made a shift in him when she goes missing.

The Stumptown alum continued: “And the thing about Leif is in the end, he should’ve gotten over his bulls–t with his mom a lot sooner. Not because of some moral obligation to forgive, but more so [because] he would have liked her. If he could have got past that stuff in the past, he would have had a lot of fun smoking a joint with her and taking a hike. It would have been fine. So the kind of story we wanted to tell was just, like, you’re missing out on fun.”

Celebrities With Their Pets

Although Johnson was alone for most of his scenes, he hopes that Ride the Eagle doesn’t feel like it was actually filmed during the COVID-19 outbreak.

“I prefer to be with more actors. I like working with actors. I like feeling people’s tones and energies. I realized during the pandemic how much people inspire me. But we didn’t have a choice because of the pandemic. Everyone had to be separate,” he explained. “But our main thing for this movie was we didn’t want it to feel like a pandemic movie. We want somebody to be able to see this in a couple of years and not realize we made it pre-vaccine. So even though everybody is pretty alone and spaced out and we were very careful, we just wanted to feel like a quiet little indie.” 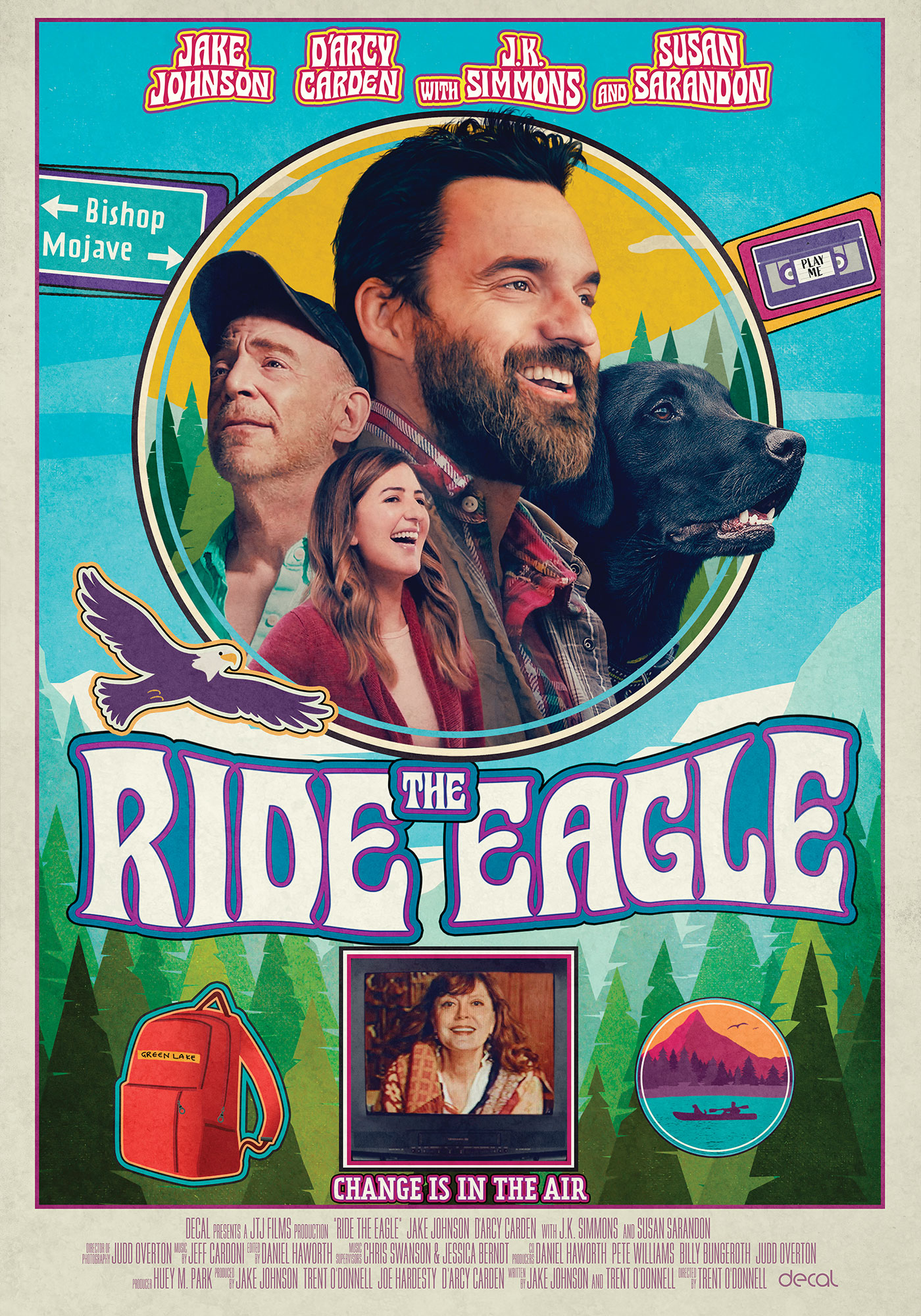 Johnson studied creative writing at the University of Iowa and studied dramatic writing at New York University. He’s since written several other projects, including Digging for Fire and Win It All.

“I love acting. I love acting when I’m not writing. I like acting where I’m just in somebody else’s vision. I do like acting when I’ve written it. But I did come up as a writer,” he told Us. “I was an aspiring playwright when I first started. So for me, I always need the mix. If I do one too much, I think I get a little bit bored. I would get bored if I didn’t act for too long. I like being on set. … It’s all about opportunities. It’s hard to pitch something and get something made. I hate development. So I would rather not develop for a year and a half with a studio. I don’t like doing all of the notes and all of that.”

He added: “I’m happy to act in the bigger things, but I’ll probably stick to writing the smaller things.”

Decal will release Ride the Eagle in theaters, on demand and digital on Friday, July 30.