​​Looking out at thousands of people, I took a deep breath.

I was centre-stage at Ronan Keating’s 1999 Wembley concert at the age of 16, and so vulnerable.

Even though the bright spotlight was on me, I could read each and every face in the audience while they waited in anticipation. Suddenly, I saw them clapping, cheering, talking and singing but I couldn’t hear a thing because I’m Deaf.

My eyes glanced to the foot of the stage at the interpreter, who cued me in when the music started. I unleashed all my frustrations, passion and my soul into a powerful visual signed performance of When You Say Nothing At All.

When I finished, I felt liberated, strong and confident. I also felt proud to have literally opened their eyes and involved them in experiencing music in a silent world – a dream I’d had since I was nine years old.

I was born into a hearing family that had no experience of deaf culture, identity or British Sign Language (BSL). I grew up thinking I was hearing – partly because my parents were in denial of my deafness.

I would often feel left out and didn’t learn BSL until I moved schools. Most of my educational years were spent being denied access to things because of my deafness or having a lack of communication support.

I was about nine years old when I experienced my first brush with music. With my hearing aids, I can hear some noises and as such, one day I was coming down the stairs at home and heard something new.

I was intrigued because I knew it was a voice, but it wasn’t talking, it was something else. I asked my mum what the noise was, and she told me it was a singer called Celine Dion, while pointing at the silver and brown stereo it was coming from.

The voice was strong and beautiful and my mum explained what singing was – from that moment, I was hooked.

I used to watch music videos on MTV and I would think, ‘I wanna be famous like them’. But I couldn’t sing so SignSong was born.

SignSong is the translation of song’s lyrics and performing them in sign language. The emotive and captivating performance gives Deaf people access to the songs, while hearing people have the chance to experience the song both audibly, but more intensely, in a visual and powerful way.

I struggled for years battling mental health issues such as anxiety, depression, suicide attempts and self-harm because so few people around me could sign. I had low self-esteem and confidence so hid myself away.

Learning lyrics to songs and translating them into sign language saved me.

The process is fairly involved. English is my second language so I have to listen to the sound of the voice (singing) and follow the lip patterns to learn the lyrics. Then I translate the lyrics into BSL, but not word for word. As part of the performance, I also sign the meaning of the song, and the context between the lines, as BSL doesn’t follow spoken word patterns. 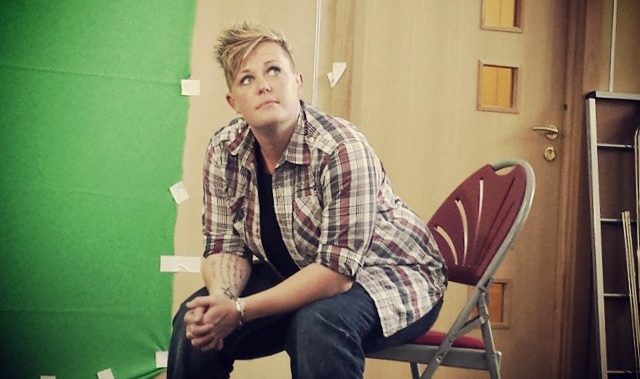 It takes me about two weeks to be perfect. This is what I owe my life to, as through my darkest days, the music kept me going.

I even auditioned for Britain’s Got Talent about four times but got rejected each time. I remember one of the pre-televised judges saying, ‘How do we know what you’re saying?’, while another remarked, ‘Are you making it up?’

Their reactions really disappointed me and knocked my confidence. Despite this, I have kept plodding onwards and upwards and my career has gone from strength to strength.

Some of my favourite songs that I’ve turned into SignSong are Anne-Marie’s Perfect To Me, Mariah Carey’s All I Want For Christmas Is You, Christina Aguilera’s Hurt and even Football’s Coming Home when the Euros were on earlier this year.

A definite highlight for me was being nominated for a Pride of Britain award in 2013 and reaching the final five. I felt honoured to have met Prince Charles through the Prince’s Trust.

I’ll also never forget a poignant moment when Ronan walked toward me while I was performing, I lipread him saying ‘Alright?’ with a smile and he hugged me.

Then in 2021, I was invited by Premier Inn to work on a very exciting project called Sign of the Season, a Christmas choir challenged with creating a medley of Christmas carols that incorporate British Sign Language. They wanted to do this to make sure it is accessible to those who have deafness and Makaton for those with learning or communication difficulties.

What’s particularly great about this project is that this isn’t a song just for deaf people – it’s really designed for everyone. Hopefully it will help shine a light on different groups, break barriers and bring people together. Above all, it’s about fun!

My role was to work with the Some Voices Choir, Strictly Come Dancing choreographer Sean Moon and the incredible kids from GOSH to blend the classic carol medley with SignSong. It features songs like Joy To The World, Deck The Halls, Jingle Bells and We Wish You A Merry Christmas.

Through the tutorials we created, we hope to get as many choirs in the UK as possible to learn the new fun and inclusive carol, to raise awareness of the importance of arts in the deaf community, and to raise funds for the amazing team at GOSH.

I think there’s a lot that needs to be done to dispel the belief that deaf people cannot enjoy the arts. I believe that my work is a testament to the fact that this is not true and raising awareness of this will help change perceptions.

According to the charity, SignHealth – an organisation dedicated to promoting easier access to healthcare and information for the deaf community – up to 50% of the deaf community in Britain experience mental health problems, with rates of anxiety and depression almost double that of hearing people. I believe that by having equal access to music, it would reduce these numbers significantly by providing an outlet for emotions.

As for me, Performance Interpreting – a company that provides and manages British Sign Language interpreters for music, sports and entertainment venues across the UK – contacted me recently and asked if I would like to work with them to perform SignSong to Ed Sheeran songs next year 2022 at Wembley!

This is a dream job for me as I’ve been waiting for over 20 years to perform or teach famous artists how to sign their songs or perform them myself.

Every time I perform, I feel like I’m on cloud nine. The feeling of doing what I’ve always dreamed of leaves me a bit overwhelmed and is still hard to believe, but is still as exhilarating as when I first began.

Hopefully I will be involved in more of this in the future.

In this exciting new series from Metro.co.uk, What It Feels Like… not only shares one person’s moving story, but also the details and emotions entwined within it, to allow readers a true insight into their life changing experience.