An Arkansas wedding photographer has shared three signs that a marriage is in trouble from day one.

Shayla Herrington said she learned the signs from a fellow photographer in the industry with over a decade of experience, who has seen plenty of wedding over the years.

The elder photographer pointed to three red flags one might see from newlyweds on their wedding day — including odd photoshoot practices, cagey friends, and a spouse who is a bit too intent on working the room. 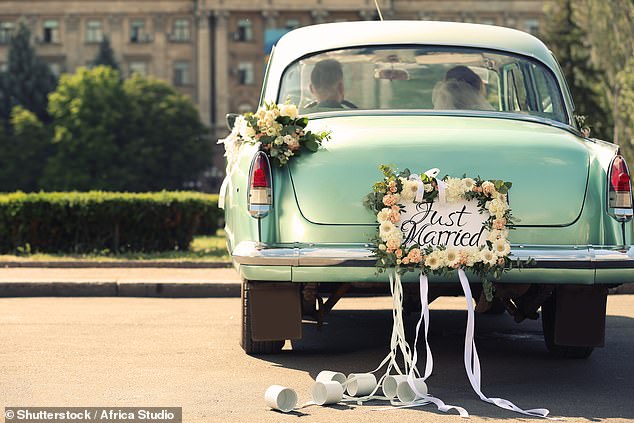 Uh-oh! An Arkansas wedding photographer has shared three signs that a marriage is in trouble from day one (stock image)

Three red flags that could spell a doomed marriage

‘One time I was shooting under this wedding photographer, and they told me they can always tell if a couple will last or not, based on three things,’ Shayla said.

‘Mind you, this photographer has been in the industry for 10 or 15 years, so I was really interested to hear their theory on this.

‘The first indicator is one of the spouses will take, like, more than three family photos without the other spouse,’ she said.

‘This one kinda makes sense to me, just because you might get a few with your mom and dad, but to kick them out of more than three photos just seems a little suspicious.’

According to the photographer, the next red flag comes not from the bride or groom, but from the people in their wedding party.

‘The second indicator is the bridesmaids or the groomsmen will avoid talking about the spouse when they’re getting ready or doing toasts or anything, and that’s typically because they don’t like them,’ Shayla continued.

‘And the last indicator is one of the spouses will spend more time with friends or family at the reception rather than with their spouse.

The video has earned over 20,000 likes, as well as hundreds of comments — including some who said the red flags were accurate.

Most seemed to agree that a spouse spending more time with their friends and family than their new husband or wife was a problem.

‘My hubby spent more time with the taco bar than he did me at our wedding,’ said another.

Some shared their own red flags, like spending a lot on an extravagant wedding ‘like they’re trying to put on a show for everyone.’ 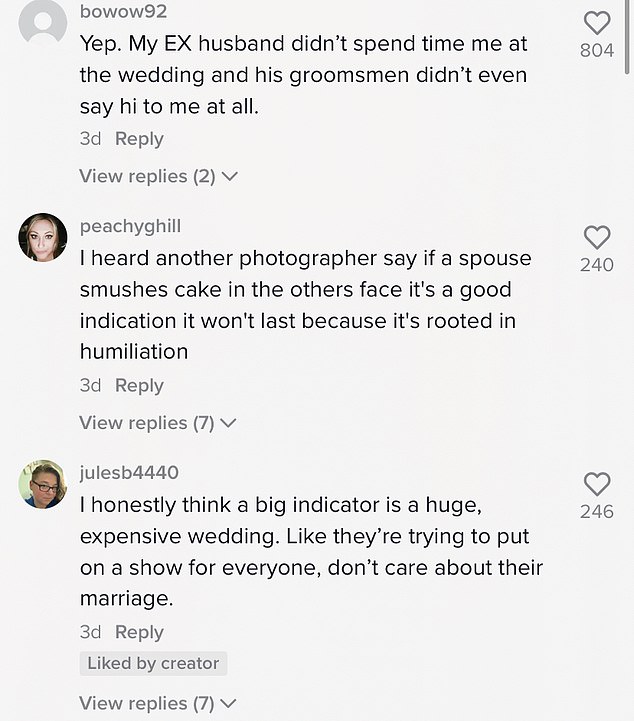 The video has earned over 20,000 likes, as well as hundreds of comments -including some who said the red flags were accurate

Some were less convinced, particularly on the point about family photos.

‘I think the photo one is farfetched especially if siblings want a picture all together and the parents and maybe grandparents, it can be more than three,’ wrote another.

Others expressed doubt that a photographer meeting a couple one time could possibly know how their marriage turned out.

‘I’m not understanding why a one-time session will tell you what will happen in the future. SO many different kinds of weddings,’ wrote one.